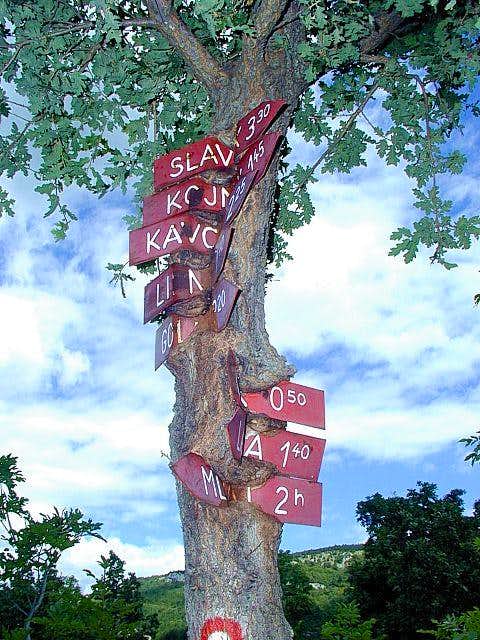 This table-eating-tree shows that below Slavnik hills there are many marked paths and hiking options.
« PREV NEXT »

This tables must be very tasty or tree is very hungry :-) I've never seen something like this, very interesting!

I guess these karst oaks are used of anything to survive. And some iron is probably good for digestion :-)

Sasa, today I had another fine ski tour - in Austria. But who says they have snow! I was again in Nockberge and they were bare as usual. Did I tell you, that on Sunday from Sneznik I saw Velebit? What do you think - is Sneznik worth having its own page? It has sooo nice forrests and I have some fine pictures :-) And I don't care if some expect only rocks and glaciers.

I am wondering why Sneznik doesn't have its page already Vid and I don't know what are you waiting for! :-) As I said it is highest and most important SLO peak outside of Alps. Well, since Sneznik is so beautifully visible from North Velebit then you probably saw Velebit. It should appear much higher in the distance than Gorski Kotar which is in front.

Yes, that corner of Austria has very little snow. It is really strange and I'm wondering why it is like that? I know situation well because I'm writing down Villascher Alpe weather daily for years now. Currently there is only 33cm of snow there and Nockberge is in similar situation. It is the same year after year. It rarely goes above 50cm. This winter it reached 70cm but it didn't last long. Even that winter when Julians had 7m of snow there was around 50cm on Dobratsch!!!!!! Now that is crazy! :-) And distance is really symbolic. It seams Hohe Tauern on the north and Julians on the south take away all the snow! Don’t know what else could be the reason. Even Velebit has so much more snow than that part of Austria.

And now you have to wonder what all of this has to do with the 'table eating oak' above :-)

Of course it has! The oak is listening carefully. He is very interested in such discussions, because, don't forget, he's a mountaineering oak ;-)