Slavnik and the Karst Edge

The Istria penninsula is seperated from the European continent by a hilly barrier which features a very different nature of landscapes on both sides. The true Mediteranian landscape begins when you cross the Karst edge. There are two reasons to mention these mountains: (1) they are a paradise for hiking, especially in 'out of season' times, (2) their short walls make one of the finest polygons for technical climbing. While it is unlikely that in the future each hiking summit would get its own page, it would be very desirable if each technical climbing resort would get its own page. Here, I'm giving just the overview of the Italian and Slovenian part of the Karst edge and of Slavnik hills above it. The Croatian part is much unknown to me (but see also the Učka page and the Čičarija page).

The Karst edge begins at the north-west with the Cliffs of Devin. This is the only place, where the white limestone walls are rising directly out of the Adriatic sea. Further to the east, the cliffs of the Karst edge are indented a few hundreds meters towards the inlands, allowing traffic to run by the coast.

Just above the big city of Trieste/Trst a special natural phenomenon is hiding - Val Rosandra / Glinščica is a beautiful valley with some low rock formations, useful for exercising technical climbing. There is, where Emilio Comici was exercising.

Close to the Socerb castle the Karst edge continues on the Slovenian territory. Not far away from the border, above the small village of Osp, there are two famous walls, where technical climbs of the highest quality can be experienced - Osp wall and Mišja peč.

Further towards the southeast, beyond the big, elegant bridge of the main Slovenian highway, the Karst edge continues with the walls above Črni Kal village. The hardest technical climbs can be done around the ruins of the ancient Venetian castle and more towards the southeast.

Going further south-eastwards the Karst edge falls down to Rižana valley in two bigger steps. Above the steep walls are rising over the Podpeč village and below there's a similar wall called Štrekljevica. Over both walls runs a secured, marked path. Štrekljevica would also be appropriate for hard technical climbing, but it is prohibited, because there are still a few rare birds nesting.

Still further down, the Karst edge is less and less appropriate for technical climbing, but it remains a nice hiking area. As I shall describe only its Italian and Slovenian part on this page, let me stop here.

Above the Karst edge rock steps there's another landscape. A mostly flat grassy plateau is stretching towards the hills of Slavnik and its surroundings. Here you can find a few remote villages, but further towards the southeast the landscape rises again and amongst the hills there you can find some remote places where the only Slovenian savannah stretches. In spring, around the Zalipnik valley some first class hiking goals could be enjoyed in the abundance of flora. Below the rock steps of Karst edge lie the fields and villages of the inner Istria. Limestone is being replaced with flysh, only a few limestone rock outposts can be found in various locations. Some of them will be shortly described here.

There are no limitations for hiking around, but some walls (like the mentioned Štrekljevica) are closed for climbing. Also the area below Slavnik is included in the Natura 2000 - the EU project for protecting certain areas of nature. This was also one of reasons that in spite of often strong winds (burja) the idea of setting up here windmills powerplant was abandoned. Luckilly!

Any time of the season.

On Slovenian coast there are many possibilities for camping. The only mountain hut in the area is standing on the very summit of Slavnik. It is called Tumova koča, it has 8+20 beds and is accessible by car.

The Cliffs of Devin

These white limestone cliffs are rising directly out of the Adriatic see. I have no information of technical climbs in these cliffs, highlights of this region are the following: High on a vertical rock the old castle is standing. The area is closed for visits, but the romantic ruine is very worth climbing over the gate (or fence). Close to the old castle the new one is standing - also high on the cliffs. Over the whole are of cliffs the Rilke marked path goes. It is very panoramic and frequented, to return back, you can also take a bike with you.

From Opicine/Opčine towards Monfalcone a nice panoramic path/road goes. It can be done by bike. Above and below it there are many appropriate cliffs where technical climbs are done. 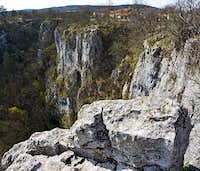 Risnik sinkhole
Not only classical crags and walls are interesting for climbing. There are also examples of collapsed big caves, showing nowadays high limestone crags. One of the most famous collapsed caves (in Slovenian language the term 'koliševka' is used) is Risnik, just south of Divača. The cave was supposedly created by Reka (river) which today flows nearby, but deeper underground. Then due to erosion its ceiling collapsed and today we can admire a big sinkhole with the average diameter of 220 meters and average depth of 72 meters. Vertical walls are all around the cave, only on one place you can descend into it by gravel. In the walls 35 one-pitch climbing routes are arranged. Their difficulty varies from 4b to 8a. Here is the link to a useful web page. 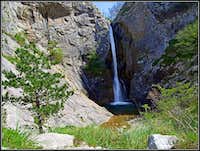 Waterfall
It's so unusual that just behind such a big city as it is Trieste/Trst you can find such an unspoiled pearl as it is Val Rosandra / Glinščica. If you start in Boljunec, in the mouth of the valley, you first walk along the remains of an ancient Romans' aquaduct. Deeper in the valley you reach the romantic church of Sta. Maria. It is worth climbing also on Cima Comici above it. It offers a nice panorama on the valley and the city of Trieste/Trst. Still deeper in the valley a nice 20 m high waterfall and a gorge is hiding. In this area the cliffs are already high enough for climbing routes. A few hundred meters deeper in the valley there are a few houses of Botaccio/Botač village, one of them being also a restaurant. From the village a few paths ascend up on the panoramic edge of the valley. The shortest path crosses also the ex railroad, which is now arranged for biking. Search for the climbing web page here. 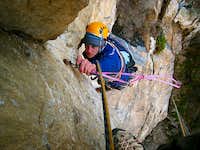 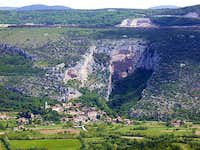 Osp
The first thing to mention of this area is a strong Socerb castle from which you have a grest view on the bay of Trieste/Trst. Above Osp village there's a high wall, which is the most famous polygon fot technical rock climbing on Slovenian coast. Actually this (and Mišja peč as well) is a huge ex cave, which collapsed many years ago. Search for the web page here. Mišja peč is similar, lying a bit more towards the east and above the valley. It is especially popular in recent times and also offers very hard climbs. Search for the web page here. And one more landmark for ordinary tourists: above on the karst plateau there's an entry into a nice Vilenica cave. It is finely decorated and known also by the annual international meeting of poets. 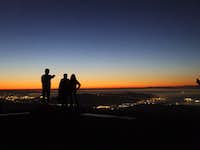 alex_vega - Trst/Trieste from Socerb
This village is interesting, because its church tower is leaning, like the famous tower in Pisa. Above the village, the walls of the Karst edge offer nice technical climbs, such as: Search for the web page here. It's perhaps the post popular climbing area in the Slovenian littoral part. Suuny, with good rock, perfectly secured. There's also interesting natural and archaeological heritage in the area. More towards the west there's another interesting point of visit - the Socerb castle, nowadays a reastaurant, which offers an excellent view on Trieste/Trst and the surroundings.

A nice bike&hike proposal would be: Leve your bikes somewhere above Črni kal. Drive with car down to Hrastovlje village (see the church) and leave it there. Hike by the marked path to Zanigrad village and up to the wall of Štrekljevica. It is crossed by a nice ledge, above which you can explore also ruines of an interesting refugium. After crossing the road and Podpeč village climb over the wall above it. You can also visit the Venetian tower. Then follow the upper edge of walls all the way to above Črni kal. Bike down by the main road to Hrastovlje. 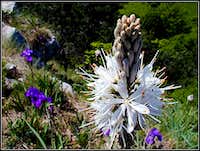 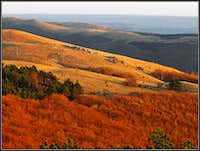 Slavnik slopes in evening light
You can ascend Slavnik on many different ways: by bike, even by car, or by any of marked or unmarked paths, leading to its top. Whatever your choice, go there in a clear day and enjoy its broad panorama: from the Adriatic sea, to the high Dinaric elevations, like Učka and Snežnik, and to Julian Alps and Kamnik Alps. You can hike-up Slavnik any time of the season, but perhaps the best time is late spring, when its slopes are covered with blossoming flowers. Perhaps even more nice that Slavnik itself are lover hills and the savannah landscape, lying SE of Slavnik. Bike into the valley between Lipnik, Kavčič, Golič and Kojnik end of May and you will be allways returning to these places!

Raven Kras and The Ears of Istra

The name means: 'The Flat Karst'. It lies one step below the Karst edge and offers some nice hiking or biking over a remote area. Once we were four, two pairs, biking over a cart-road towards Movraška stena (wall). Both men were trailing and suddenly decided to continue biking naked. Seeing us catching-up, the two ladies were so surprised that in their shaking hands no camera worked any more. Raven Kras iz lying on a step above, north of Movraž valley. On the other side of the valley there's a smooth hill, hiding some more interesting things. If we start the tour on the bottom part of the valley and go around the hill, we first reach a nice stone window and then huge overhanging cliffs, called The Earth of Istria. They were created in distant past by a flowing water, something, which is hard to imagine today. Over these overhangs some technical climbs also go. The path proceeds below them, reaches the abandoned eagles nest and climbs over the cliffs. Nearby is worth visiting also an interesting cave. On the hill a cute church of St. Kvirik stands. Once we were spending a night there in a tent. Early in the morning we started walking along a collapsed wall, the only visible remains of a prehistoric castellum. We were surprised how long the walls were. It must had been a big town, which is today still undiscovered. 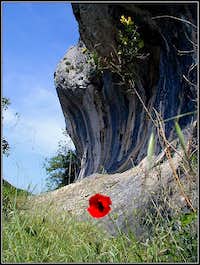 The wall near Dragonja
More towards the south there are some more stand-alone limestone cliffs. I'm mentioning them only to post a picture or two. Otherwise they are famous also by some endemic plants.