The standard route for ascending and descending Antoinette Peak is the east ridge from the pass at the head of Swift Creek. There is nothing wrong with this route; although quite steep, it is very scenic and, at just Class 2, not technically demanding.
However, if, like me, you enjoy finding different ways up and down peaks for variety of scenery, personal challenge, and a sense of discovery, you might consider the Tilted Valley route for a leg of your outing. While the trail up Swift Creek is never crowded due to its steepness (it averages over 700' of elevation gain per mile over five miles) and the fact that the Gros Ventres just do not attract hordes of hikers, the Tilted Valley route will all but assure you of solitude while also shaving some distance from your day. This route joins, or departs, the east ridge of Antoinette between a prominent false summit and the summit itself.
It doesn't take a Mensa-worthy IQ to locate the route, but I'm still making it a little harder by not including a map and diagram. The area this route goes through is pristine, and I want to do my part in keeping it that way while providing the intrepid-minded with some useful information.
Tilted Valley is not the official name of this location. It is the pet name my friend wyopeakMike gives it because of all the tilted strata on display, and I've named the route such as a nod to him. 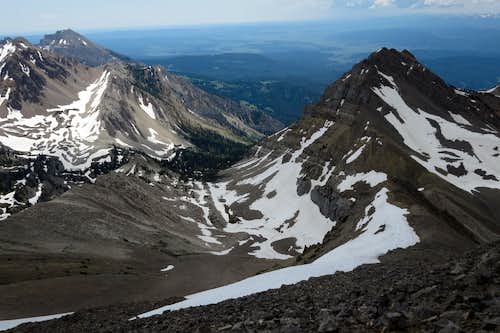 About 11 miles southeast of Hoback Junction, look for a signed road heading north into the Granite Creek Recreation Area. This gravel-and-dirt road, which can be a little rough but is still passable for most passenger vehicles, follows Granite Creek for 10 miles to Granite Hot Springs, a popular spa (admission fee required). Along the way there are spectacular views of Granite Creek and the Gros Ventre Range.

I really do not recommend this as an ascent route. The upper basin is steep, loose talus that would be horrific to go up unless it were covered in snow. And you can't tell from the trail if the upper basin has snow. You can, though, count on snow in the middle of the basin/valley well into summer, maybe all summer most years. But as I descended the slopes, even though I had my ice axe in hand, I never felt the need to glissade; it didn't seem steep enough to discourage hiking and "foot skiing."
Although I used this route for my descent and recommend it as such, I will describe it from bottom up, and the photos are laid out that way as well. After all, this is a climbing site, right?
One-way distance from the trailhead is about 5.5 miles, with around 4600' of elevation gain.
Hike the Swift Creek Trail for 4 miles. As the trail approaches a small cascade on Swift Creek, leave the trail, descend to the creek and cross it, and then pick up what here is a trickle of a drainage entering Swift Creek from the west. The photo below is from the confluence and shows that the drainage quickly becomes more apparent as it climbs. 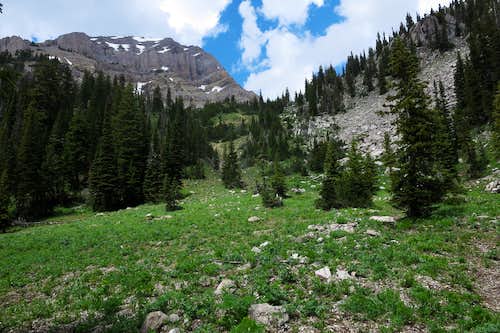 The Confluence
Note: Swift Creek is aptly named. In early summer, it may be too deep to cross.
Now just follow the drainage as it widens into a significant valley and basin. Ascend to the head of the basin and gain the east ridge of Antoinette just west of the false summit. Now the true summit is just a few minutes away.
Note: There probably will be a large snowbank on the ridge where you access it. While it shouldn't be a problem to ascend, be aware that the other side may be heavily and abruptly corniced (it was in mid-July of 2014), so don't hit the crest and then go dashing over to see the view on the other side; make sure you stay where you know ground is beneath you. 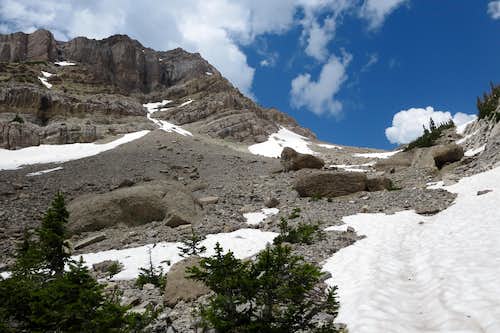 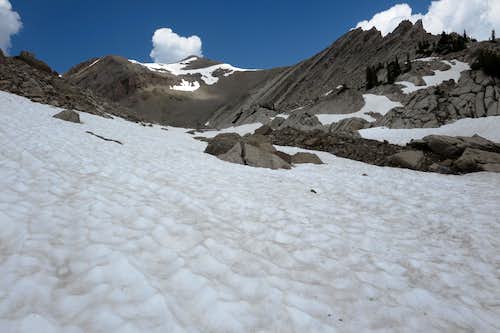 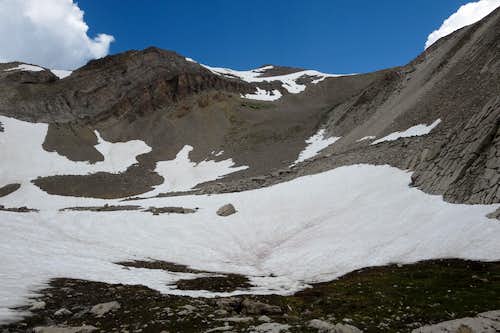 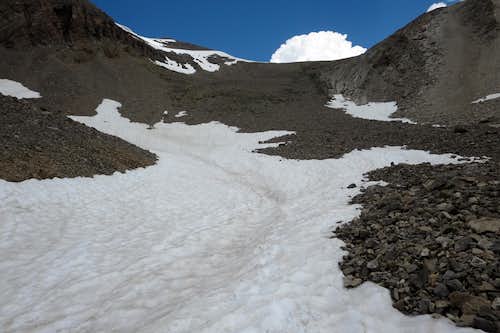 Ice axe. Although I used this as a descent route, I never felt the snow was steep enough that I would have wanted crampons had I been ascending it. However, this is your call to make, as you won't be able to preview conditions from the trailhead. Microspikes might be a reasonable compromise.