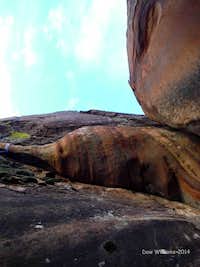 2nd Pitch Start
Blood Wall is one of the better hot weather trad climbing destinations at Red Rock. As long as you can tic off the canyon approach (Oak Creek) early in the morning, the elevation gain part of the approach and the climbing itself is almost fully shaded no matter the month. From the viewpoint of Eagle Wall or upper Solar Slab, Blood Wall looks to have some of the better varnished rock in the park. However once you are into it, unlike the Brownstone Walls, even though you are climbing a lot of brown and red rock, it is covered in quite a bit of north facing moss which results in weakened sandstone. Blood Wall has two clean walls, left and right, with an unattractive section in between. 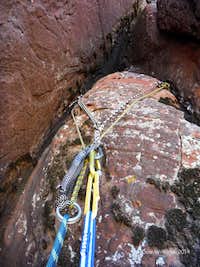 Lower Rap Station
That being said, the length of the splitters on this wall is quite impressive by Red Rock standards. Seppuku (5.11) is an excellent route, Impulse (5.10) a decent outing and Transfusion (5.10) not so good. These three routes are stretched out across the upper “blood” colored walls on Cactus Flower Tower’s north face. This area was one of the last to receive any development at Red Rock with these three routes established in 2006. A new route is being developed (this might be an abandoned rope at this point)  to the left of Seppuku as of 2014.  Bob Goodwin and Merlin Larsen established Transfusion which is the east furthermost route on Blood Wall.

I scoured beta for the approach from on line sources as well as Handren’s guide but little of it there was, it was not very accurate or helpful. I can say I have now tried several options and believe the best option to also be the most technical therefore avoiding some of the heavy bush. Hike almost to the junction in Oak Creek canyon (right goes to Eagle Wall, left is the preferred descent off of Mount Wilson and Cactus Flower Tower). Angle back left (east) as you gain slabs above the canyon floor. Keep angling up at all times. The first technical slab I crossed had a lot of chicken heads, maybe class 4, low 5th. That slab lead to a tall corner up and left. The mossy corner goes at about the same grade but with less exposure. Continue to traverse back east and up any easy features you see to avoid the brush. If you are heading for Impulse, you are aiming for a shoulder on the very west side of the right blood wall. From below you might worry that it cliffs out because you have no vision beyond it, but it gently lands you into a gully directly below the right blood wall. The last section to gain the shoulder involves a short bit of low 5th class.

You might wonder why not just gain this upper gully from directly below the wall and scramble up from there, however, this gully cliffs out below from where I intersected it. There is a fixed rope on the steep water worn slab below but it is not in usable condition as of 2014, rappelling or ascending. If doing Impulse, you are best to walk off the back of Cactus Flower Tower for your descent anyway. If heading for Transfusion, you need to stay much lower on the approach and skirt that water worn slab with the fixed rope and ascend several bush choked short gullies to the east that lead straight for the wide chimney that is Transfusion.

1st Pitch- 150’- 5.9/ Stem up the varnished chimney to a short off-width section (crux of the first pitch). Pull/stem through a roof right above the off-width and continue up to a significant sloping ledge under a large roof. Handren’s guide calls this roof a chock stone, but when you are directly below it, it feels more like a roof that is part of the wall. A photo from a distance away from the route makes it look more like a chock stone, albeit a giant one. This whole pitch protects well at the cruxes with a single large rack. C4 #.75-#1 make for a good gear belay on the ledge.

2nd Pitch- 120’- 5.10b/ Handren’s guide calls this 185’ but it is not even close to being that long. The crux of the route is off the deck on this pitch. Traverse back left and up on face moves to sling a suspect arch. Yard on this arch back right until you can stick a hand jam in the overhanging roof.  Get a solid hand sized cam there and jam your way up large hands/small fists in the dirty corner until you can get your feet under you. Trust in the rock on these crux moves is at a premium and detracts from the route no question. As soon as you pull the roof, there is a passive gear rap (tri-cam/nut) station (2014). Continue up the sustained (but at a lessor grade) wide corner placing 3’s, 4’s and one 6. I had no use for C4#5’s and could do the whole route without them. You reach a flat ledge with another passive rap anchor (hex/nut 2014).

A single 70m rope (and prob a 60m as well) make it down the first rap to the station above the roof. Then a double rope rap to the ground.   Both are passive gear rap stations. We replaced some of the cord in 2014. Have extra passive gear and cord with you. You should be able to use a single on the first rap and avoid worrying about the knot over the lip of the edge. On the 2nd rap, I recommend stopping on the ledge below the large roof and pulling your knot down below same.