OSM map centered on the Schöllijoch, between Inners Barrhorn and Schöllihorn. The Topalihütte lies at the trail junction a few kilometers to the NE.The Turtmannhütte is just SE of the pair of lakes in the upper left. On a direct line, the distance between the two huts is quite short. But the switchbacks, the elevation difference and the rough terrain all take time, and with a couple of detours thrown in it took all day.Click here for a larger map. 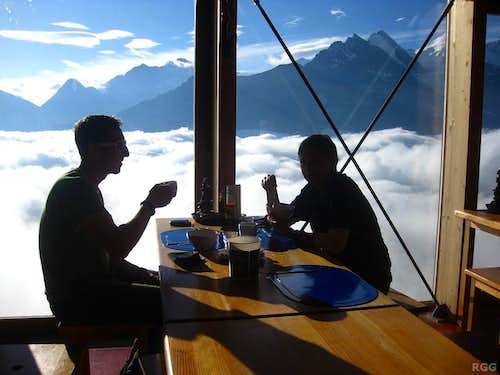 Breakfast above the clouds, in the Topalihütte
In the summer of 2012, I traveled to Switzerland to explore the glaciers and mountains south of Zermatt and climb a handful of 4000-ers. I arrived a few days earlier than my climbing companions. As I asked around for something suitable to do by myself, I learned about Üssers Barrhorn (3610m), the highest "hiking" peak in the Alps. The easiest way up is from the west, from the Turtmannhütte via the Schöllijoch (3343m) and north from there. But when it's feasible, I like to take different routes up and down. And there is an alternative way up to the Schöllijoch, from the east, from the Topalihütte, only slightly harder. 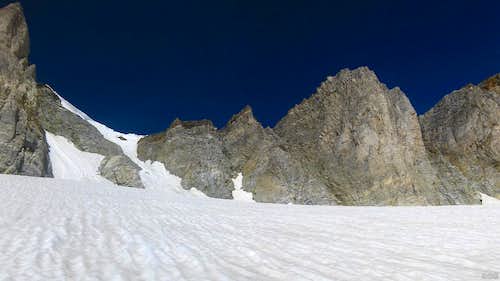 The Schöllijoch from the east. The route goes up the rock buttress immediately to the right of the wide snow filled couloir.
The section that makes the latter route slightly harder is right below the Schöllijoch, which is quite steep: it climbs the rocks directly to the right of the big snowy couloir. It's definitely exposed, but the actual climb looks harder than it is, and has ladders and steel cables securing the route. When I looked it up later, I learned that the route from the west, from the Turtmannhütte to the Schöllijoch is UIAA grade F, and the one from the east, from the Topalihütte, is F+.

I started from the east, hiking up to the Topalihütte along the steep trail from Schwiedernen. The old hut burned down a while ago, but it's replaced by a new, modern one, and a very comfortable one at that. The next day I made good time on my way up, and so, after Üssers Barrhorn, I decided on two more detours, to Inners Barrhorn and Schöllihorn, before descending to the Turtmannhütte.