I overlooked Uncompahgre Plateau for the first few years of my living in western Colorado, but then without realizing it I started to venture into this wonderful land, and fell in love with it. It offers many opportunities for hiking, mountain biking, cross country skiing and snow shoeing in the winter; rock climbing with well known destinations as Unaweep Canyon, Escalante, Dry Creek and crags by Naturita. It does deserve our attention.

Colorado is known for its mountains - Rocky Mountains occupy roughly the middle one third of the state. East of the mountains lies an expanse of fertile lands - prairies, and west of the main mountain chain is a vast area of plateaus, under the general designation of Colorado Plateau. Uncompahgre Plateau is a part of this Colorado Plateau. It features some minor humps along the crest, none of which would be of particular interest to the mountaineer. However, it is for the side canyons that one would visit this place. One can view Uncompaghre Plateau when driving on Hwy 550 from Grand Junction south towards Ridgway/Ouray/Telluride area - it does not look very impressive from the highway, but beautiful hidden spots await you if you decide to visit.

Located in Southwest Colorado, the Uncompahgre Plateau is area bounded by Highway 62 on the south, the Gunnison and Uncompahgre Rivers on the east, Colorado River on the north, and San Miguel and Dolores Rivers on the west. The plateau is surrounded by paradoxes. South of the Plateau are the rugged San Juan Mountains, rich with history of gold and silver mining. Dolores river on the west side flows perpendicular to its valley = Paradox Valley, and the Unaweep Canyon drains in two directions (Unaweep Divide). Gunnison River has cut one of the greatest gashes on earth when much easier course was a short distance away.

Uncopahgre is a Ute Indian word that describes the water: “Dirty Water” or “Rocks that make Water Red”.

The Uncompahgre Plateau sweeps about 100 miles across Western Colorado, and encompasses 2,290 square miles (=5,900 km2). Approximately 75% of the land is public. The USFS manages 37%, BLM manages 37%, and  the State of Colorado manages 1%. Federal land administration on the Plateau is shared among three USFS Ranger Districts and two BLM offices. Private land accounts for 25%, and is located primarily near the Uncompahgre Valley. The Uncompahgre Plateau is divided among five counties - Delta, Mesa, Montrose, Ouray, and San Miguel.

Historically there was a lot of mining activity in the northwestern portion of the Plateau. Names like Uravan, Nucla give you an idea that uranium and vanadium was found here. 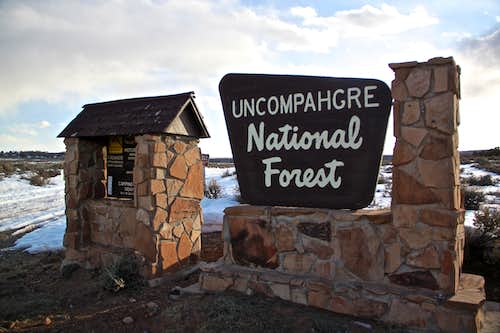 Start of Divide Road - Unaweep side. Uncompahgre Plateau is a part of Uncompahgre National Forest. 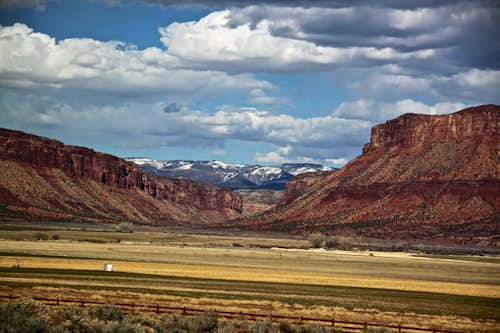 Paradox Valley and Uncompahgre Plateau in the distance
The Uncompahgre Plateau is one of the major geologic uplift formations in the region.
The Plateau rises from 4,600 feet (1,400 m) at Gateway to over 10,300 feet (3,100 m) at the top of Horsefly Peak. The summit is relatively flat with an average elevation of 9,500 feet (2,900 m) that runs southeast to northwest. The summit drops off quickly on the west side and more gradually slopes downward on the east side.
The Plateau is incised by many deep canyons separated by relatively flat mesas that generally run perpendicular to the summit. Large canyons such as Big Red, Tabeguache, Spring Creek, Roubideau, Escalante, Big Dominguez, and Unaweep expose numerous geologic layers of Precambrian Granite, Morrison and Dakota Sandstones, and Mancos shale.

The Divide Road is the primary road on the Plateau running northwest and southeast from one end of the Plateau to the other. Major roads connecting with the Divide Road include Dave Wood Road, Highway 90, the Transfer Road, and 25 Mesa Road. One can access the Divide Road from several approaches; the Delta-Nucla Road (FSR 503), or via Montrose on FSR-9 (old Hwy 90). The classic auto tour of Uncompahgre Plateau is the full length of the range from Sanborn Park Road off Hwy 141 4 miles east of Norwood, to the road end at Unaweep Canyon on Hwy 141 10 miles southwest of Whitewater on US-50. 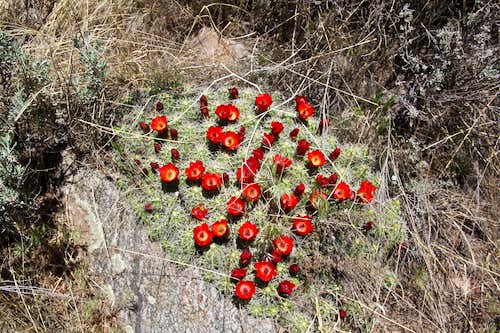 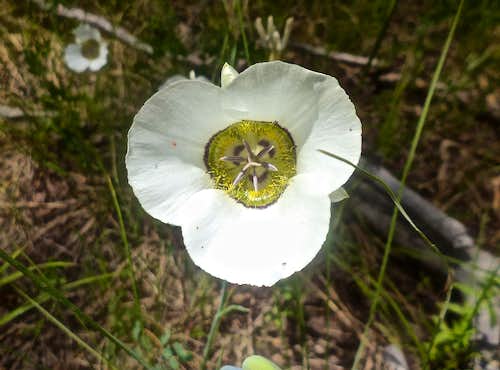 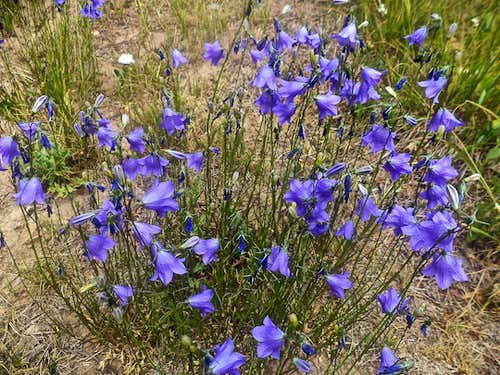 Campanula rapunculoides
The Uncompahgre Plateau supports a wide variety of plants. Annual precipitation varies from less than 10 inches at the lowest elevations to more than 30 at the higher elevations. Snowfall accounts for the majority of the precipitation.

Below 6,000 feet near the Dolores, San Miguel, Uncompahgre and Gunnison Rivers, a salt-tolerant, desert plant community is the predominant vegatation. Species include: four-wing saltbrush, shadscale saltbush, black sagebrush, winterfat, rabbit-brush, cacti, snakeweed, greasewood. In the Uncompahgre Valley and the area around Nucla land was cleared and aggriculture dominates. 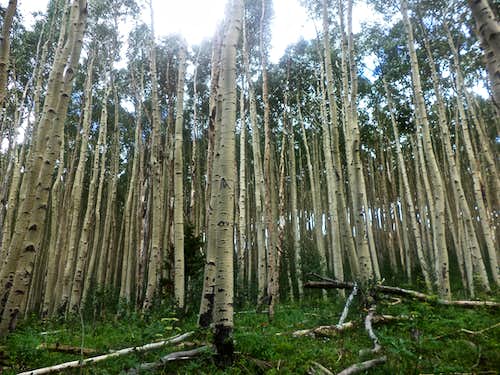 Between 6,000 to 7,500, pinon pine and juniper are predominant. Pinon-juniper forest cover approximately 40% of the Uncompahgre Plateau. Other species are sagebrush, cacti, saltbushes, western wheatgrass, Indian ricegrass, and a variety of forbs.

Above 7,500 feet, oak and ponderosa pine become more prevalent. You can also see mountain mahogany, mountain big sagebrush, snowberry, and bluegrass. On the northwest side of the Plateau, manzanita is also common shrub.

Above 8,000 feet, the mountain shrub/Gambel oak and pine/oak communities transition into aspen and spruce/fir forests and open meadows.

The only federally listed threatened and endangered plant known to occur n the Plateau is the Unita Basin hookless cactus (Sclerocactus glaucus). The Uinta Basin hookless cactus is found on Salt-Desert/Grassland sites west and northwest of Delta in the vicinity of Cactus Park, lower Roubideau, lower Escalante, and McCarty Bench. 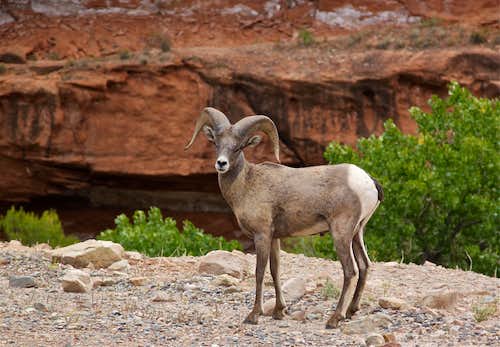 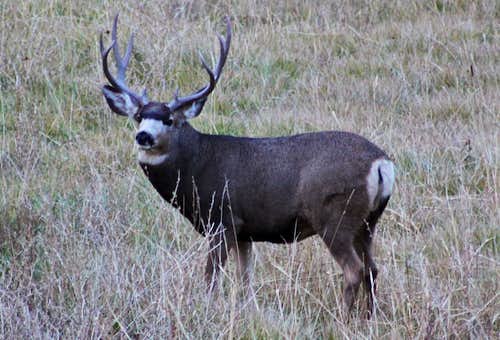 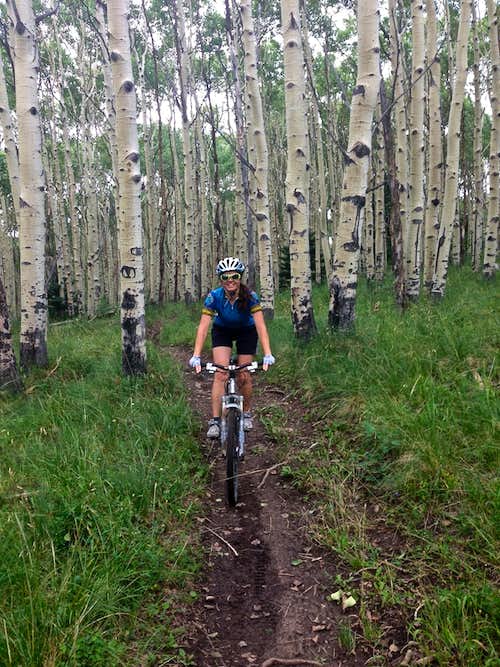 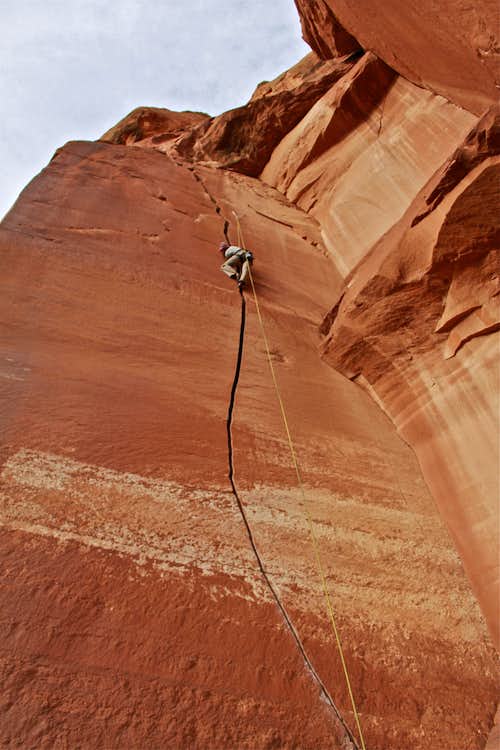 As mentioned above, most summits are gentle points along the plateau and not that interesting from mountaineering perspective. I will mention some summits, which I think deserve an attention either for scenery, views, scramble etc. Some summits can be reach on mountain bike. 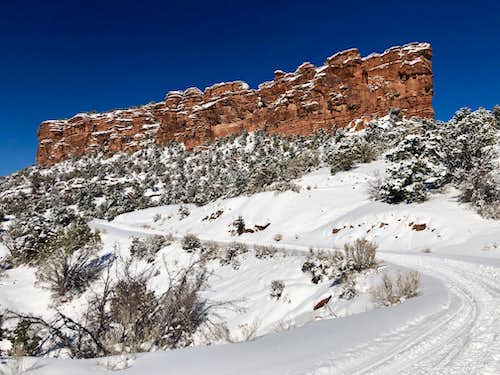 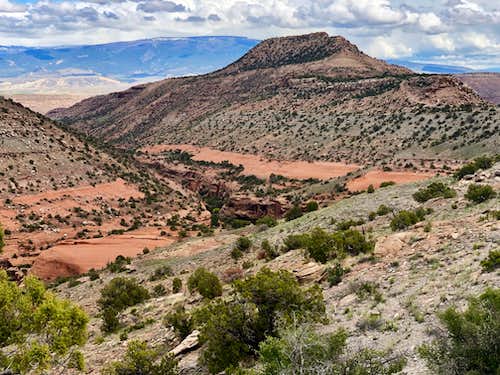 Triangle Mesa
For peak baggers - List of John is an excellent source of all ranked and unranked peaks, some have trip reports. I chose not to describe my route up Horsefly since it is on private land and I trespassed in January from Dave Wood Road. The private cabin area was completely covered with snow including the gates. It was about 10 miles on snowshoes, breaking the trail in deep snow. The views of Sneffels are excellent from the summit of Horsefly Peak.
Most other peaks are too easy and short to create a page. I will be adding more peaks to the table as I get to summit those. 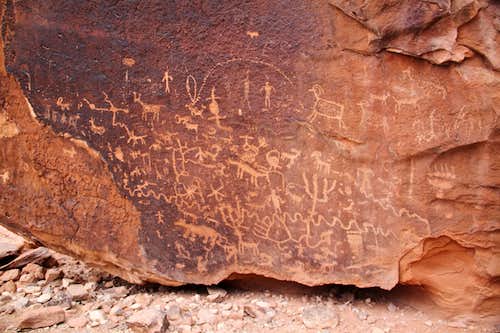 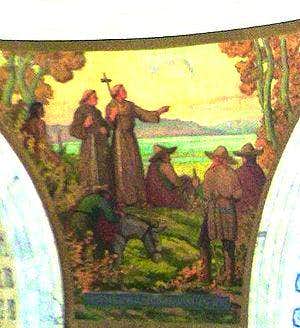 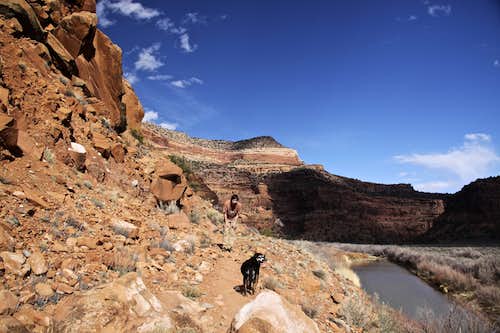 Dolores River
The history of Uncompahgre Plateau can be told by the many Indian trails up the canyons and over the range, many of which still exist today as recreation trails and stock drives; and by the presence of the open range and cow camps that developed when the land was finally wrested from the Utes, their last concession of a once huge domain in western Colorado.
Most roads crossing the plateau were laid out along Indian trails, since these people had thousands of years in which to discover the easiest routes. Many had been heavily trafficked and most likely resembled narrow roadways, especially after the Indian got the horse and began hauling his possessions, including the heavy leather of his teepee, tied to dragging poles. From centuries of use these trails became almost indelible in the soil. Marshall in his guidebook to Uncompahgre Plateau mentions that the place where the Uncompahgre to Elk Mountains trail crossed fields near the town of Delta was clearly marked in stunted corn even after seventy years of plowing. Petroglyph Indian writing is frequent on cliff faces and on free standing rocks of significant size, shape, or situation. There are no cliff dwellings. Dakota sandstone and other formations on the Uncompahgre Plateau do not produce the deep caves found in Mesa Verde country, but many rock overhangs blackened with prehistoric smoke indicate that the tribes took advantage of whatever shelter was available. 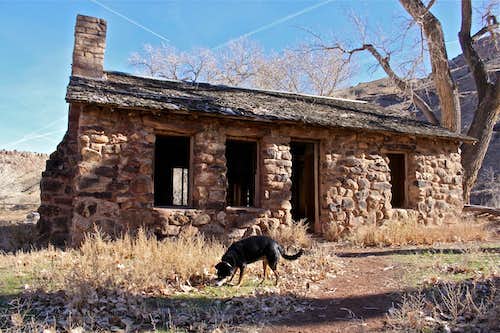 Walker cabin in Escalante Canyon
It was probably by following one of these trails that the first white explorer set foot on the plateau. Not much is known about him except that he was a Spaniard looking for gold (year 1761). This unknown explorer was followed in four years by Don Juan Maria de Rivera and party under orders from the governor of New Mexico. Starting from the east, he circled into the drainages of the Uncompahgre and Gunnison rivers, bypassing the formidable barriers of the Elk Mountains and the San Juans. In doing so he bypassed all the gold. After crossing the plateau and passing down the Uncompahgre Valley, Rivera made his farthest north camp at the shallow ford where the Uncompahgre and Gunnison rivers meet, close to present site of Delta.
Ten years after Rivera, more Spaniards were camping at the same ford. This party did not search only for gold, but was also interested in agriculture. One year later Fathers Dominguez and Escalante set out from Santa Fe with a very large party, to search for a northern route to California that would pass through friendlier tribes that those who made the southern route frequently fatal. The fathers were also looking for suitable places to found Indian farming settlements and missions (year 1776). By that time the Uncompahgre was pretty well known to the Spanish; there was no reason to get lost, but they did. For one thing, in their great swing around the west end of the San Juans they hadn't seen a single Indian to ask directions of. They were lost down in the bottom of Dolores canyon, exhaustedly fighting their way through its brush and forced to cross the stream every three hundred yards or so. Dolores, a Spanish word for pain and grief, understates their predicament. Eventually, they found a trail and made their way to the Uncompahgre Valley. Incidentally, thought two of the enormous clefts that pierce the Uncompahgre Plateau were named for the two Spanish priests - Dominguez and Escalante canyons - neither of the men ever set foot in the beautiful canyons that many years later would be named for them.

There is no fee to explore Uncompahgre Plateau.
Camping: I am not aware of any payed campground on Uncompahgre Plateau. There are many sites for primitive camping offering solitude, especially along Divide Road and its many side roads.
USDA (United States Department of Agriculture) has only two campgrounds listed on their website, and both are free of charge.
Columbine Campground: no water, no fees, no reservations (First Come, First Serve camping), vault toilet.
Iron Springs Campground: no services, no reservations, no fees, vault toilet.