Located at the northeastern edge of the Colorado Plateu, the Escalante Canyon is one of the most pristine climbing areas in all of canyonlands.
The canyon was formed over 600 million years as Escalante Creek carved the 1,300 foot gorge. The Escalante Canyon has a long history of human occupation. The Ute Indians for years had made the North Fork of the Escalante River their winter home. Early settlers, attracted by the year-long water supply and sheltering cliffs, son pushed the Indians off the land.

Many cattle outfits began using the canyon as their winter quarters. In 1886, John Musser took up residence in one of the first homesteads in the canyon where he operated the Musser Cattle Company. Over the years the company has acquired ranch after ranch so that now most of the grazing paddocks along the canyon's entire length are consolidated under Musser Cattle.

The infamous Colorado Sheep War centered around cattlemen protecting their grazing land from flocks of hungry sheep. In the early 1900s, an unwritten code existed which relegated sheep to one side of the Gunnison River. When a swinging bridge was built over the river and sheep travelled across, the cattlemen retaliated by shooting hundreds of sheep. Two residents of the canyon died in the shootout.

Most people lived very peaceably with one another. Henry Walker, and his large family built brick cabin, which still stands there. Built in 1911, the family was unable to afford cement for the mortar between the bricks, so Henry and his four sons laid the bricks using mud dug from a hole in the yard. The cement that exists on the cabin today is a thin coating, applied later after the family earned enough money to buy the materials. The Colorado Division of Wildlife owns the historic building today and visitors are welcome to explore the cabin.

Another resident, Captain Henry A. Smith, was particularly sociable. When Smith was 65, the small but spunky man packed up and left his lifelong home of Joliet, Indiana to serve in the Civil War. Though he only served a month in the war as acting captain, he became "Captain" for life. To accommodate all his visitors, Cap build two houses - one for his guests. The house is now state owned, but remains open to visitors. The Colorado Division of Wildlife maintains the site and has added a picnic table.
Dominguez-Escalante National Conservation Area 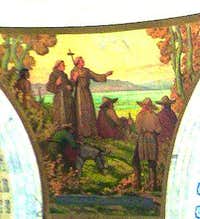 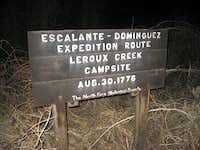 In 1776 the Spanish mission explorers, Fray Francisco Dominguez and Fray Silvestre Velez de Escalante, led an expedition through western Colorado. Their purpose was to find a practical route between Santa Fe and the new missions in California, to convert Utes and Havasupais and to establish a chain of mission stations between Santa Fe and Monterey. Neither objective was realized, but they explored more unknown territory than Lewis and Clark. The Escalante expedition did not actually traverse this section of the Gunnison river, having circled to the east of Grand Mesa. In 1875, however geologists with the Hayden survey named the creek Rio Escalante and down the stream Rio Dominguez in honor of these pioneering Spanish Padres.

The two Franciscan Friars, the most famous Spanish explorers of western North America, were the first non-Indians to visit the Colorado Plateau. Where they passed they left a rich heritage of Spanish place names. The explorers passed close to Cortez, Colorado, circled east of Grand Mesa, then crossed the Colorado River at Moab and the Green River at Green River, Utah. They continued north to the area of Vernal, Utah, and northwest to Provo and the Salt Lake territory, where they turned southwest to the area of St. George.
Dominguez and Escalante noted in detail the land they traversed.

Escalante Canyon is reached from U.S. Highway 50 between Grand Junction and Delta. About 15 miles northwest of Delta is a signed turnoff to the west. Turn west, passing a sign describing the Escalante-Dominguez expedition. Follow the dirt road down a draw and reach a bridge over the Gunnison River after 2.7 miles. Follow the road up the canyon for 7.9 miles to the Smith Cabin historic site. The Cabin Wall climbing area is above here. The Potholes, a good but dangerous swimming hole, is another 1.1 miles upcanyon on the left.

Images along the road in Escalante Canyon

Climbing at Escalante is similar to climbing at Indian Creek in Utah. Expect steep, sustained crack climbing on Wingate sandstone.
The routes range from 30 feet (9 meters) to 180 feet (55 meters) in height. Nearly all routes are within a few minutes hike from the car. Some routes climb to the top of the cliff, but most have anchors set up. Eric Bjornstad writes in his Desert Rock book "Please leave no trash (including tape) and use rappel slings, bolts or fixed pieces very sparingly. It is traditional that all routes be free climbed and that chalk is not used in Escalante Canyon. If you feel compelled to use this aid, please match its color to that of the rock."

Climbing guides: Desert Rock: A climber's Guide to the Canyon Country of the American Southwest Desert by Eric Bjornstad. This book is out of print, and hard to get. As you can see the listing price on-line is from 115$ up (I am fortunate to have one).
Falcon Guide:Rock Climbing Colorado has good route descriptions, and the new edition has excellent images.

This area has a great potential for more development. And there are more new routes added further inside the canyon. The best way is to ask locals. Most of the new routes are not described in any of the guide books. You can climb there pretty much year round - I climbed there over Thanksgiving and Christmas Day.

About Eric Bjornstad book - great route descriptions, but some information is out-dated, e.g. originally the route ended up on the top of the cliff, but anchors were placed since then. I liked that he mentions first ascents for most of the routes, and its length. Eric Bjornstad also uses a nice language, e.g. paraphernalia = equipment.
But, Falcon guide to Rock Climbing in Colorado is very sufficient, and the second edition provides excellent photographed route descriptions. So, don't spend over 100 $ on the original guide. 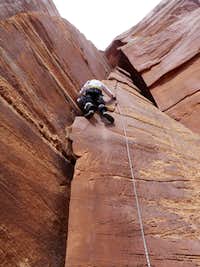 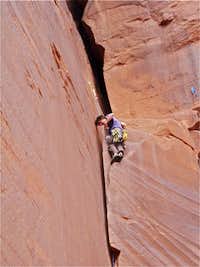 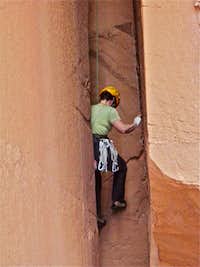 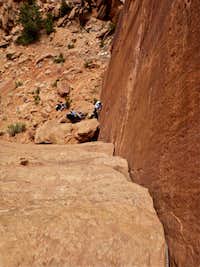 I placed photos only of climbs I attempted - some successfully and some not. I am not really 5.11 climber, especially when it comes to cracks. I find desert crack climbing a lot more challenging compared to face routes on granite.

Most of the routes in Escalante are 5.10-5.11 range, but as you can see there are some easier routes too.

Below I will be posting images (planing to add more in the near future) of my animal encounters in the canyon:

You can obviously hike along the cliffs, and check on climbing routes, or explore interesting rock formations. There is a designed trail near the start of the canyon. It is about 2.1 miles west from the US 550. I could not find any description for this trail in my hiking/climbing books, and other than a sign McCarty Trail there was no other information at the start. There is a small parking lot on the north side of the road.

Below are some images from hiking Mc Carty trail:

McCarty Trail On-Line This link shows location on the map and some information about the trail and its vinicity.

History behind McCarty Trail: the trail is linked with the infamous 1893 Delta bank robbery in which two of the three bandits were shot dead making their escape. The trail is thought to have been the thieves' planned route for eventual getaway.

Escalante River flows into Gunnison, and later on into Colorado River. The river has many potholes, which are popular swimming destination in the summer. You can find small ones - great for kids, and big ones with slides and cliff jumps. Potholes are also dangerous due to changing currents, and several death have occurred there (most likely due to some alcohol use too).

Potholes are located past the climbing areas, continue on the dirt road to a developed parking lot with toilets and informative signs. You will park just above the river, and there is a short trail (? 50 meters) down to the river.

Escalante Creek flows into Gunison River, and later on into Colorado River. The Creek flows year round, and during the spring it could a good paddler's destination. The season for running Escalante Creek is extremely short. Most years it will run for a week, maybe too. It is fed by snowpack on the Uncompahgre Plateau, which in a hot and dray part of the state. The run-off goes quickly, and starts about the second half of April.

The creek is a typical desert stream in that it is very muddy. There are a lot of shallow rocks hidden in this silty water so you have to carefully read the surface of the water to avoid pitoning or being deflected of your line. 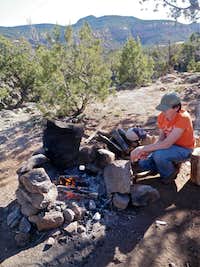 11 miles up the road from Hwy 50 is Captain Smith's Cabin, a well marked funky stone cabin on the right side with a covered picnic table. 1/2 a mile further up, you enter public land, and there is a parking lot on the left. Many climbers park there, since the Interiors Wall climbing area is just there. There are unofficial campsites with campfires in that area. See photo on the left.

If you continue further up the road, you will encounter many more pull offs to the left, and the scenery for camping just gets better, and trees get taller. Most campsites sit high up above the Escalante Creek, so safe from floods. One area has even dry pit toilets.