Take I-70 west to the Vail Pass recreational area and park in the day use area south of I-70.

Run 1:
Luke and I crossed I-70 to the north side and skinned northeast until we were adjacent to Corral Creek. We continued north along Corral Creek for ~0.3 miles, crossed it and started heading up a drainage that led us into a huge bowl. We gained the ridge (~12,160') at the top of the bowl and dropped in the other (northwest) side of the ridge and skied down into the trees (~11,480'). The snow at top had a firm crust, but was covered by a nice layer of surface hoar. The snow down lower was deep pow.
Elevation: ~680'

Run 2:
We skinned up northeasterly to the saddle between Elevation Point 12,089' and Uneva Peak (12,522') and continued on Uneva's west ridge to its summit. We skied down the west ridge and dropped into a steep, south-facing chute, then continued down to the end of our first run. We were surprised with our ability to ski from the summit. The snow near the summit was patchy and firm, but suprisingly had many pockets of windblown pow. The snow at the top of the chute was dry powder, but the bottom of the chute had a thin sun crust which made us hold on for dear life as we came ripping down!
Elevation: ~1,042'

Run 3:
We skinned back up to Uneva's west ridge and dropped into a steep, north-facing chute and continued deep into the trees. This was the best run of the day. The snow was dry and fluffy just below the ridge, in the chute and into the trees. In addition, the tree skiing was great; there were many features making it an interesting, gladed run.
Elevation: ~1,320

Run 4:
We skinned back up to Uneva's west ridge and skied another south-facing chute further west of the first one we skied (Run 2). The sun crust we found on Run 2 was now softened by the intense sun.
Elevation: ~480'

Run 5:
We skinned southeasterly to just below the ridge that we fist skied from (Run 1) and skied a steeper line east of our first run. The snow at top was thin and firm, but lower was deep and dry!
Elevation: ~380'

Run 6:
We skinned back up to the ridge and skied the huge bowl we were drooling over many hours earlier. The snow at top was firm, but soon got soft with an intermittent sun crust. Once we got to tree line, the snow was consistently soft. Just above Corral Creek, the snow was skied out and slick from melting and freezing making for a quick descent.
Elevation: ~1,560'
Total Elevation: ~5,462' 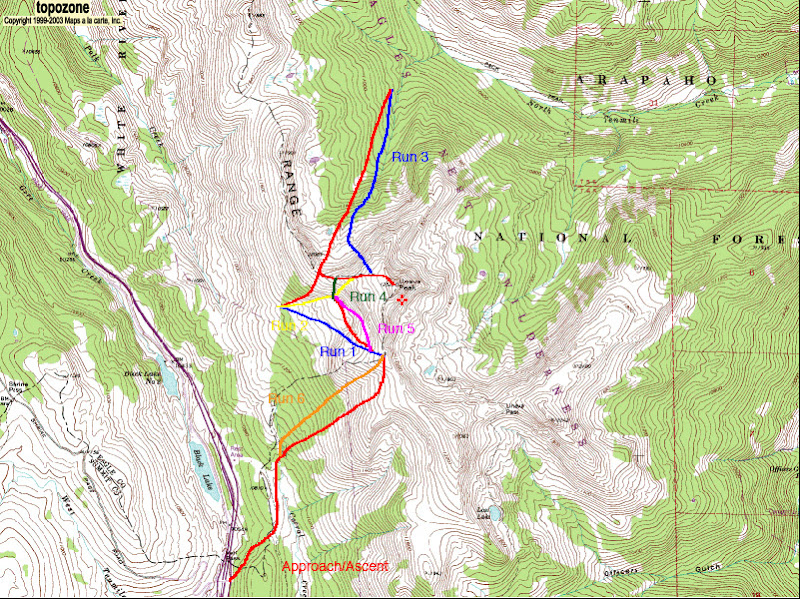