Up and around Hohes Rad

Up and around Hohes Rad 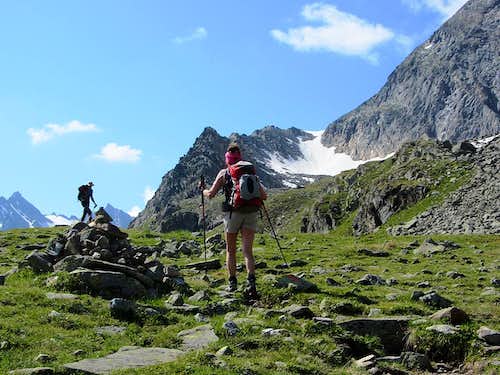 We are on our way to Hohes Rad, the mountain on the left. The trail first goes to the Radschulter, the saddle atop the snow slope ahead.
On a hot summer day, we wanted to hike up from the Madlenerhaus (2986m) to the summit of Hohes Rad (2934m), and then make our way back to where we came from via the Radsattle, the saddle south of the mountain.

We knew that thunderstorms later in the afternoon would be a distinct possibility. The day before it had started drizzling shortly before 4, but it was very light, not even enough to put on wet gear. However, today we were in for a surprise.

OSM map of Hohes Rad, with all the hiking trails in the area.
The Madlenerhaus is just west of Bielerhöhe. The Bieltal is the valley east of Hohes Rad, the Ochsental the valley on the southwest. The big lake is the Silvretta Stausee.

Coming from Bielerhöhe, the normal route first goes south, traversing the eastern slopes and ascending up to the Radschulter (2690m). That's a prominent shoulder on the east side of the mountain. It's a well maintained but strenous hiking trail, and the steep northern slope to the shoulder was still covered with a lot of old snow. The top layer was soft though, so we didn't need crampons.

By the time we reached the shoulder, the clouds started to move in. We dropped our packs and started up the final steep part, which is a mix of hiking and a few scrambling sections.

Around one o'clock the skies got a bit darker, and we felt a few drops. It stopped as soon as it started, but two of our party of four took that as a sign, and decided to turn back. Wilco and I continued, convinced it wouldn't be dangerous this early, and besides, it wasn't much more than 100m up to the summit. We picked up the pace, and quickly made it to the summit. To the north, the sky looked fine, but to the south it was darker. But it was still dry, and didn't look like that would change soon. 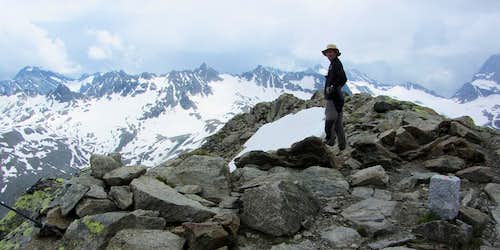 Panorama from Hohes Rad to the southeast

Half an hour later we were back on the shoulder. The shortest and fastest way back would be the way we came from, but that would make it a rather short day. We wanted a bit more. And so we continued south, traversing more of the eastern slopes. Our next goal was the Radsattel, a high saddle on the south ridge of Hohes Rad, where there is a trail descending to the northeast, into the Bieltal valley, and another one to the southwest, into the Ochsental valley.

But we had hardly left the Radschulter, when the first drops came down. It wasn't even two o'clock yet. It wasn't much at first, but only a few minutes later it started hailing, and we put on full wet gear. And then, within minutes, it turned into a deluge.

We hiked on, and both got soaked, despite our wet gear. That is, Wilco found that his pants were fine, but his rain jacket didn't keep him dry at all. And for me, well, my jacket stopped at least most of the rain, but my rain pants did a very poor job.

As we came to the Radsattel, we still didn't see our friends. We didn't think they could be all that far away, but visibility wasn't exactly perfect. Now, as we had discussed today's itinerary, we knew we had two options from the saddle. But when Wilco and I got there, we weren't quite sure where our friends had gone. Being in the pouring rain on the exposed saddle was not exactly a good spot to talk long about it, and so we quickly decided to go over the saddle and down to the Ochsental, because that would lead us all around Hohes Rad. Had we looked at the map, we would have seen that it was decidedly longer than the Bieltal route...

In the torrential rain we descended. At first, the trail was very steep, and very wet too, as the water often followed the same trail as we did. But soon enough the steepness gave way to more gentle terrain - albeit that it was now wet everywhere. 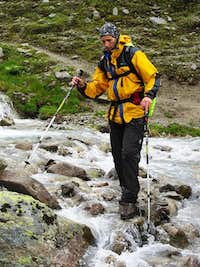 Wilco crossing a stream after an hour of rain
In the end, the rain continued for a little more than an hour. Fortunately, there had been no lightning, no thunder, and since it wasn't cold either, there was no danger of hypothermia either. But we were still glad to be out of the rain. As quickly as the bad weather had descended upon us, it now gave way to the sun again. And thanks to its strong rays, we were drying quickly. 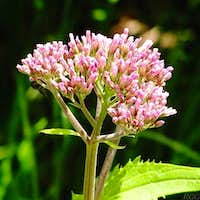 The local flora brightened up, thanks to the rain
As we finally got back to the Madlenerhaus, our friends were already there, enjoying the sunshine, the views and a beverage on the outside terrace. They had gone down the Bieltal valley... 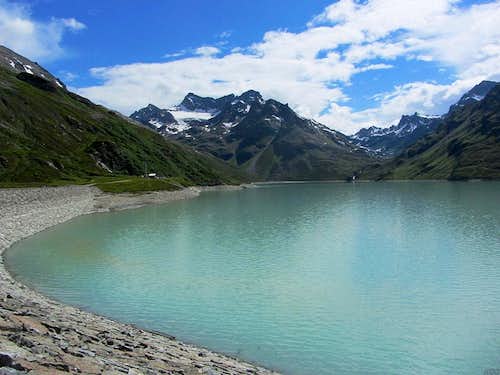 The calm Silvretta Stausee after the rain, with the western slopes of Hohes Rad on the left

View Up and around Hohes Rad Image Gallery - 45 Images