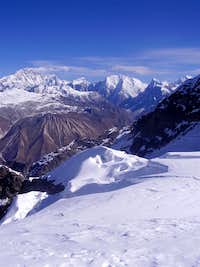 This mushroom-shaped mountain situated in the Langtang region of Nepal offers a perfect alternative to Island Peak in the Khumbu region. It is surrounded by majestic peaks such as Langtang II, Langtang Lirung, Dorje Lapka and Shisapangma in Tibet. The difficulty of the climb is very similar to Island Peak (PD+) and even though it is not surrounded by the massive 8,000m-ers, the views from the summit are spectacular. On the way from Langtang to Kyangjin, you will see a perfectly shaped snowy peak, which is situated slightly south of Naya Kanga (5,844m). seen from the southwest, Urkema peak almost looks like Ama Dablam, which is situated in the Everest region. However, from the southeast – the side we approached the 5,800m peak – the summit appears like a snowy cone, with a perfect ridge to be climbed on its southeast side. Route description to Urkema Peak High Camp – about 7 hours from Kyanjing ascent 1,270 metres 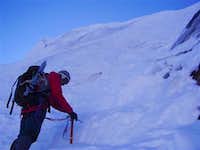 Leave Kyangjin towards Langtang village. After about 200 metres (Latitude: 28’1245.6/Longitude: 85’3406.4) the path splits. Take the left path that leads past a big boulder, which the Nepal Mountaineering Association equipped with five rock climbing routes in 2001. Follow the stream meandering through the meadows to your left until you get to a metal bridge. Cross the bridge and turn right following another little stream. You will see a few abandoned stone houses to your right. Cross the stream and head towards an ancient forest and make your way through beautiful rhododendrons and fir trees, following a small yak trail. 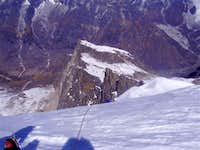 Follow the trail on mixed ground until you get to a small wooden bridge. After the bridge, the path contours around the hillside. Ascend through a thick rhododendron forest up to a ridge, where you will find six nomad houses (Latitude: 28’1207.2/Longitude: 85’3246.7). On the Schneider map these houses are marked as Pangame Long at 3,940 metres. Just above the houses, the yak trail continues to the east leading through the rhododendrons. Cross another little stream and head towards the ridge to the left of the slope. There are several yak trails, but you might end up cutting through the shrubs. Continue up the ridge through dense shrubbery until you get to two big cairns at 4,135 metres (Latitude: 28’1125.4/Longitude: 85’3249.2). 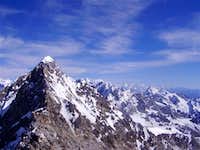 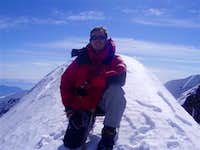 From here, you will get the first good glimpse of the beautiful mushroom-shaped snowy peak peeping up behind a rocky ridge. Ascend the steep, snowy ridge on your right side, which will require cutting steps. Once on top, you will get to an open space, which is a perfect spot to set up high camp at about 4,900 metres (Latitude: 28’1045.7/Longitude: 25’3228.3). To the north, you have a magnificent view of Langtang Lirung, Langshisa Ri and Xixapangma in Tibet. To the south, the impressive south face of Naya Kanga (5,844 metres) is towering above you. The Climb ( High Camp to summit takes about 7 hours). Ascent about 1,000 meters From high camp, cross the rocky field and climb up about 50 meters until you get to a rocky slab on the right. From there, ascend the snowy 30 degree slop (crampons are recommended) that leads to a glacier, which soon becomes a large glacial bowl. Zigag your way up, always keeping to the right. Aim towards the rock face to the west. From here, the slope gets a little bit steeper – about 40 degrees. A fixed rope is recommended for groups. Stay on the ice and climb around the rocks until you get to the top of the ridge at about 5,500 meteres. From here, traverse east until you reach the southeast ridge of the mountain. Ascend the ridge at about 50 degrees until you get to the top. Descend by the same route.

Urkema peak is located in the Langtang region which is north of Kathmandu. The trail starts in Syabru Besi and go through Lama Hotel, Langtang Village and Kyangjin Gompa. You can take a bus from Kathmandu to Syabru Besi (around 3US$ and 10 hours depending on the road condition).

In order to climb Urkema peak, you need a permit issued by the Mountaineering Association of Nepal (NMA). Contact them or Explore Himalaya (the only Nepali agency running commercial expedition on Urkema) for its cost.

As part of the Scouting 2007 Centenary, the government of Nepal renamed Urkema Peak to Baden-Powell Peak, in honor of British soldier Robert Baden-Powell, founder of the World Scouting movement. The peak's coordinates are 28.166389 85.533611 The easiest route is the North route. There is a typo for the coordinates of the high camp.

Isn't it the North face?

"To the south, the impressive south face of Naya Kanga (5,844 metres) is towering above you."

I just stumbled onto a strange glitch which corrupted the location of numerous pages and listed them all at the same point in southern AZ, USA. Member dmiki has also noted this. Please fix the lat/lon coordinates of this page and I'll be happy to remove my "needs updates" vote. Thanks!

I am a scout. I was just wondering whether a terrain map was available or whether and form of map was provided to the group for a pre-excursion. A map that details the steepness, pathways, hardness of ground and whether. These pieces of information will be important for training before taking on such a mountain. Moreover, Julien had mention in his blog that Urkema peak was a great alternative to Island peak. Is it safe for me to assume that the terrain and challenges faced in island peak is similar to Urkema peak. And if so can I plan my training according to Island peak. If anyone has any useful information regarding Urkema peak. Please contact me from summit post or email me: ianchang929@gmail.com