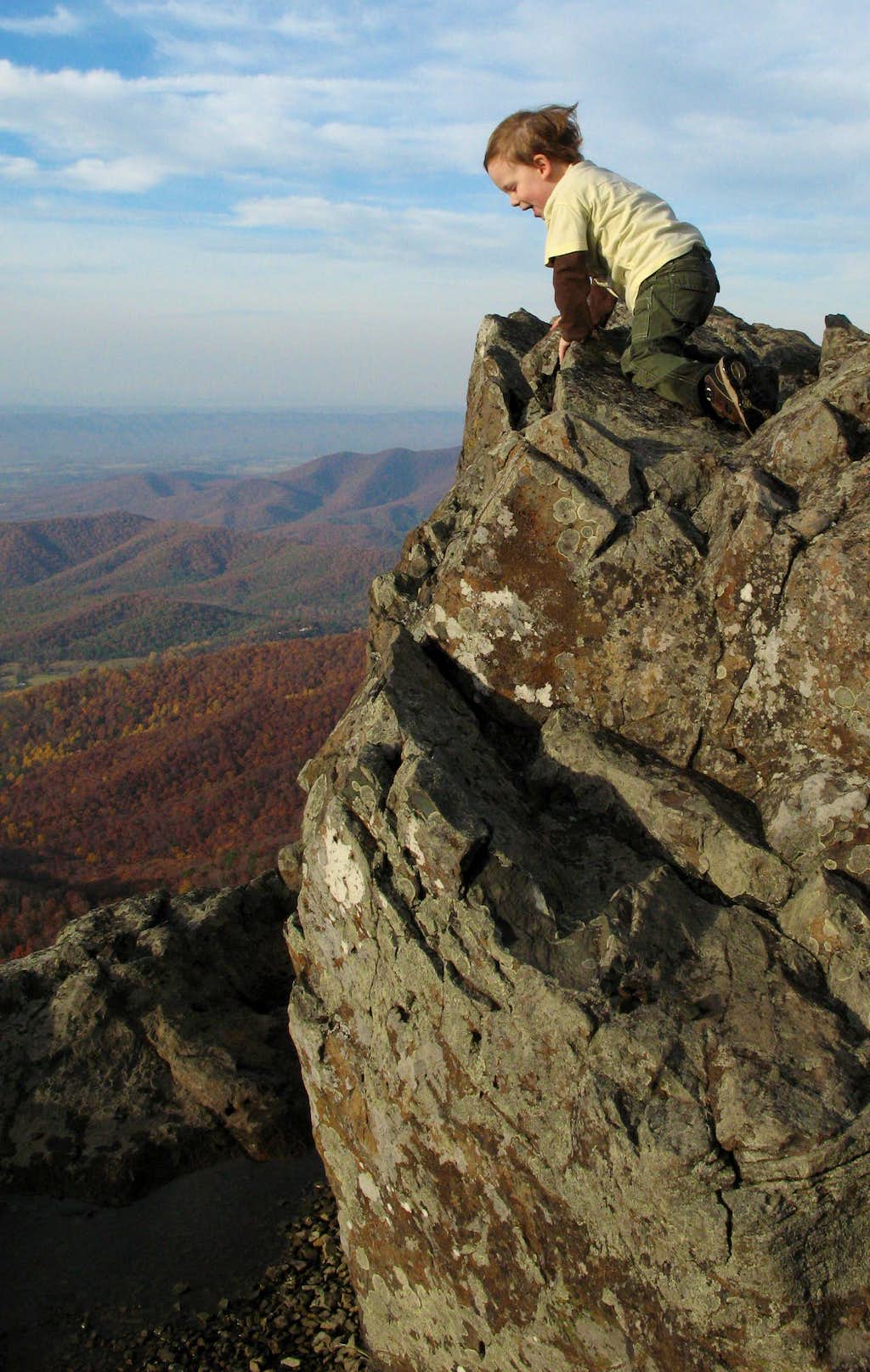 Me atop a Class 3 outcrop (we'll call it 3-year-old Class 4) at Little Stony Man Cliffs in Shenandoah National Park, VA-- Thanksgiving 2007. The grandparents weren't too excited to see this picture and were wondering who was there to spot and catch me if Dad was holding the camera. Well... They say I look just like Dad did at the same age. Poor me...
« PREV NEXT »

What a wonderful way to start a child for outdoor adventures

Save that photo and give it to him in twenty years from now after climbing Denali or Everest. I am taking my 27 year old son up to Canada in 3 weeks for some big Ice climbs in Alberta and British Columbia. May you always enjoy these kind of moments From the ice man Jerry

Re: What a wonderful way to start a child for outdoor adventures

That sounds like a great idea, and it seems you could be a good example to follow in that respect. That's great that you get to do that with your son. Before mine was born, I went on a mountaineering trip and left him a letter telling him something about me in case I never came back, and after I did get back, I made him an album of my favorite and most meaningful hikes and climbs, with the message that I hoped we would do all of them together someday. And the same will go for his sister, who turns 1 in three weeks. She is more daring than he is, actually, which is more like her old man who throws himself into crap first and figures a way through after, so maybe my son will be a good check on us both.

P.S. We actually got Jack started at about six months; we took him hiking in Utah. And then it was Colorado at 11 months and Montana the next summer (where he pretty much filled up each lake he saw with rocks).

He will be a great climber :)
Cheers, Marija

Thank you very much, Marija! You should see his younger sister, though. She is much more daring. I look forward to sharing my favorite mountains with both of them and then seeing them do their own things.

A great picture. Perfect colors, composition, and emotion too!

I really like the expression on his face in this one. He was really enjoying himself and not cooperating with the camera too much, as he kept climbing down and back up again. I have a whole series of him and his sister here from that day. Maybe I should post a kids climbing album and guarantee myself a few 1/10 votes!

Anything planned for, say, late March? My wife and I will probably be going to Death Valley and Zion March 21-28, exact dates depending on available airfares (we have booked lodge rooms, though). She probably won't be doing that Montana trip this summer (that's another story), but I still am!

He climbed up via that ledge beneath him, which put him even closer to the edge. But really, if I'd thought there was any serious risk of a fall, I'd have been spotting him instead of holding the camera. I have another from the next day of him holding on to a small overhang-- the wife hasn't seen that one yet!

No, the kids are not coming out this summer. It's supposed to be a 10-year anniversary trip for me and my wife with a little bonus time for me, but she may not be going now, though I still am.

He looks absolutely thrilled - it's so sweet! :-)

He had a great time that day, and I got several shots of him that are among my favorites.