Shenandoah National Park lacks truly challenging mountaintop routes if one is into scrambling or climbing (yet there’s a ton of bushwhacking if that’s your thing), but it has an abundance of sheer cliffs both right off Skyline Drive and deep in the backcountry. It’s no Yosemite Valley or Zion Canyon, but Little Stony Man is one of the most spectacular crags in the park, and the views from the top and, even more so, from the cliffs themselves, are staggering on a clear day. The cliffs are located a short walk from the parking lot and along one of the park’s most popular trails, but a few minutes into climbing them, you will forget the nearby crowds and become totally focused on the task at hand. You will suddenly be worlds away from that crowded parking area and the busy slice of the Appalachian Trail just above you.

From the large parking area at Hughes River Gap and the Stony Man Overlook on Skyline Drive, the cliffs of Little Stony Man are plainly visible. Rising about 100’ from their base, the cliffs offer challenging technical climbs on wonderfully solid rock with a generally good supply of holds, and only Old Rag Mountain has longer routes and better climbing in the park. Both lead climbing and toproping are popular here, but toproping can be a little tricky (see below for more about this). The cliffs offer numerous routes: gullies, chimneys, cracks, buttresses, and overhangs. Just study them from above and below and then decide what you want to attempt.

Currently, there is no comprehensive published guide to the routes at Little Stony Man. However, the Potomac Appalachian Trail Club (PATC) offers this excellent guide that you can download. It has extensive information on routes, including photos of them, plus information on history, local ethics, red tape, and issues currently affecting climbing in the park.

Note 1: The authors of the above source have broken the cliffs into separate areas and have named them and the routes. Additionally, they and fellow climbers have rated the routes. Each area now has its own mountain/rock page, and those pages are attached to this one. Because SP arranges attached mountain/rock pages in descending order by elevation, I adjusted the elevation for each crag so that they would list as one sees them from left to right.

Note 2: A book by Jeff Watson called Virginia Climbers Guide does exist and lists dozens of routes in Shenandoah National Park, but due to the facts that I have not read the book and that it has received mostly negative user reviews on Amazon, I have not provided a link for it and cannot credibly recommend it as a useful resource.

Some other things to note:

• Although the rock is a very solid, ancient greenstone and offers plentiful holds and opportunities to place protection, it is in places covered with lichens or moss, making it slippery and, consequently, treacherous. Be forewarned.
• The cliffs face west. A warm afternoon makes for beautiful climbing.
• Strong winds often pummel this spot, and they usually come from the west.
• Timber rattlesnakes live in the park. It’s highly unlikely that they’ll be hanging out in such a heavily used area, but you never know.
• The park is open all year, but winter days can be bitterly cold. There could be unseen icy spots as well, especially in the dark, inset gully described briefly in the next section and in more detail on the attached route page.

The reason toproping can be tricky here is that the best natural anchors, the abundant trees nearby, are on the other side of the trail from the clifftops. Instead of letting webbing, rope, and other gear cross the trail (which would be rude to hikers and dangerous to climbers), you will have to sling boulders and utilize rock protection if you are going to toprope here. There is a plan to install fixed anchors for toproping and rappelling, but it is unclear when that will occur (my most recent visit was in November 2015, and there were not yet any anchors installed).

In recent years, the Park Service has stepped up efforts to protect open rock outcrops and the delicate vegetation there from human-caused degradation. This is likely to result in some area closures around Little Stony Man if those closures have not already gone into effect. See Getting There and Red Tape for more details. 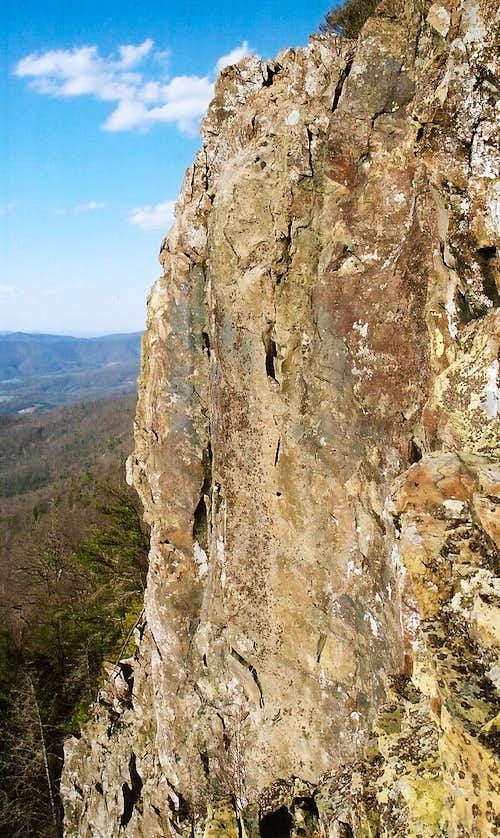 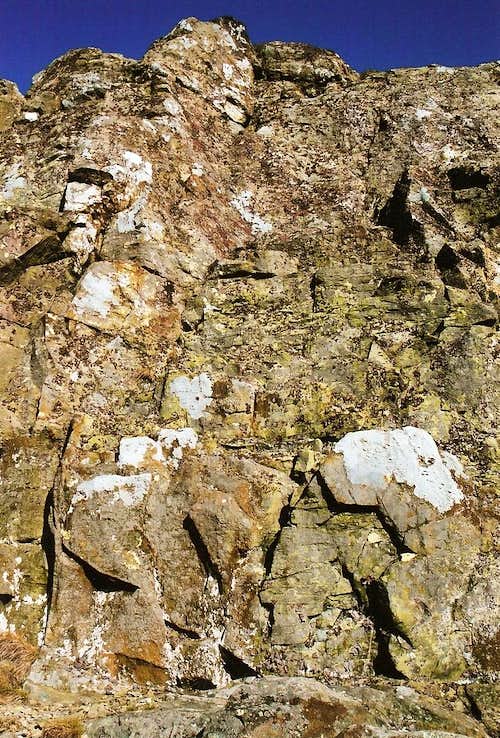 Scrambling abounds
For scramblers and free soloists of more modest ability or ambition, there are still ways up other than hiking. The cliffs are their sheerest and hardest around the middle of the formation, but at both the north and south ends there are ways up that range from Class 3 to easy Class 5. The Class 3 routes are at the south end of the formation (these are in one of the to-be-closed areas, though, so check first for signs or other indications of closures). Other routes there and at the north end, three of which I have successfully climbed, get into low Class 5 with minimal to moderate exposure. One route on the north end is particularly worthwhile; it follows a dark, inset gully (really a chimney) straight to the top. Most of the climbing through it falls into that nebulous world between Class 4 and low Class 5. 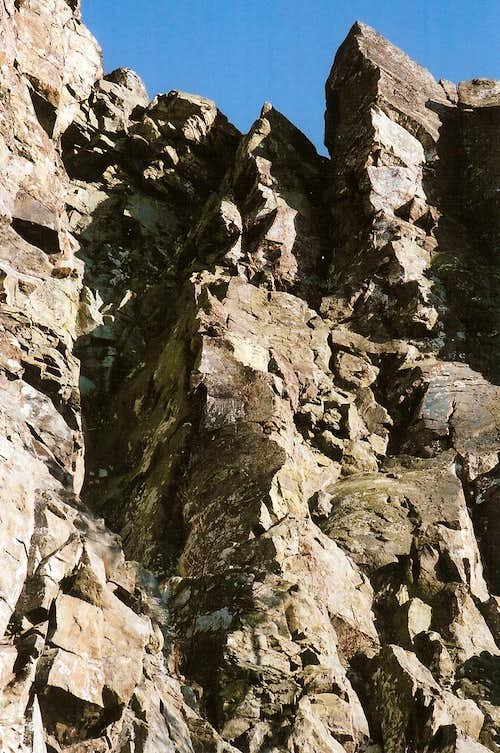 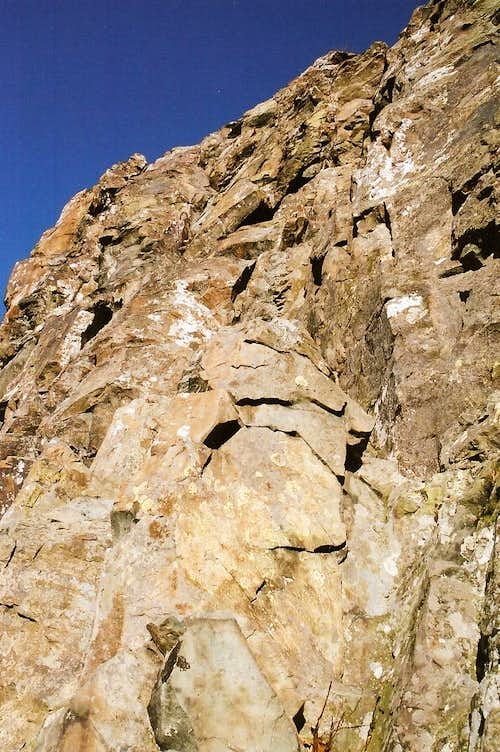 The Little Stony Man parking area is in the park’s Central District at MP 39 on Skyline Drive. If entering the park at the Front Royal or Thornton Gap entrance, drive south. If entering at Rockfish Gap or Swift Run Gap, drive north.

To reach the top of the cliffs, follow the Appalachian Trail south for almost half a mile. At the south end of the cliffs, look for a steep, eroded use trail that accesses the base of the cliffs. This is called the Chute, and there are plans to "harden" it to make it more resistant to erosion.

Do not use the informal routes that can be found at the south end of the cliffs to access the base. If they are not already closed by low-impact barriers, they may be soon.

It costs $20 to enter the park (as of 2016), and that provides access for a week. Annual passes are available. The interagency pass, good for yearlong entry to areas managed by NPS, USDA Forest Service, USFWS, BLM, and the Bureau of Reclamation, costs $80.

There are plans to close a section 35 meters north of the Chute and all of the cliffs south of the Chute to human activity. Also, there are plans to use low-impact barriers to close off a boulder area at the north end where the Passamaquoddy Trail bends to approach the base of the cliffs. I do not know when these closures will go into effect; they did not seem to be in effect as of November 2010, the last time I was out here.

To reduce poaching, Skyline Drive is subject to closures during hunting season. The information below, copied and pasted from the park site, illustrates the 2006 restrictions—

The nearest campground is Big Meadows, about 14 miles south. The campground is usually open from early March through Thanksgiving weekend. Reservations are strongly advised. The lodges are seasonally open, with Skyland opening earlier than Big Meadows. For more comfort, consider staying at Skyland Lodge, about three miles south, or at Big Meadows lodge. See the External Links section for links to pertinent information.