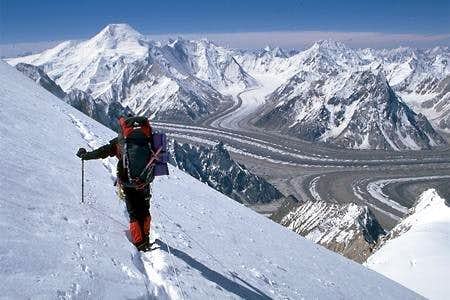 K-6 is a beautiful peak of the Karakoram Range and is situated in nearby glaciers are Lachit, Charakhusa and Nangmah. In 1955 members of Harvard Mountaineering Club Karakoram expedition, while exploring Hushe valley, examined K-6 peak. In 1961, the 15-member Royal Air Force karakoram expedition, entered hushe valley to survey and climbing K-6 peak from Nangmah valley. But it gave up the mission later. A survey party was however, left behind to map Chogolisa, Gondoghoro and Masherbrum glaciers. The party then climbed smaller peaks like Hunch Back. Etwar and Mitre,(different from the famous Mitre peak near Concordia). In 1964 the Germans from Berlin Mountaineering expedition tried to climb K-6 from kondus glacier. The party could go up.K-7 This peak is situated in the nearby glaciers are Kaberi and Charakhusa. Its height as 6,935m.It was in 1955 that members of Harvard Mountaineering Club Karakoram expedition examined K-7 peak with a view to climbing it. In 1976, an eight-member strong party of Fukuoka Climbing Club expedition from Japan tried its luck on the peak. It, failed because of shortage of time. In 1977, the Japan Asia University Karakoram expedition, led by Nobue Sakamoto, attempted the peak from its west face through Charakhusa glacier but was unsuccessful. The party consisted of 12 persons. Its climbing leader was Hiroshi Ishikawa. In 1982, another Japanese party called Hosho expedition, led by Masayoki Hoshina, attempted the peak again from Charakhusa glacier. The six-member party could reach 6,096m. Again in 1984, an Australian expedition of Roddy Mackenzie, which consisted of four persons, tried its luck on this peak, but could not climb it.In the same year the Japan Ski Alpine Club expedition of T. Nagata, which consisted of eight persons, also tried to climb the peak. Three of its members reached the top on the 8th August. Next day, the leader and two other members also reached the peak. Earlier, the party set up five camps and a base camp on Charakhusa glacier.


The beautiful small valley of the sharp spires K 6, K 7 and Link Sar which is situated at the Charakusa Glacier, It is the most amazing alpine area. The area between Sapingser and K 6, K7 base camp is A climbing paradise, K6 which is the culminating point of the well known Kondus Towers hes been seriously attempted three time before in 1969 form kondus valley by the Berlin Karakurum Expedition, in 1961 by the British R.A.F. Expedition and 1969 by an Italian Expedition. with ascents possible on several peaks and many rock walls, Head east into the ablation valley north of large Charakusa Glacier, (Charakusa means a Small Spring), The variety of objectives the valley mostly filled with rock and laden glacier, and lush part of the moraine, covered in wildflowers, most of the peak are under 6500 meters, that is certainly offer best technical climb you ever have, get a Trekking permit, no peak permit is require, Travel with your friends and have a life Experience.

view with these great mountains and enormous glaciers!