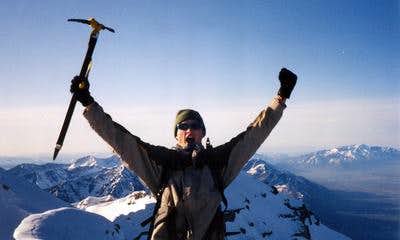 People who climb the same things as eigerkidd1

Brennan Larson, whose name was eigerkidd on summitpost, perished in the Peruvian Andes in the Cordillera Blanca on June 22, 2006. He was from California and was attending Brigham Young University.

According to his family, Brannan was an experienced climber. He and two partners, Dustin (23) and Kristen (21) Yoder all perished on 19,682' Artesonraju. The exact nature of the incident has not been suggested, but according to a Desert News.com article, it is possible the trio were swept off the mountain by an avalanche.

It is with great sadness that Brennan's profile page is memorialized at here at SP. SummitPost members and staff extend heartfelt condolences to Brennan's family and friends.

From SP's Fowweezer: "Despite Brennan’s death in the Andes, he was known by those who climbed with him as a safe climber. His death comes as a shock to those in the local mountaineering community and many who have climbed with him, as his attention to safety was nearly unparalleled. He was an active member of his college’s outdoor adventure club, and a well-rounded outdoorsman of all types. His love of adventure never ceased, and so when his planned partner to Peru declined to go, he insisted on continuing the trip alone. A word from a former partner (Brennan and I attempted the North Ridge of the Pfeifferhorn six weeks prior to his trip to Peru): It's 5:00 pm and it looks like a storm is coming to the Salt Lake valley. The deck chairs on the south side of the building provide a little bit of isolation for my pre-work cigarette. I don't smoke often. The wind begins to pick up and a few raindrops fall as the news sinks in fully for the first time. My mind worked on tangential subjects for the last hour, but staring at Lone Peak and the Alpine Ridge in the distance it focuses more severely. The afternoon was spent considering what I should do. I looked at the photos from the Pfeifferhorn briefly, and I thought about what I would say to your other partners. I'm sure some have already heard. I decided to try to contact your parents, but that would have to wait until tomorrow. The University registrar's office wouldn't be open on the Fourth of July. Today there is a typical afternoon thunderstorm. I haven't been on a real route in ten weeks, since that day glissading in Maybird Gulch. The wind reminds me of being on a high peak again, and that we had plans to do a couple of local alpine rock routes later this summer. The day before you left for Peru I finally got around to sending you a couple of the pictures from our climb in April. You promised that you'd send me the ones from your camera, but you couldn't at the moment. You see, your plane was leaving in the morning, and you hadn't finished packing yet. Three weeks in Peru? Sounded great to me, and I was incredibly jealous. We promised to get together later and I made lists of the routes I wanted to do before summer faded into fall. Now all I can think about is that Mark Twight essay "A Lifetime Before Death," where he lists his fallen partners. I suppose now my own list will start. The picture of you with blood on your face, smiling, is emblazoned in my head. Spring Wasatch mornings don't get much better than that, and the picture tells the whole story. I had made it my desktop background at home, complete with our light-hearted comments from the day: "Alpine climbing is war!" and "It's not fun until you bleed." I'll go back and finish the route now I guess. I can't remember why we didn't in the first place, but I vaguely recall that it was getting late and we were moving slowly. I wasn't feeling "it." I think my motivation had already started to wane, and I wondered why I caused myself physical pain on such a regular basis. The trend continued, but each time I spoke with you, the old feelings came back just a bit. Now they are back completely, and I long for the mountains. The harsh overhead lights hurt my head for the first time, a complaint I occasionally hear from coworkers. I had never noticed until now. Everything seems just a bit surreal, a bit more powerful in its affect on me. Like a reed in the wind, I don't have the strength to resist the forces that surround me. I'm certain that information will continue to trickle in from Peru. Condolences come from others in the climbing community, and the inevitable second-guessing begins in the news articles that report your death. Questioning your experience seems rash when it comes from Peruvian authorities and others who never knew you and never climbed with you. I know the truth of the situation now, and read with disgust the opinions of armchair mountaineers who judge based on your age. I spoke with your roommate earlier today and we both agreed that you had probably summitted, given the length of time you had been on the mountain. It seems likely to us at least. I guess it's time to do some work now. I just wanted to say hello and let you know about things here. We'll keep on and I'll be sure to get back to the North Ridge before too long. But hey, remember that I've got those photos waiting for you. I'll put the CD on my desk. It'll be here for you, whenever. To Brennan: It was an honor to have shared a rope with you. I am merely sorry that I will not have that opportunity again, and that we will miss out on those rock routes this summer. You will be missed. Climb on."

See all of my 7 Images:
Highest Score
Most Recent 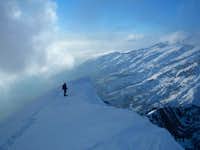 This peak makes a nice easy... 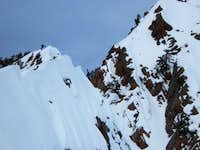 making way up the south ridge 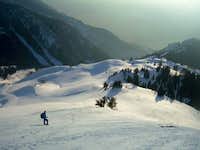 Winter Descent. Wish I had a... 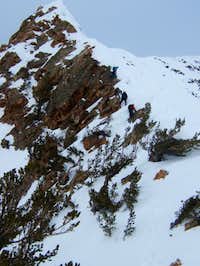 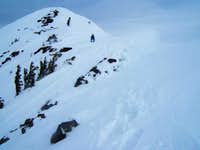 approaching the summit. the... 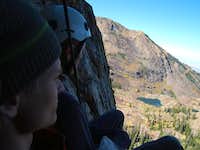