Crossing the ridge of Jezerske Babe is one of the most beautuful, but demanding hikes from the Vellacher Kocna / Belska Kočna valley. You ascend up a solitary valley, do a pathless shortcut on the main ridge, ascend the highest summet and then cross by a sharp ridge all the way north to the nice Jenkova planina alpine meadow. The descent from it concludes this great round tour. As crossing the ridge is already described in a separate route description (here), on this page I shall describe only the summit ascent. 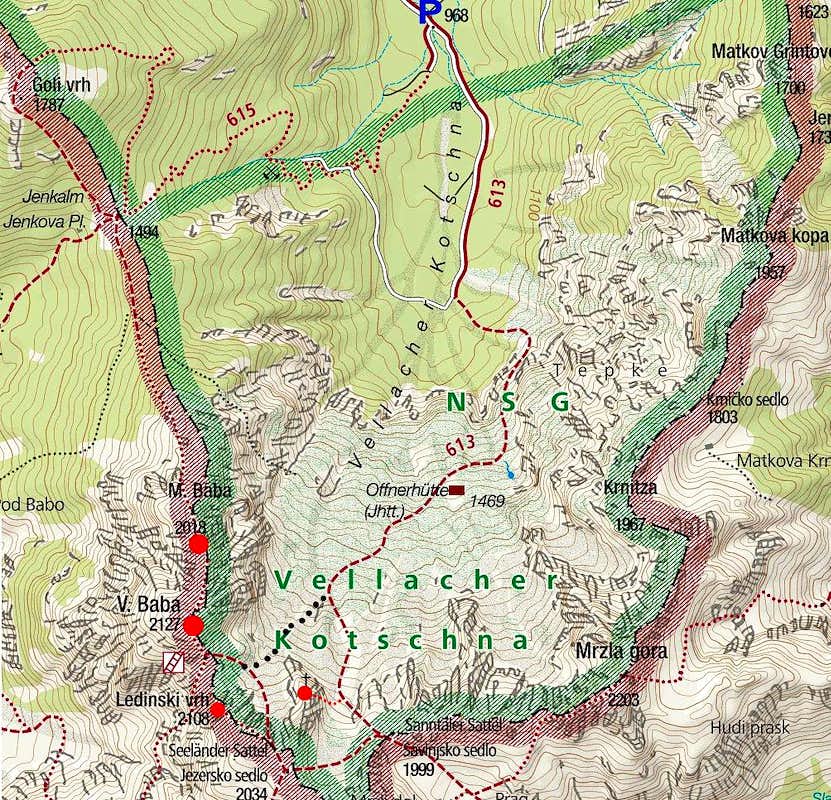 Difficulty: It's a hiking tour, on some places steep and exposed. On the Swiss Hiking Scale its difficulty would be graded T3. The majority of the hike is T2, protected with steel cables and pegs is a short passage from the end of the valley over the first cliffs and then the summit ascent from the notch SE of Velika Baba on top. (The continuation of the ridge towards the north is much more difficult - UIAA I climbing in descent, T5 overall.)

Orientation: Most of the route is well marked, below by a combination of green and red marks, the summit part by the usual Slovenian mountain marks. On crossroads below in the valley there are good inscription plates. A part of the route goes by a pathless terrain, but in good visibility orientation is easy. Map to be recommended: Grintovci. Planinska zveza Slovenije, 1:25.000. A good source is also the Austrian Map online. See also the GPX track in the header (the shortcut, described in the route description, is not considered - the track goes around by the marked path).

Exposition: Some places below the summit are exposed, so the route is not appropriate for people suffering from vertigo.

Objective dangers: There are virtually none. If stormy, beware of lightning on the ridges!

Gear: Good shoes and poles are sufficient. (The continuation of the ridge towards the north in not protected, so a ferrata set is useless.)

Tour start: The road into the valley of Vellacher Kotschna / Belska Kočna deters from the main road (Bad Eisenkappel / Železna Kapla - Seeberg Sattel / Jezersko sedlo) just above Bad Vellach. This is at first the road, going on Paulitschsattel / Pavličev vrh, but very soon the valley road deters right from it and follows the Vellach/Belca creek. After some 2 km, there is a good parking place (before the road barrier), 960 m. Don't drive past the barrier, even if it's opened.

Altitude to overcome: On the ascent some 1180 m. (if you descend by crossing further the north ridge, there are some more ups and downs on the ridge).

Time for ascent: 4 h. (For the round tour by the north ridge descent count 8 h).

The pathless passage on the main ridge 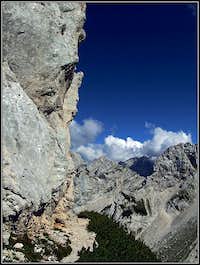 The ledge below Velika Baba summit

Between the sharp ridge of Vellacher Turm / Storžek and the massif of Velika Baba a steep slope, cut by a distinct ravine descends from the main ridge. From our standpoint on the bottom of the passage, we see on the right the ravine, on the other side of it, on the slopes of Baba, we see a hunters path and one option is to reach it and continue by it upwards. The other, even shorter option is to go straight up. From Vellacher Turm / Storžek big, unpleasant scree slopes are falling down. But if we keep just right of them (looking upwards), we shall quickly ascend till just below the main ridge. There from the right the hunters path comes up, we cross the ravine and soon reach the marked path, which comes down from the left, from the saddle between Vellacher Turm / Storžek and Ledinski vrh.

Then in a few minutes we reach towards the right the saddle 1989 m, between Ledinski vrh and Velika Baba, which is just above us.

The summit ascent starts on the saddle. Just above the saddle is the place, where from the other side over steep slabs also the ferrata from Ledine comes up. We ascend some 50 meters by the main ridge, then left on the slabs, over them up and again by the main ridge till the place, where below a vertical rock barrier it looks that no passage is possible. But a comfortable ledge takes us horizontally over the southern slope of Velika Baba, after which the path turns up again, so that we reach the summit from the western side. This last part from the saddle is very picturesque, but also a bit exposed on some places.