Mt. Konocti is a massive multi-summited lava dome volcano. It sits on the south shore of Clear Lake on the Clear Lake Volcanic Field which includes a collection of small domes and cones spreading to the south. The area is considered still active potential threat by the USGS but currently normal.
The isolated location on the edge of one of North Americas largest freshwater lakes with the volcanic field spread out to the south, east and west give it outstanding unobstructed views in all directions. The nearly 360 views include most of the mountains and ridges of the Mayacamas Range to the west and south, the Mendocino National Forest to the north and the Cache Creek Wilderness, Cortina and Blue Ridges to the east.. 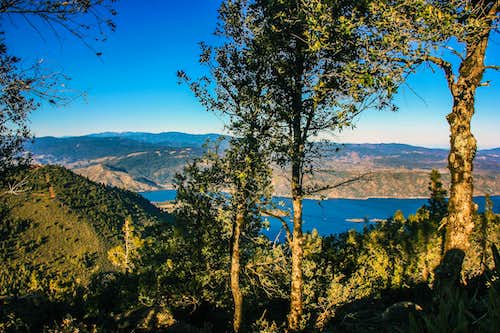 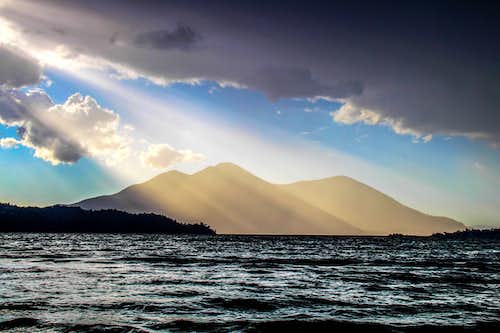 Buckingham Peak 3,967' is the lowest of the main peaks and rises directly above Soda Bay on the south shore of Clear Lake. It has good views down to the east out to the Cortina and Blue Ridges before the Sacramento Valley and back to the main Konocti massif. View west and north are partial due to trees 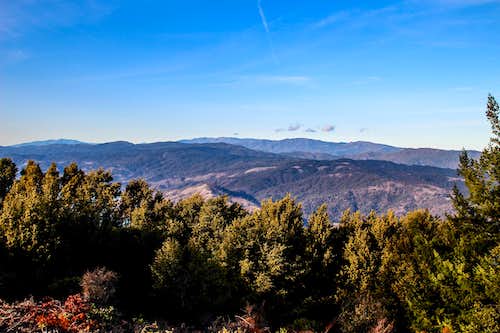 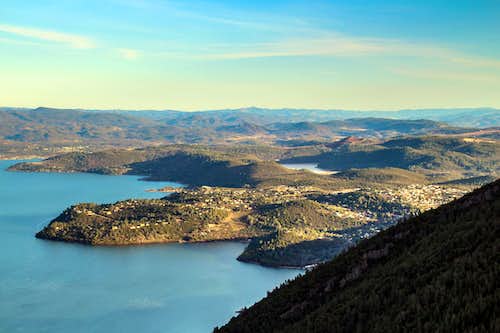 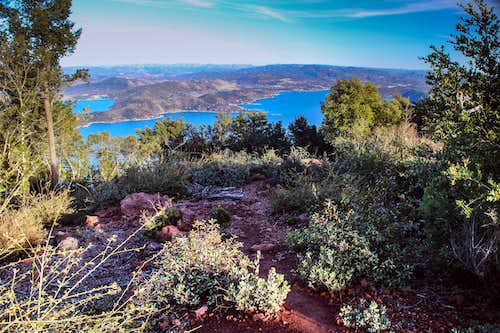 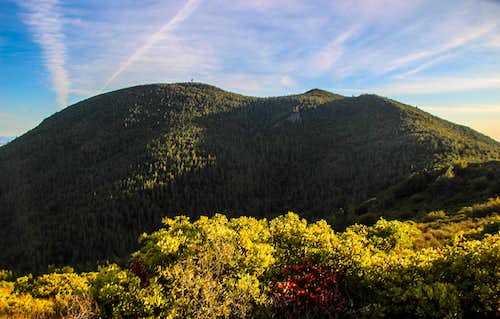 This is the second highest 4,286'. It is a small rocky summit easily accessed from a short road just off the main trail to Wright Peak. The best views are to the south, west and northwest. 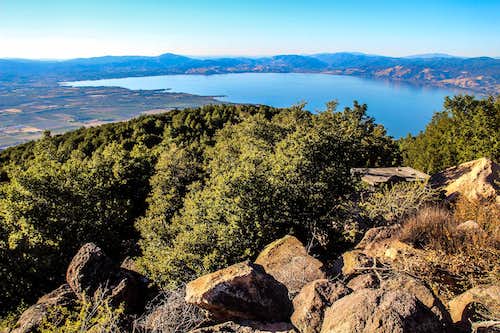 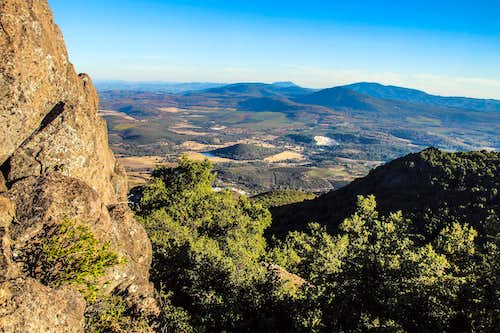 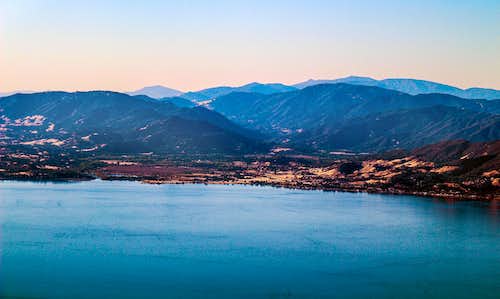 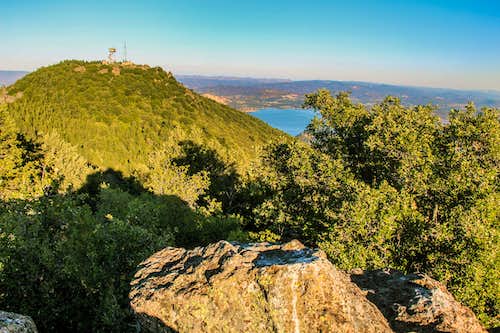 This is the high point on Konocti 4,299'. It is the end of the trail .4 mile past Howard Peak. There is an informative sign post with arrows pointing in the direction of prominent peaks that are supposedly visible. Some of the info is incorrect (like listing Shasta at 14,440'. They where probably confusing it with Rainier). The view directly east is blocked by trees. The view northwest has been opened up more with the clearing of trees to build a foundation for a building of some sort. If you go down beyond the pines just north of the tower more is visible from a few rock outcrops.
The overall horizon views include Mt. St. Helena and the Napa Valley Palisades over to Cobb Mountain and Geyser Peak to the south. To the west is Cow Mountain and Cow Mountain Ridge. To the north is Hull and Snow Mountains and to the east is ths Cortina and Blue Ridges before the Sacramento Valley. 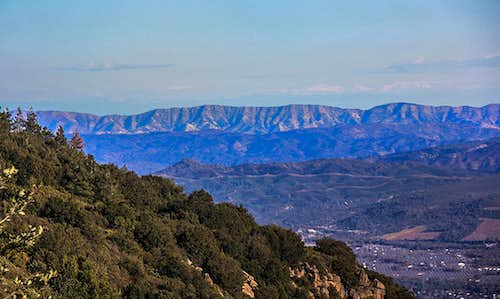 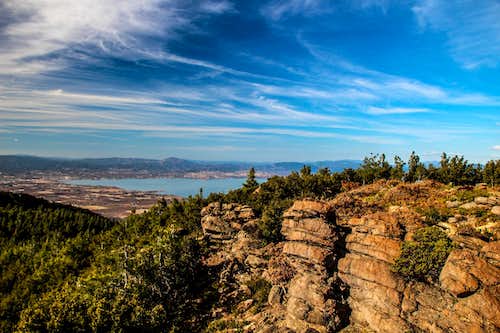 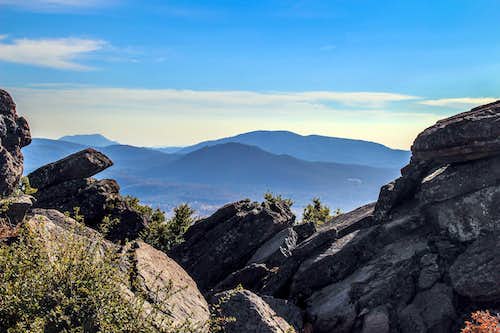 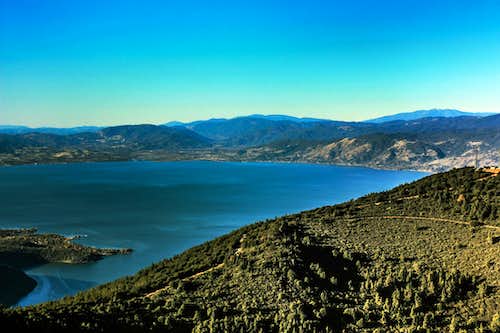 At 2,900' down on the northwest side of Konocti Clark is an afterthought for views but has a route up and is actually the only challenging peak in the bunch due to dense brush and class 3 summit rocks. 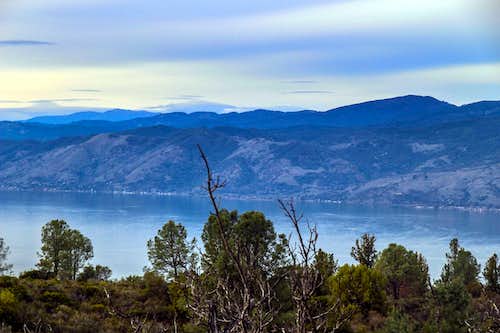 North over Clear Lake from  below Clark Peak 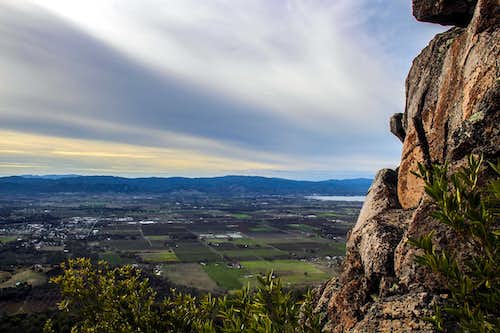 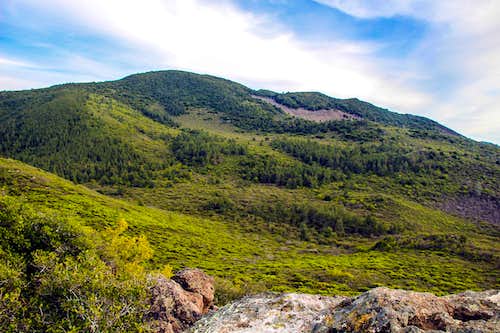 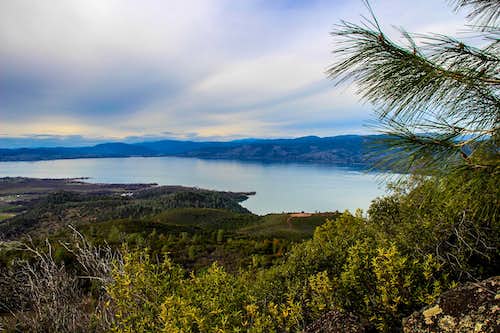 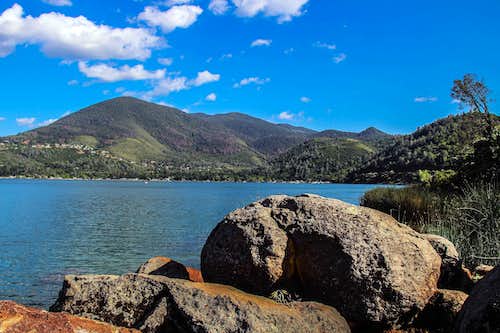 Mt. Konocti from Clear Lake State Park beach
The mountain is about 350,000 years old and last erupted 11,000 years ago. The name means 'mountain woman' in Native American.
The geology at the base of Konocti leads to the belief that a huge empty underground magma chamber partially filled with Clear Lake water is below. Possibly the largest on earth. This is difficult to prove because the volcano core is unstable and eroding.
There were many natural caves that collapsed or were filled in early 20th century.
Legend has it that a severe drought in 1818 brought the lake level down low enough that Pomo Indians entered and found a huge cave with an underground lake on the east side inhabited by blind fish. Later repeated attempts by divers to dicover the cave were unsuccessful.
The local Indians have always respected and feared the mountain.
The indian legend is that a tribal woman had quarrel with her husband, bolted in a huff telling him she would never see her again. They later found her on the mountain crushed by a giant snake.

The top of the mountain was privately owned until Lake County bought it in 2009 and created the Mount Konocti County Park.

On January 26 1970 Mervin and May Enzler crash their 1946 Navion A single prop plane near the summit in bad weather. A piece of the fuselage is still there along with a commemorative plaque.