On this day, I learned a lot about dealing with stress under pressure, teamwork, the gifts of angels on the trail in the form of people/other hikers,the stress of feeling responsible for someone else on the trail, and I also learned how amazingly beautiful and majestic Kelly Butte is. 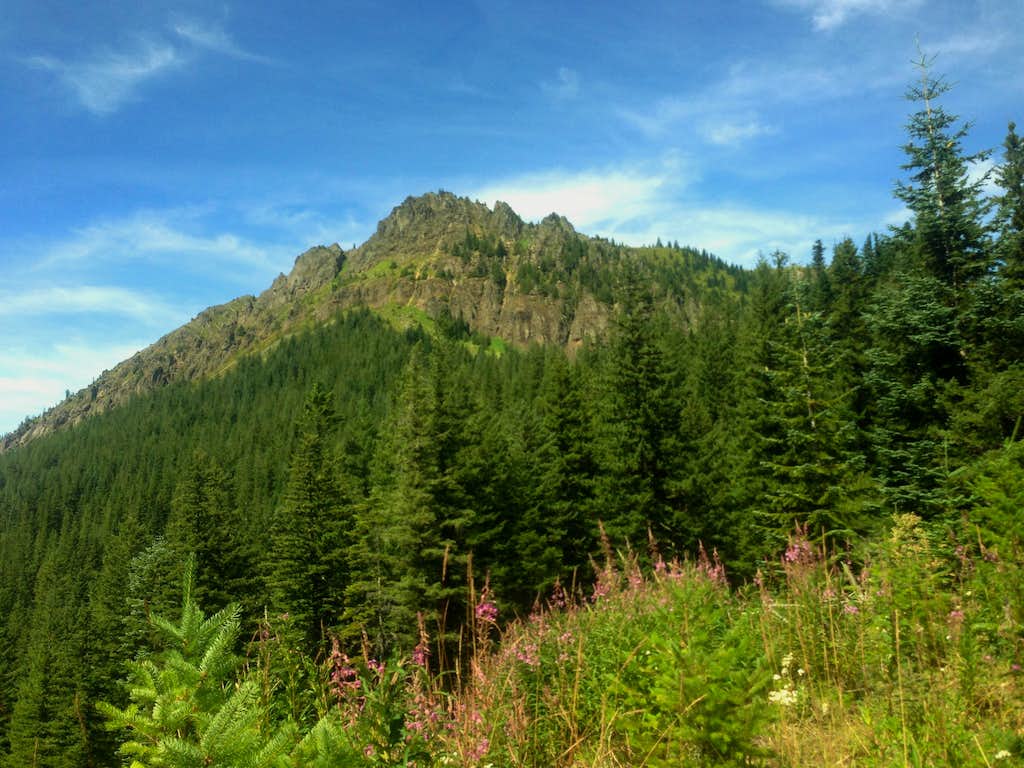 Kelly Butte from the trailhead

The beginning part of Kelly Butte was definitely easy for me, and I felt a sense of peace and willpower and fortitude as I started the trail with a wonderful hiking partner we brought along and my husband invited through a friend of his named Sherrie. The beginning of Kelly Butte starts out like a regular trail, but quickly starts graduating up into challenging footing (for me, grant it, I am 100 pounds overweight) and some really steep sections.  The biggest thing that I struggle with, as my wonderful and experience, beautiful hiking husband Greg knows, is my sense of “exposure” and Kelly Butte definitely has that for me.  For EastKing, this mountain is very easy to him, as most that he does with me are. 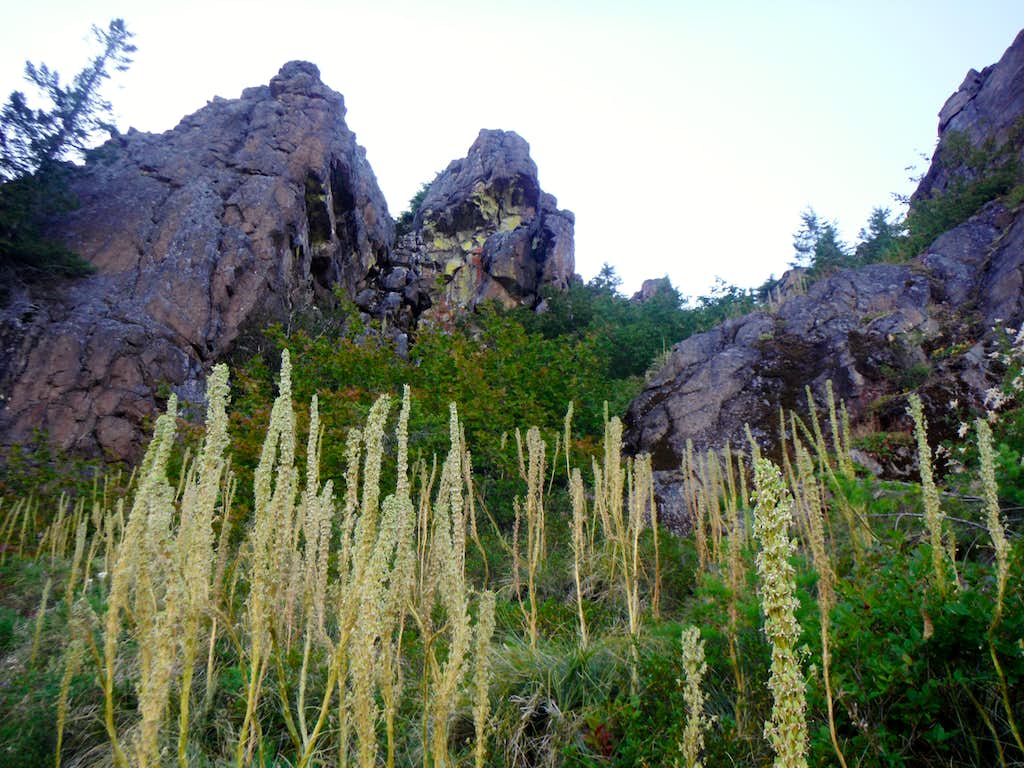 The trail travels through there

Kelly Butte has some varying and interesting landscape and after the part with the tricking footing and the jagged rock (which was really awesome, and gave me a Hobbit like feeling as some Northwest trails do have this medieval feel to them, so picturing myself as the Wizard  really helps, because in the Hobbit, he has to maneuver some really steep sections and really steep sections, so it helped me a lot to picture that, and I was very successful!) 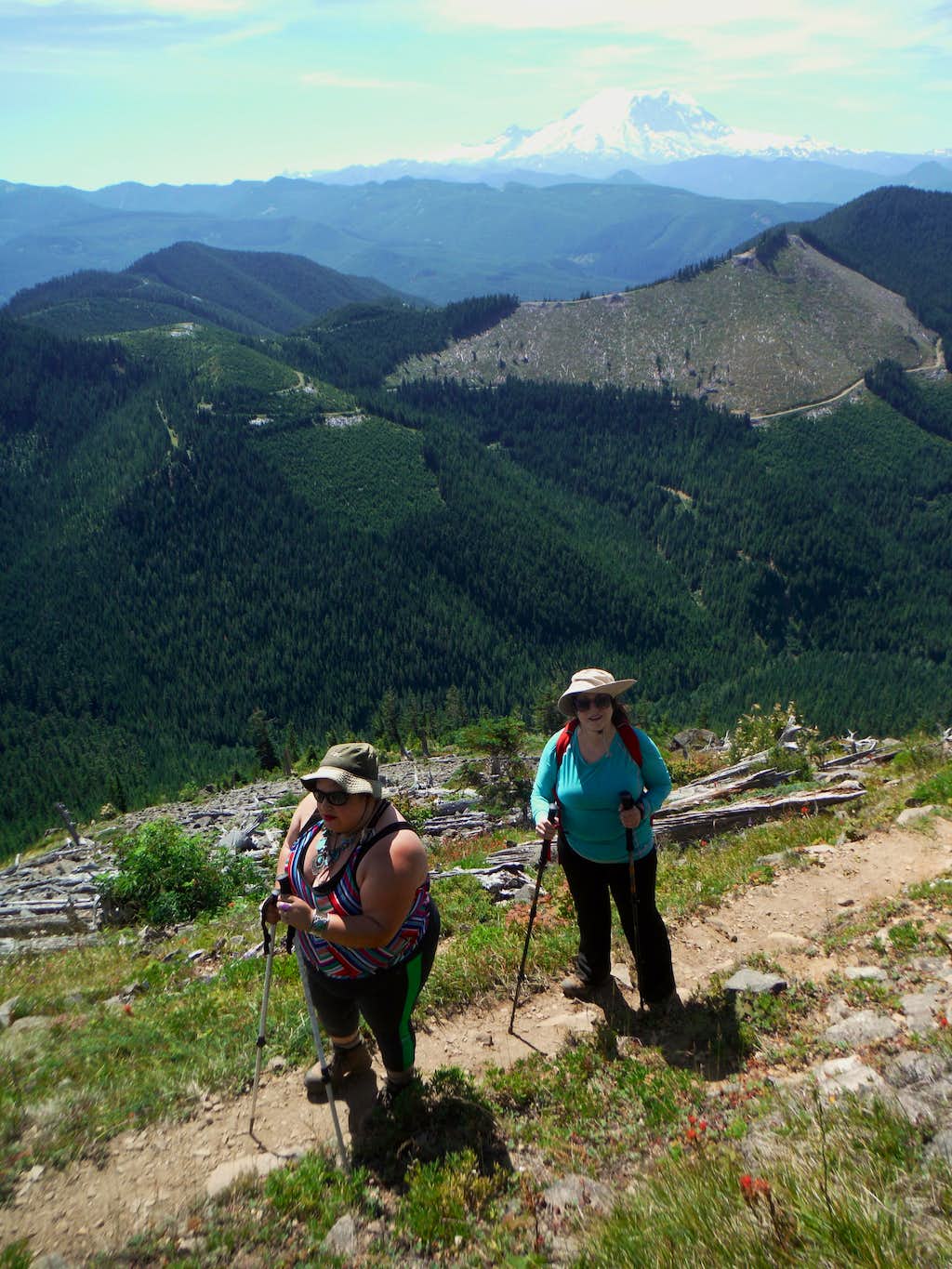 BearQueen and Sherrie heading up the trail

Sherrie was pretty fit but wanted to take it slow because she is just getting back into the sport of hiking. Aside from EastKing, who is an amazing partner to hike with and who I am blessed to have as a husband, who always lovingly encourages me on the trail, no matter how bad my fibromyalgia and chronic pain gets…Sherrie was really the best person I could have gone on this trail with.  For one: She is patient, loving, compassionate and gave me many encouraging words on the whole entire trail.  She kept saying things like, “You are doing great.” “You can do it.” “I am here for you.” How much more perfect can one get? 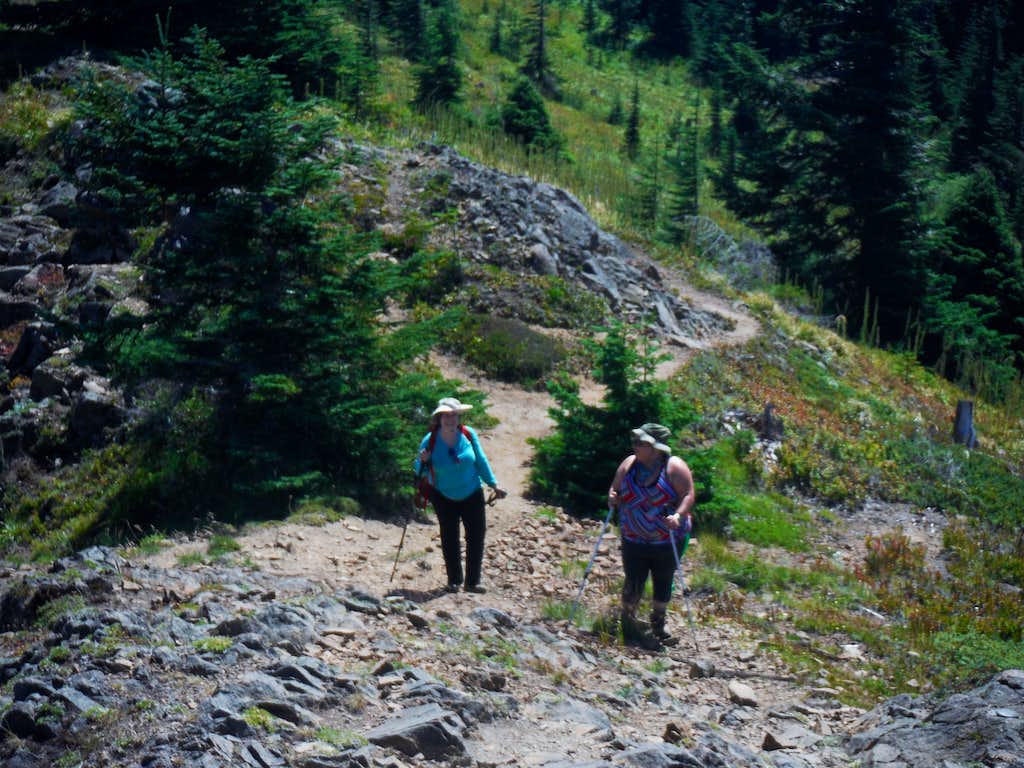 BearQueen and Sherrie about to enter the summit

EastKing stayed steadily behind us, and was really great the whole time. Along the way, what I loved was the constantly changing geography about the mountain and on the way up.  There were beautiful wildflowers on the way, and many places to appreciate views.  What I did not bank on was how amazing the views are from the new lookout tower that was done.  Greg had explained to me how many people had rebuilt that tower and how much love had gone into it.  Greg, me and Sherrie felt like we were so blessed and lucky to be up there, and we were able to really take in the view for a little while and we just sat there and pretended the lookout tower was our mountain home for a while.


EastKing showed me, amazingly, his old entry in the well loved spiral notebook that served as the Summit Log, and he had signed it from 2010! I cannot remember who EastKing originally went up there with, but I am so proud of him for doing all he has done and the summit log helped me remember just how active EastKing has been since we have moved here in 2007.  As we were doing this, I remember saying something to Sherrie like, “This could not get any more perfect” and then we saw some other hikers (the three people who would end up staying there for the night) bounding up quickly to the summit where we were.  Sherrie said jokingly, “We charge chips as a price of admission!” and they laughed.  There were two men in their fifties or sixties and a woman in her fifties, ( I could be wrong about their ages).  When they got up, one of the men said that the “little white car” had a flat.  So, I was like someone had slapped me in the face, and we immediately went into overdrive.  I started to get into action mode, b/c I tend to be good in a crisis. We were all stressed out and uptight. When I feel responsible for other people, I get upset and feel pressure and being that EastKing and I have no money, it was hard for me to feel that responsible for Sherrie.  The fact that our phones even worked on that mountain was incredible, but the service kept going out at the worst times when I was trying to call AAA.

Our biggest challenge at this point was getting a way to get off the mountain when we got to the bottom with being poor and having very, very limited resources.  After finding out hat AAA considered the head of the trailhead too far out of their way (Many dirt roads and potholes later), and me taking action to figure out a plan, we had a lot of feedback from the locals who were camping out and spending thenight at Kelly Butte at night.  We found out that one can sign up to stay there (I would love to do it next year) in the town of Enumclaw.  I would like to go with more than three people for safety reasons, and they were a party of three.  They had guns, food, sleeping gear and alcohol.  I would not bring alcohol out of respect for myself, the mountain and Mother Earth.  However, I have/had great respect for these people, as they gave me, Greg and Sherrie some ideas about what to do.  They said we could try different places that might tow or meet us in Enumclaw and we tried them.  We then talked to another guy on the trail who said he could and would fix our tire with a “fix a flat” but since I was ignorant about the product (The one he fixed our tire with was the one made for trucks, and believe it or not, the tire is still going strong today, and Les Schwab said the one he fixed is in better shape than all of our other tires), I thought at the time that it was a bad plan. However, after we hatched a plan that I thought would be harder initially, but easier in the long run, it turns out that this plan did not work, and that when we got back to the car, that man angel had actually fixed our tires.  The plan we actually went with (the harder plan) was calling Greg’s friend Angelo and asking him to go to a Les Schwab and buy a tire that would fit the car. 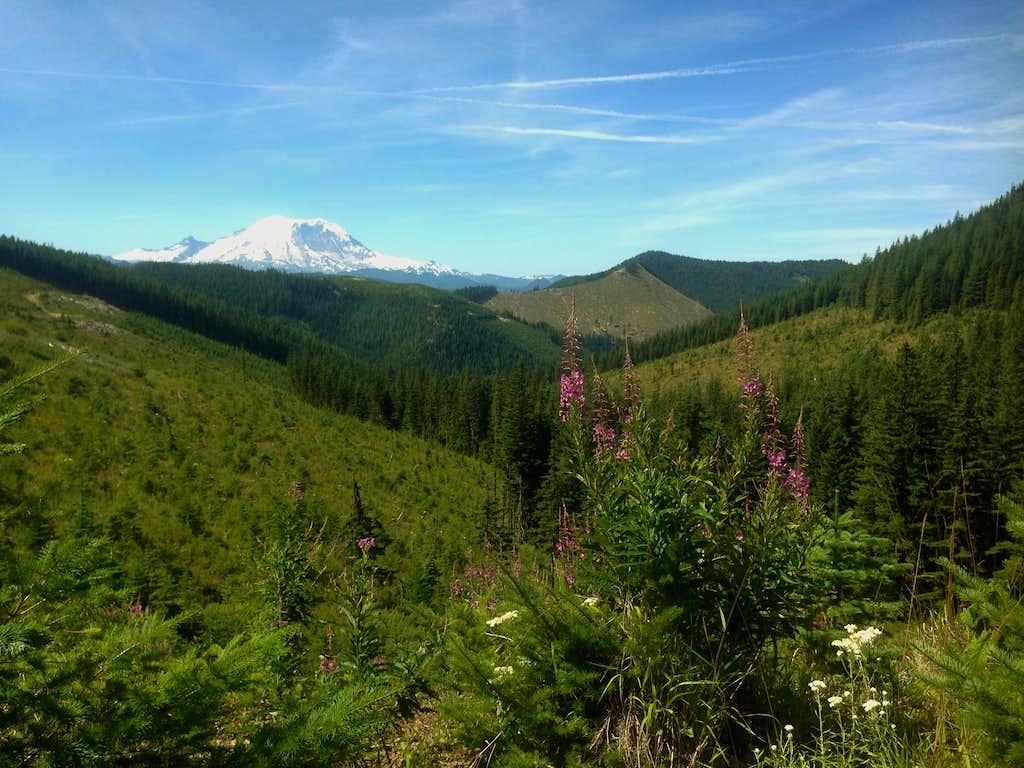 Mount Rainier from the trailhead earlier that day

When we got to the trailhead, Greg went ahead to see what was happening with the car, and then he came to me and said that the tire was not flat.  I marveled at the fact that this guy who fixed our car did it with a “fix a flat for trucks” and the tire seemed fine.  It has been fine since!  I just never got a chance to thank that stranger.  We did not see Angelo when we got to the trailhead after getting down, and seeing that the tire was fixed, we just kept heading down in the car, and then I kept sensing  psychically that we were going to pass Angelo.  We did, and it turns out after we pulled over to a place in town, that the tire was too big for the car.  However, through it all, I learned that some people, though they are not always in our lives constantly, regularly or even a little bit, they can be there for us and come through.


Angelo is someone who Greg and I had been trying to get to hike with us for a while. However, I told Greg that after Angelo came out to meet us that we should never bother him about hiking again. Sherrie ended up being worried about her nice car across from Westwood Village late at night, and I believe we got back there by 11 and Sherrie got her car. She was really supportive and great through the whole ordeal.

Sometimes, great mountains have great lessons for us, and this mountain taught me about the kindness of strangers (the three people at the top) and the compassionate and amazing things people can do (The guy who fixed our tire at the bottom), my own stamina when I have more of a laser sharp focus, and how striking some mountains can really be.