Many routes lead to the summit of Vojak, 1401 m, the highest point of Učka massif. For hikers and for bikers. Most of them go by ex shepherds paths. Here, I'm describing a round tour from Lovranska Draga village, a combination of two marked trails, which even has some variants: 1. Ascent: Lovranska Draga - Lazi - Vrata Pass - Sedlo Pass - Vojak, 2. Descent: Vojak - Sedlo Pass - Medveja trail - Lovranska Draga.

Instead by Medveja trail, the return could be also done via Babin grob hut.

Difficulty: Technically all trails are easy (T2). But the elevation gain is considerable and the massif of Učka is big, so take care of proper orientation.

Duration: Average ascent time is 2 h 30 min, for the descent count the same.

Orientation: All the routes are well marked by inscription plates on key points and by red-white blazes, so with a usual map orientation is easy.

Maps: Even online maps are sufficient - like the here presented OpenTopo map or the OpenStreet map.

Objective dangers: There are virtually none. As elsewhere on Istria high regions, vipers are a danger to be mentioned. They are very poisonous, so don't stroll in suspicious terrain, where you can't see the animal first.

Best season: Spring and autumn, if not much snow, also winter can be fine. Summer can be hot and also visibility is usually best in other seasons.

Lovranska Draga - Lazi From the parking place a nice, well beaten trail ascends in the NW direction. On all crossroads follow the inscription "Vojak". The first branching is on some 710 m (the path to "Babin grob" deters left), the second branching is on some 775 m (just continue straight). Then you reach the meadow of Lazi, 840 m, with a cute hut.

Lazi - Vrata Pass From the meadow just continue straight, in the same direction. In a few minutes (on 875 m), you'll reach the mountain road. Just cross it and continue by the marked trail in the same direction. Now the trail goes through light woods and meadows, turning towards the W direction. Ahead you may even already see the big communication tower on the summit of Vojak. But it's still 500 m higher. You must gain the ridge left of it, on all eventual crossroads follow the "Vojak" inscription. Now the trail reaches below the steep ridge of Suhi vrh (on the left, 1333 m). It ascends it in the W direction by very steep turns. The pass on the ridge is called Vrata (=Doors), on the right we see picturesque limestone towers. From Vrata it's worth ascending on the first tower (3 min), because it offers nice views down on Kvarner bay.

The view from above Vrata

Vrata - Vojak From the bench on Vrata you continue westwards by a horizontal path and later a cart-road. After some 5 min you leave the cart-road and continue by the marked trail on Sedlo Pass, some 1250 m. That's an important point, the main crossroads on the ridge of Učka. From the other side, the path from Mala Učka village comes up and towards the left the path on Suhi vrh deters. But we turn right and follow the main ridge of Vojak. The path goes steeply up in many turns and is very panoramic. In some 20 min we reach the highest point. 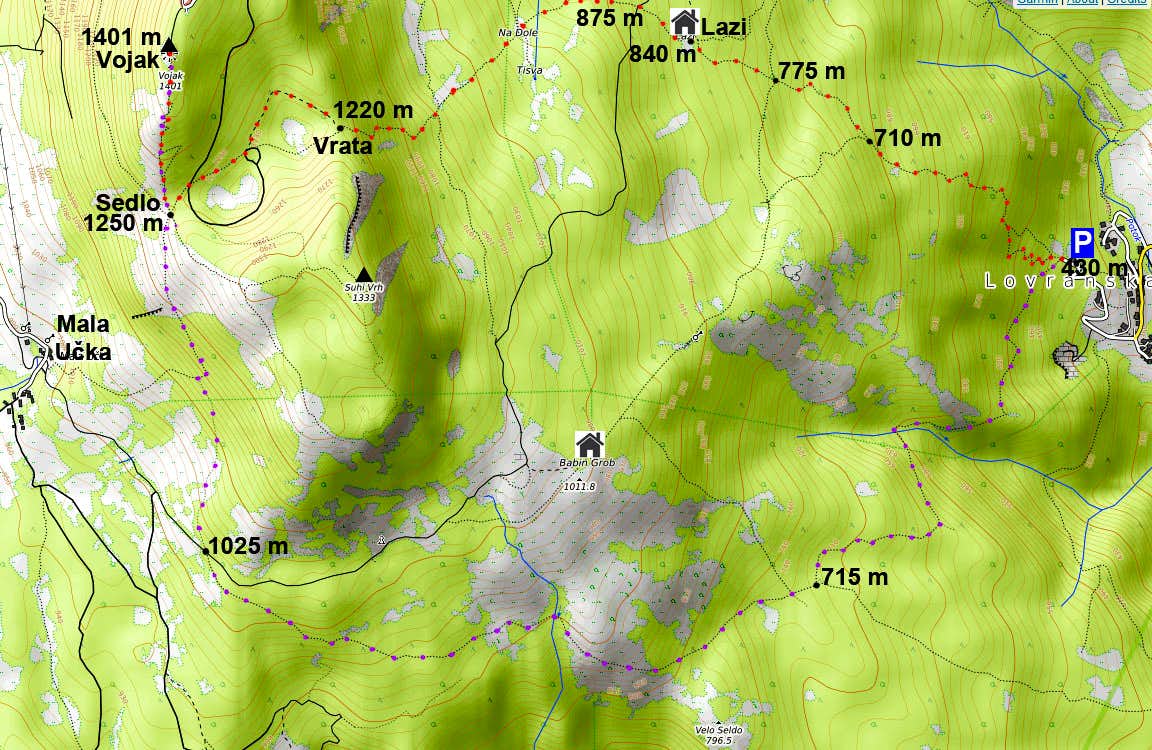 Vojak - road SE of Mala Učka From the summit of Vojak, we descend first by the same trail to Sedlo Pass, 1250 m. From there, we can either descend by the above route (shorter), or continue southwards, descending towards the Mala Učka village. On a big turn right, just some 10 m after it, the marks are showing also left down from the trail. That's a valuable marked shortcut. So, you don't need to go down into the village and there turn left, but you just continue southwards. On some 1025 m you hit the cart-road, coming from the village. But you leave it almost immediately. 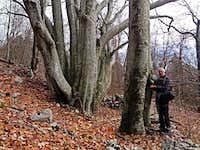 Road SE of mala Učka village - path branching SW of Lovranska Draga By the cart road you could continue to above Lazi meadow, or before it turn right to Babin grob shelter and then down to Lovranska Draga. But it's more beautiful to deter from the cart-road immediately on 1025 m and follow the trail down towards Medveja. It goes through nice light woods, by abandoned pastures, water sources and later open terrain. It goes mostly towards the east, right down you see the nice valley with Trebišća hamlet.

Path branching 715 m - Lovranska Draga After descending some 300 m towards the E, you must be careful. The first marked branching left goes upwards, to Babin grob shelter. But on the next branching you must go left, on a weaker, but well marked trail. It crosses the slopes towards the NE and in some half an hour reaches the village of Lovranska Draga.