Waking Up and Seeing Red

Checking Out the Menu

Las Vegas. Sin City. "The Most Irresponsible City on Earth," according to one SP member's profile.

No wonder it's so easy to fall under the spell of the neon and stay until you can't take it anymore or it won't take you anymore-- bled dry of your money and your dreams.

And I know I'm the kind of guy who, once he opens his veins to that brand of smack once, will be hooked until he's beaten the demons at their own games and thus become one himself or has fallen to bottom, everything gone. It's not about greed; it's about the intoxication of winning, of keeping the streak going and getting it back when you lose it. As has been said before, money won is a lot sweeter than money earned. But that pursuit can destroy a man.

Maybe that's why just about every time I've been to Vegas, I've cleared town as soon as possible, either that same day or, in the case of a late-night arrival, early the next morning. Maybe that's why I've gambled at the tables there just once in my life; I won $20 at blackjack, called it a career, and walked away, knowing all too well that the rush of just that small victory could easily turn a $20 gain into a loss of $200, $2000, or worse.

But my haste to depart always had a strange result: I never bothered to pay much attention to the splendor right in Sin City's back yard: Red Rock Canyon National Conservation Area, better and more simply known as Red Rocks. I'd seen some of the peaks from the road as I drove from Las Vegas to Pahrump, with Death Valley as my destination, and I even drove through along the Scenic Drive one hot summer morning, but that was it. No, I just wanted to clear town.

Things changed for a few reasons. First and foremost, photos posted by this SP member clued me in to the fact that there might be something a little special about this place. Second, two of my brothers moved to Vegas in the fall of 2008, and, as a housewarming gift, I bought them a copy of Rambles & Scrambles: The Definitive Guide to Peakbagging Around Las Vegas, written by the SP member mentioned at the beginning of this trip report. I respect his knowledge, experience, and opinions, and I figured that if Red Rocks was something he thought was worth devoting most of a guidebook to, I ought to check it out. Third, my wife and I had more or less decided to relocate to the Vegas area in 2010, and the proximity of Red Rocks and other spectacular areas was a major factor in our choosing southern Nevada over Phoenix or Tucson (no offense intended, AZ residents-- I love your state, and I like those cities more than I like Vegas-- but I love what's close to Vegas a lot more).  Update-- we never did make the move since the economy crashed just months before the planned relocation.

A two-week vacation from work in April 2009 gave me the chance to visit my brothers and take my son Jack (4 years old) with me. Brothers Chris and Mike are both good uncles who make a fuss over Jack and seem to truly enjoy being around him, but Chris is a truly great uncle and just dotes on Jack, and rumor had it that he really missed him (I have news for you, man-- you don't miss him so much when you have to live with him).

So that was the pretext, and, truth be told, it was the main reason. My wife was quite impressed that I dropped thoughts of a solo trip to the Wyoming desert and took Jack to Vegas instead. I'd have asked what reward she thought I deserved, but the woman's already "given" me three kids, and considering that I'd probably have asked for what got me into so much trouble in the first place, I figured I ought to be careful about what I ask for...

Oh, and there was this other little reason: getting a taste of Red Rocks as a sample of the meal that would await if we did move out there.

Not bad for working up an appetite...

Yeah, that's a little presumptuous, I know, but if you think that's a little too much ego, you apparently haven't been on SP too long. I could tell you some interesting stories, but that would be a digression, and it is plainly obvious that I simply detest digressions.

So, that review: Wow!

Each morning, as my son slept securely under the attentive snores of my brothers, I sped to Red Rocks around dawn to hike or climb something. And yeah, I saw red-- a lot of it.

I'll be honest-- I'm never going to be one of those world-class climbers who flock to Red Rocks in season; there are several reasons why, but they're not important here. I am simply content with going light and free, carrying little more than enough water, enough food, and a camera. On anything up to and including low Class 5, I'm willing and pretty good without a rope, and that's fine with me. Does that close some great peaks and routes to me? Absolutely. Do I care? Not really. My interests lie elsewhere. And Red Rocks, especially the Calico Hills and Calico Basin, spoke to those interests, which include solitude, discovery (or at least the illusion of it), route-finding, and scrambling. But that's enough; this is beginning to sound like a digression!

Anyway, sections of Red Rocks, not to mention other areas in the vicinity, look like a scrambling paradise, and I look forward to really getting to know the challenges, wonders, and secrets out there.

What follows is not the traditional trip report, which means it is not a minute-by-minute account of the outings(s). It is not even in the mode of my own traditional trip report, which tends to focus on relating an experience that was frightening and/or perspective-changing. Instead, it is a series of photos from my morning climbs, with informative (I hope) captions. Please click on any photograph to read additional details. 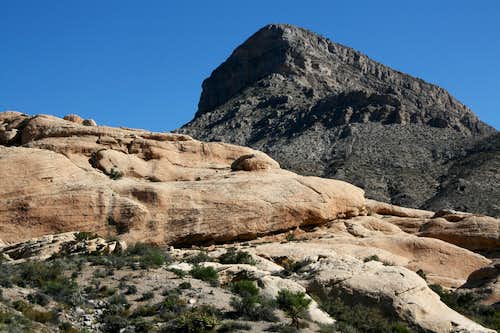 It's pretty hard to see a picture of this peak and not want to climb it. Shortly after arriving at my brothers' house and dispensing with all the niceties, I got down to the matter foremost in my mind-- grabbing the map and guidebook for Red Rocks and figuring out what to do the next morning. I noticed a trail climbing Turtlehead Peak and decided to make that an objective for the last morning of the trip. As things worked out, though, I found myself up at dawn even though I went to bed at the equivalent of 3 A.M. in Virginia. My son was sound asleep, and so were my brothers; with no way to tell when everyone would wake up but guessing it wouldn't be soon, I knew I had to do something. And so my last morning's objective became the first morning's (a good thing, too, since the last morning was a cloudy throwaway that could do little justice to the beauty of the Calico Hills), and I got my first real taste of Red Rocks. The hike up Turtlehead not only was a great way to start the day but also was a nice way to whet my appetite for more; in fact, I returned that afternoon with my son and my brother Mike to the same trailhead, and we climbed an unnamed beauty of a peak I have come to call "Tinaja Peak," owing to all the water-filled tanks (tinajas) we found on the peak. It's safe to say I was already hooked, or at least close to it. 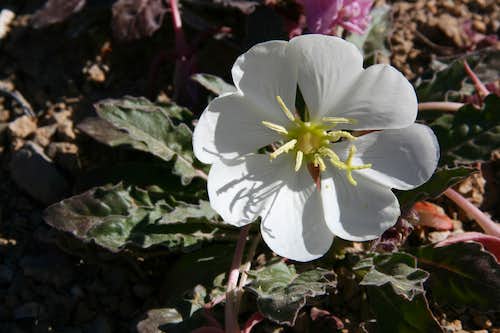 As the trail left the washes and began to climb steeply up to the western ridge of Turtelehead Peak, more and more evening primroses came into view. There is something about seeing these flowers, which begin to wilt soon after direct sunlight finds them, that I find irresistible and moving. 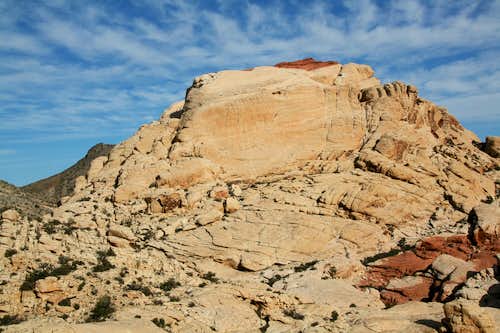 Red Cap-- highpoint of the Calico Hills. The day before I first saw it, I had no idea this peak even existed. When I got to my brothers' house from the airport and faithfully checked SP within minutes, I found a PM from another SP member who had given me some peak suggestions and with whom I'd like to go out for a climb. In the PM, he said he'd be heading up Red Cap in Red Rocks around 8 the next morning to replace a summit register. It was already midnight Vegas time, so I didn't reply, and at that moment, I still didn't expect to be up early the next morning anyway (see the Turtlehead story above for how that one turned out). Besides, I didn't know what or where Red Cap was, and my brothers were presently unsure if the Red Rocks guide I'd sent them was still living or if it had been among the objects eaten by the dogs over the past few months (they did find the book, still intact except for a missing front cover, and its rear cover went through Bogey's digestive system a couple of days later). So little did I know that while I was hiking up Turtlehead Peak the next morning, that other SP member was climbing Red Cap, accessed from the same parking lot, at the same time! 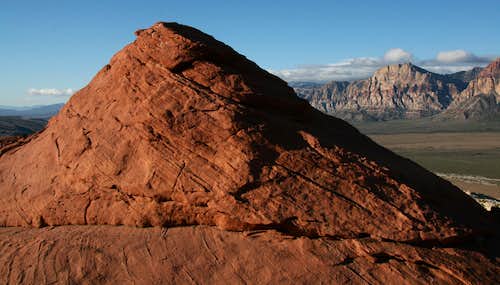 Without a doubt, the climb of Red Cap was my favorite single outing of the trip. It is the perfect early-morning climb-- scenic, colorful, interesting routes, and quiet. It is also a short enough climb to allow you to be back home in time for a decent breakfast, a shower, and a nap before heading out for the afternoon to climb something else (I got to climb Red Cap and then the White Domes in Valley of Fire State Park on the same day-- there are worse ways to spend a day). I saw not one other person while on the peak, and I was the first person to sign the new summit register! 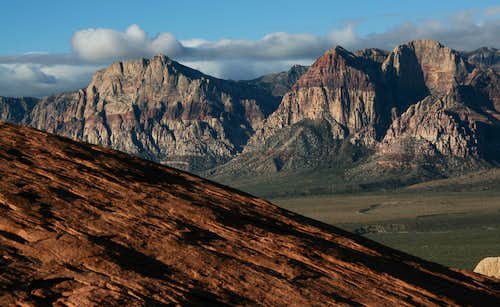 Just one of many incredible views... 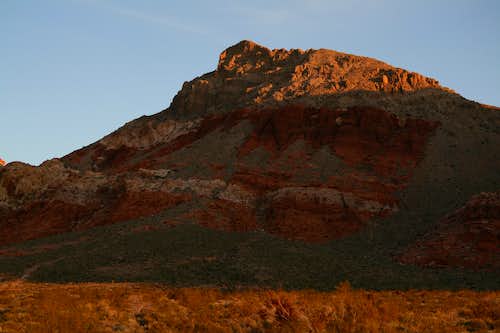 Not my last morning outing of the trip, but the last one with the kind of lighting that really shows off the colors out here...I went out to climb Kraft Mountain and New Peak, both of which involve some fun Class 3 sections. The peaks around Calico Basin are not quite as spectacularly colorful as the peaks in the Calico Hills are, but they have their moments. They also seem to attract far less notice than the trails and peaks of the Calico Hills do. 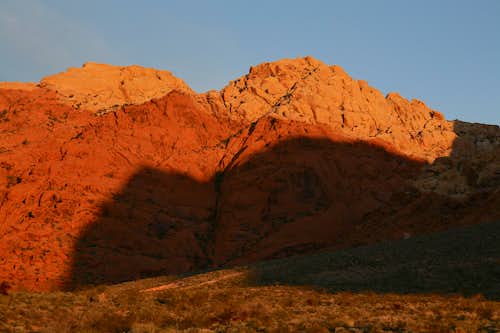 Any thoughts as to why the area is called Red Rocks die quickly when you see something like this...