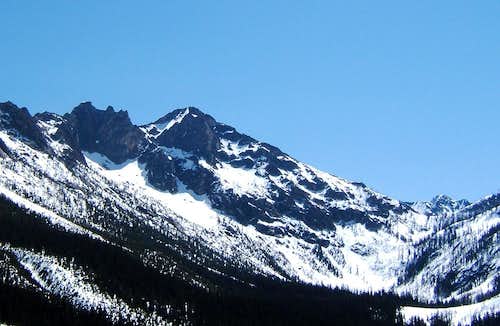 Wallaby Peak from the northwest.

Setting - from the SW.

Wallaby Peak is the accepted, but still unofficial name for Point 7995 on Kangaroo Ridge. It is located about 2 miles southeast of Washington Pass (Washington State Route 20) with its southwest ridge beginning at Kangaroo Pass. Unlike most of the other summits of Kangaroo Ridge that are rock towers and pinnacles requiring technical ascents, Wallaby is more massive and has a non-technical route to its summit. The first ascent of Wallaby was made by (who else?) Fred Beckey, Helmy Beckey, and Walt Varney on 17 June 1942. 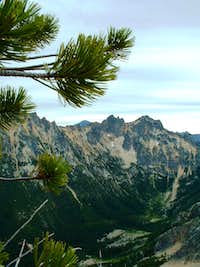 Wallaby and approach to Kangaroo Pass from the Liberty Bell Group

The shortest access is from the hairpin curve (large pullout – ample parking) to the east of Washington Pass. Access via other trails from the east or south would be unreasonably long. There is a trail leading south from the hairpin curve into the basin at the base of Wallaby’s north face and to Kangaroo Pass at the base of Wallaby’s southwest ridge. Going over the pass and around through the notch at the base of Kangaroo Temple would probably be the easiest access to Wallaby’s east face. The first part of the trail consists of a lot of following small cairns across talus and boulders, but higher in the basin it turns into an excellent trail that is easy to follow and as good as many official, maintained trails. To find the trail from the pullout, head toward the large talus slope just south of Spire Gulch. The trail skirts the bottom of this talus – watch for cairns and follow them carefully until you reach the upper part of the basin where the trail becomes very distinct. 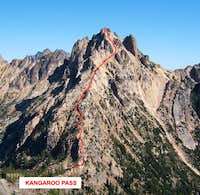 Guidebook: CASCADE ALPINE GUIDE, VOL 3: RAINY PASS TO FRASER RIVER: Climbing & High Routes, 2nd Edition by Fred Beckey. At: Amazon.com Southwest Ridge / Southwest Gully: Grade I, Class 2. From Kangaroo Pass, follow the southwest ridge to where it becomes obvious that you need to traverse to the southeast in order to stay on easy terrain. Traverse upward to the southwest gully that leads to the summit. There is nothing harder than Class 2 unless you decide to climb some Class 3 rock to avoid the loose talus and scree. This route might be best done in the spring with good snow conditions. (See trip reports under External Links) Beckey lists two other routes with somewhat vague descriptions, see the guidebook for details. North Face, Grade II, 5.9, 4 pitches. East Face Couloir, 40-degree snow and Class 4 & 5 rock.

There are official USFS fee campgrounds on both sides of Washington Pass. The nearest is Lone Fir to the east with Klipchuck and Early Winters a bit further east, but at lower elevations and thus open earlier in the season. Some folks "bivouac" at the Blue Lake Trailhead or even at the hairpin curve. Beckey and others discourage camping in the basin above the hairpin for obvious environmental reasons. Campground Information