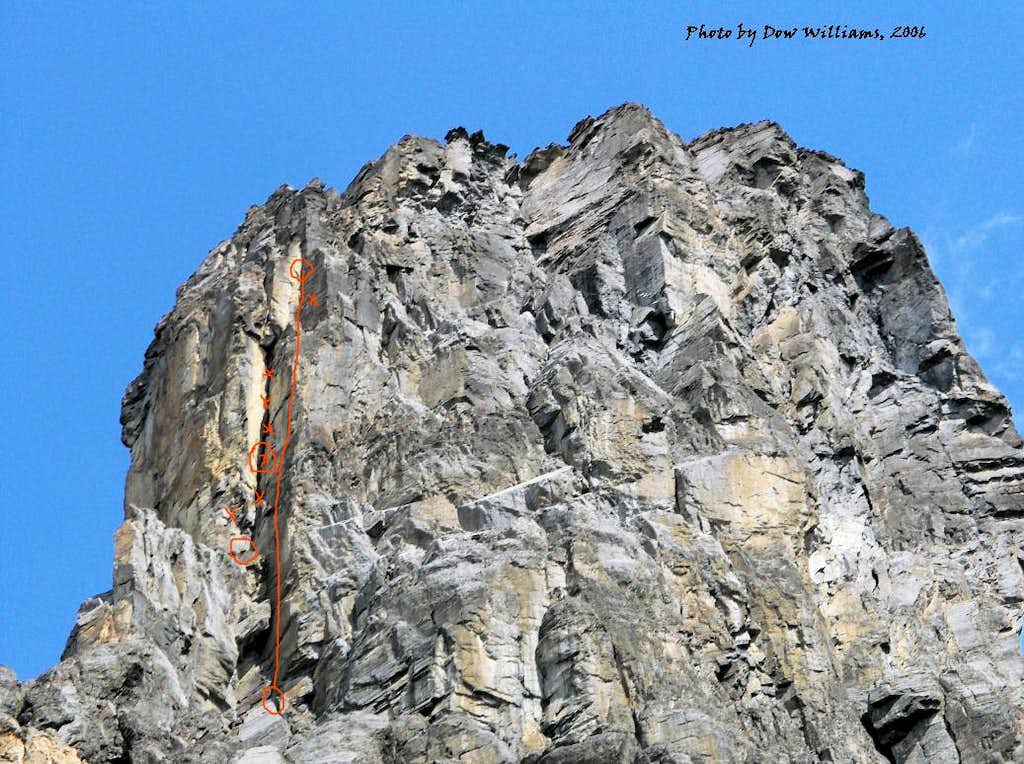 (top circle=where I came off the wall; next circle is piece that held, Metolius #7; third circle is belayer; fourth circle is where I arrested) I had 30 meters of rope out between the belayer and myself. I fell, ripping out a piece I knew full well would not hold, I was off route and it was run out into the 5.10 range when a clay foot feature on a mostly featureless wall gave way. I was over the roof of the 2nd pitch and the accelerated fall then ripped out a #8 Metolius (corner of one cam is sheared) that was definitely in the green zone in a significant crack and another piece or two down to a #7 cam that held. My total fall was 40 meters, I was arrested 10 meters from the base of the climb itself. I had fallen below the belay ledge. I can't recall with 100% certainty what I had in below the #8 Metolius. However, I am interested in the failure of this piece. When placing it, I was not positive what the route did after I finished the corner and turned the roof to the right. I placed it for a vertical fall. In reality, I moved into another corner to the right that would have placed me maybe 1.5 meters off center to the right of the corner and about 3-4 meters above the #8. That corner offered little if any protection and the 00 I did place had no expectations from me. I noticed that most of the rock on Watch Tower had a high concentration of clay. Scared as I was, in the end I was amazed at the system and how well it worked and how little injury I incurred. Of course I could have decked on the belay ledge, or chock stone in the chimney below it. Watch Tower, West Face, Alpine II, 5.7, Yoho National Park, Canadian Rockies, July 28, 2006.
« PREV NEXT »

Damn, that is a huge fall. Hope you're not really injured, which is a miracle considering the description!

Hey Peter, yes it was a miracle I missed everything, the advantage of climbing steep ground (as well as being a lucky bastard). I do have a bad case of Bursitis developing in my right elbow though (just too much damn climbing)hopefully get it drained tomorrow and be in shape for our rock climbing escapades....did The Tower today (what we tried to ski up) with Steve and Jackie....fun times

Just saw a cleaned up photo just like yours in climbing magazine issue #252 page 43. Not sure if that's how I would want to get publicity in Climbing magazine, but Congrats anyway. As if you didn't have a big enough fan club on summitpost already (me included). Cheers.

I was out climbing this afternoon while you were left "spraying" on the net....life is just

Chief, quit the charades...we all know you don't climb...you are sparying on SP everyday, mid day...its recorded for gods sake....you are only pissed off at me because I call you out for what you are, a huge "blowhard"...that is when you are not carrying out your CIA orders, shoveling snow or playing with your dog...I imagine you are a blowhard then too though...

sure...if "your friend" (how many personalities do you have Chief?) is a guide as you say, then he would know that climbing below a sizable roof would obstruct any vision of what is above. The serious move required to overcome the roof, via either side, was committal. Even then, I could not see into the right facing corner until I gained more ground and was now quite far removed of my last protectable opportunity in the crack below the roof...I should have turned the roof to the left..that is the route. I don't know anyone who climbs as much as I do who does not make route finding errors in the Canadian Rockies...probably why a disproportional share of climbers from your neck of the woods get in trouble up here. It is wild and wooly country.