I can see the peak of Gangshika from my office. Convienently, my office is in the grasslands of Haibei County, making the distance from the 3200m that I sleep at to the 5254m of Gangshika’s snowy peak relatively easy to cross. All we needed was a weekend with good weather, and bringing all this equipment we hauled up here would be worth while.

Day 1, 5 July: picked up by the not-very prompt driver at 6:30 am, and we were at the parking lot of the “Seven Colors Rainbow” by 7. This tourist attraction at 3800m is an algae-covered glacier toe sticking out of the base of the entrance valley to Gangshika. We started up, following the rocky path to a grassy meadow, and were at the start of the glacier by 9am. Crampons on, and we continued up. 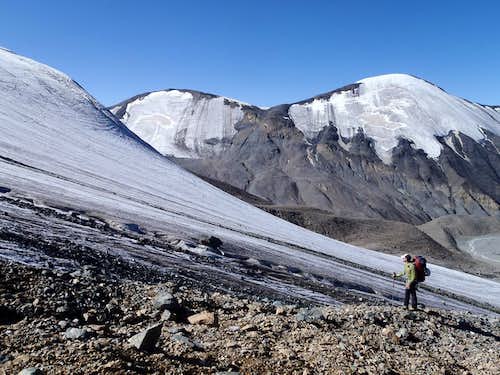 As we went up the gradual slope, easily walking around the wide-open and obvious crevasses, we started to see a strange sight: Red Bull cans… empty gas canisters… plastic wrapping from hot dogs… not unusual sights at any typical Chinese tourist site, but I never expected to see such litter on a snow mountain! 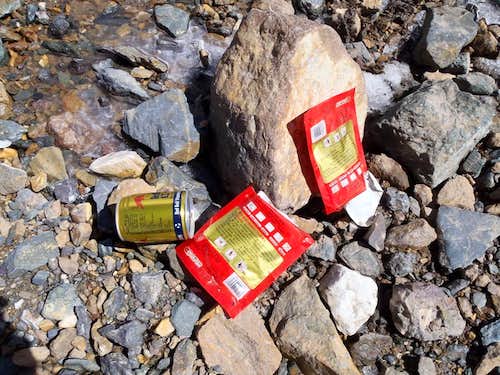 Trash on the approach

We continued up to the camp 1 (C1) spot we had seen on other trip reports on line, around 4600m. We were there, amazingly, before 10am. We thought it would take most of the day to hike up, but here we were… the sun was shining, and the mountian beckoned. Should we go up today? I felt ok, Dani felt ok… but we decided first to just make camp, and then decide.

By the time our tent was set up (with a rock wall around the base, to block the wind from blowing in under this ultralight, bottom-less tent), a light rain started and we decided to just rest. The day passed slowly. I was glad to have the time to acclimitize, as well as enjoy being up high.

The extra time also allowed us to clean up the trash heap that was C1. What kind of mountaineer brings all this crap up here, and then just throws it to ground? Batteries, many meters of rope, chopsticks, so many instant noodle packages, unused toilet paper, lighters, a steel carabiner, tons of bamboo stakes with red flags, tent stakes, and so much plastic. It was so disapointing to find a beautiful place covered in this crap. We packed as much as possible into a plastic bag, to haul down later.

We got going when the wind and rain eventually stopped, at 6am. By 7 we were walking, Dani up ahead and me meandering behind. The initial step to 4700m, immediately after the camp, we walked up easily unroped in 20 min. We roped up on the glacier above, walking on the hard snow to the base of the face. Only 500m of climbing separated us from the top.

We decided to initially start in a prominent rock band, and then move left to the snow after a few hundred meters. We had only a minimal rack: 2 ice screws, 4 nuts, 3 pitons, 1 60m rope, and each carried one ice axe and one walking stick. The initial slope of snow/ice looked steep enough that more screws would be needed to lead it safely. 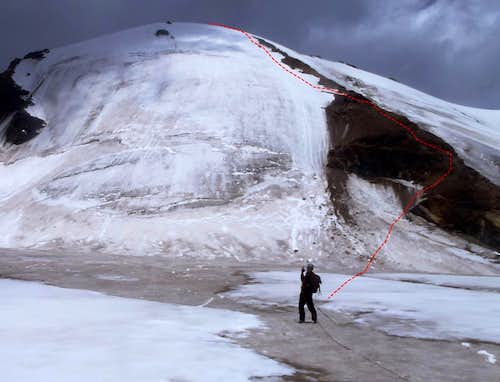 The rock turned out to be crumbling and insecure, but not very steep. We unroped for safety, since there was little opportunity to place rock protection anyways. We changed back to the snow and made our way slowly up above  4900, 5000m… and to the peak! We arrived around 10am, again only 3 hrs of effort for something we thought would take much longer. 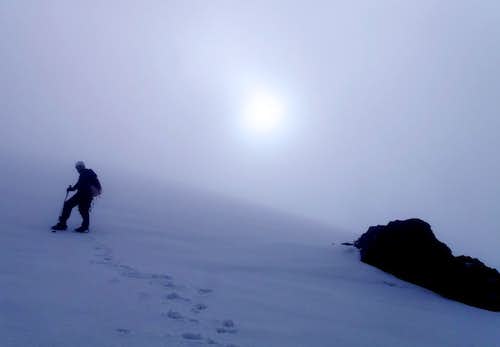 Seeing the sun for the first time on the way up 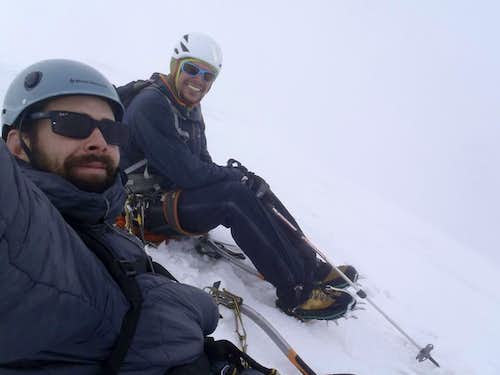 Summiting without the sun.

The clouds were thick around us. We had only seen the palest disk of sun all day, so D suggested waiting until the sun came out. After 20 min we had had enough waiting, and started on our descent plan: the unclimbed north ridge, which we had seen gradually descends to curve back to the glacier at 4700m, above C1. The other option was to downclimb and abseil the way we came, but was unappealing because of the tedium and risk of downclimbing near a crumbling rockband, where warming temperatures of the afternoon would soon be sending missles down at our heads. So the ridge it was.

The ensuing adventure involved easy walking with stunning scenery on the east side of the mountain, tricky scrambling across rock bands, one abseil off of a small rock tower, and traversing across some surprisingly steep snow/ice. With one ice axe each ("light is right"!), these traverses had a little extra excitement. But the snow was solid and it was easy to get solid foot and axe placements to the ice below, so even running out simulclimbs on our 60m rope with 2 screws felt quite secure. 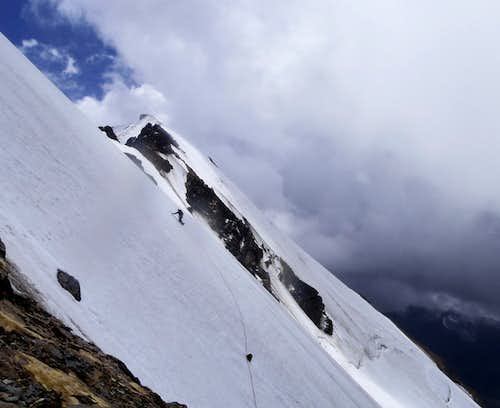 Eventually we reached a large rock band, and could see the foot of the glacier was now only about 100m below us. Dani downclimbed with a hip belay from me, placing both screws on the way down. I followed, and we made our only Abalakov of the climb to abseil over two large crevasses at the base. We left no material on the mountain, placing a few nuts, and mostly relying on our two screws and good axe placements.

We were down on the glacier by 2pm, and the clouds parted finally to give us a view of our new route. We stayed roped up for the walk back to C1, and were home as the clouds came back, bringing wind and biting hail.

We packed up camp very quickly. I packed the plastic bag of trash, maybe 5 kg, and we were on our way. We kept the helmets and sunglasses on to ward off the increasingly intense hail. On the way down we saw a team of 4 camped out lower down. After telling them about our climb, I requested their help in bringing down other trash from C1 (and elsewhere, if possible), and wished them luck.

We were down at the parking by 5:30pm. The times I mention because it seems obvious that some fast team will be able to climb this mountain car-to-car in under 12 hours, probably under 8 with a minimalist approach. However, such speed would take away from the enjoyment of this truly beautiful place! Gangshika deserves the respect of taking time to enjoy the altitude, the scenery, the adventure. Gangshika also deserves the respect of cleaning up after yourself. Please, all future mountaineers, please consider taking only pictures, and leaving only footprints.

seem to be thoughtless, over-consuming assholes no matter what country you visit.

"I like mankind. It's people I can't stand." - Charles Schultz

true, but I have hope at least that the small subset of people who climb mountains (here in China even) can be different.

Kudos to you for packing out the trash left by apparent scumbags. And congrats on a nice climb!

Kudos to you guys!

Environmental consciousness does not happen by itself, at least not for most people. What is needed is education in a friendly and respectful manner. I remember when there was trash on popular trails in the Sierras. Nowadays, you are hard pressed to find much. I think people are picking up after themselves and other people, with pride I might add.

Re: Kudos to you guys!

I'm not much of an activist normally, but I feel the community of mountaineers in China is small enough that this is possible to change -- they are rich enough to go climbing, and it may be possible to shame some people into changing their behavior.