The Wellsville Mountains are at the Northern end of the Wasatch Range of Utah lying between Brigham City and the Cache Valley. The Range is basically one high, steep, ridge the entire length. The ridge stays above 8,000 feet for nearly its entire length. They are extremely rugged and are considered by some to be the steepest mountain range in the United States. The range is very narrow, only about 5 miles wide at its widest point, and runs North-South for about 20 miles from the Bear River in the North to Highway 89 in Box Elder Canyon on the South. It also rises from about 4,500 ft. on either side (in less that 5 miles) to an elevation of 9,372 ft. at Box Elder Peak (Bob Stewart Peak on the USGS quad) and 9,356 ft. at Wellsville Cone. The range has no foothills so from either side it appears to be a giant mountainous wall rising directly from the valley floor. 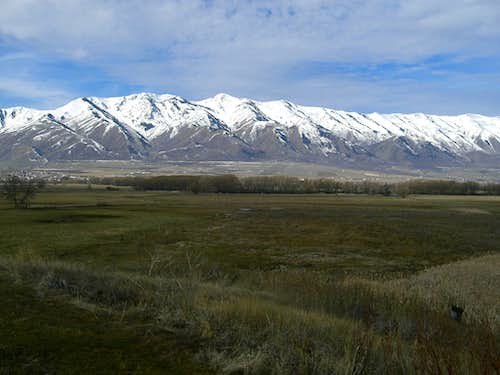 The East side of the Wellsvilles

The West side of the range is characterized by a drier climate and rockier terrain. It is quite similar to the Wasatch Front East of Perry, and Willard, Utah, near Ben Lomond Peak. The East Side rises from the floor of Cache Valley and is more heavily forested. Even though there are more trees on this side the range is still quite barren of trees as a whole.  The majority of the trees in this range are Big Tooth Maples, followed by pine at higher elevations, and a few aspen here and there. Because of the abundance of Maple trees the Wellsvilles are home to some of the most spectacular fall colors found in Northern Utah. 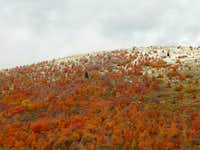 The Wellsvilles once suffered from overgrazing but have since rebounded and are currently home to large populations of deer, moose, and mountain lions. There has also been reports of bighorn sheep but this is doubtful.
In 1984 Congress set aside 23,750 acres as the Wellsville Mountain Wilderness Area and created the Mount Naomi Wilderness Area to the east of Cache Valley at the same time. The wilderness area protects the majority of the range and is popular for hikers, backcountry skiers, and bird watchers. It is never very crowded as it is not a well known wilderness area.  As it is in a major migration route of birds of prey there is also a bird watching group that maintians site near the top of the mountains. 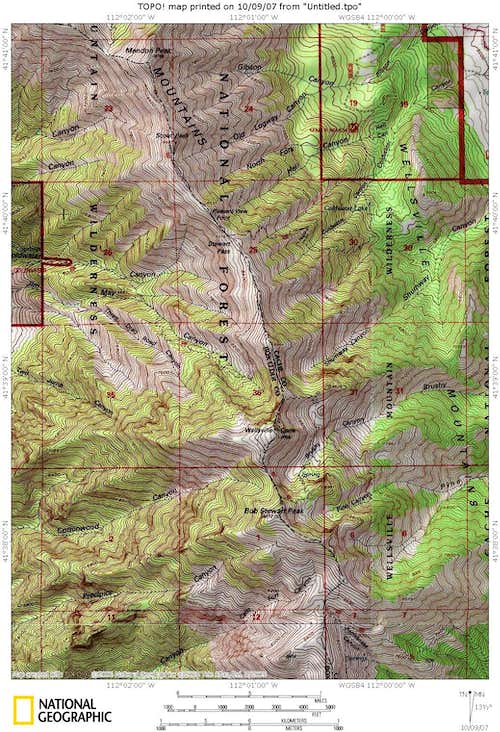 Most of the Peaks in the Wellsvilles are just points along the ridge without much relief between them. There are a few peaks that stand out though. Box Elder Peak and the Wellsville Cone are the most prominent.

Box Elder Peak is the highest point in the Wellsvilles. It sits just west of the Box Elder/Cache County line. It is best accessed from the Rattlesnake Canyon trailhead on highway 89 as it reaches the top of Wellsville Canyon. 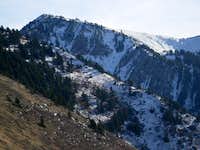 Wellsville cone from the north.

Only slightly shorter than Box Elder Peak, it sits just to the north of it and from Cache Valley appears to be taller. Access this mountain from the Rattlesnake Trailhead as well. 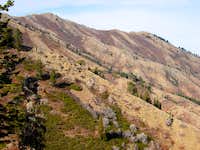 Mendon Peak is named for the small town that sits at its base. This is the northernmost major peak in the Wellsvilles and is at the extreme North end of the main ridge. It can be accessed from the Maple Bench trailhead or from the Deep Canyon trailhead. The climb is shorter but steeper from Maple Bench. 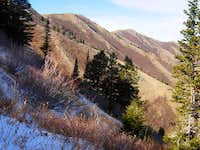 This peak sits just south of Mendon Peak and is not very prominent. It appears to be more of a point along the massive Wellsville ridge. It is nevertheless the 4th highest peak in the range. It is best accessed from the Maple Bench trailhead.

Highway 89 runs along the East and South sides of the Range from Logan to Brigham City. It enters Wellsville Canyon on the East side and runs South to Mantua, Utah, and then West through Box Elder Canyon to Brigham City. 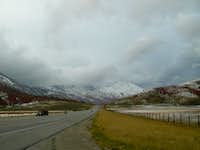 Most people mistake Wellsville Canyon for Sardine Canyon to the South.
There is limited access from the West of the range so the best way to get anywhere is from the Cache Valley side. I-15 runs along the Western side and there is only one trailhead in Coldwater Canyon, just East of Crystal Springs. There are 3 other trailheads located on the Southeast, East, and Northeast sides of the Range.

On the Southeast, Rattlesnake trailhead is just off highway 89 at the top of Wellsville Canyon. It provides the best access to Box Elder Peak and Wellsville Cone. Just South of Mendon, Utah, on the East side of the range, is the Maple Bench trailhead. It provies access to the main ridge at Stwart Pass (8,376 ft.), Scout Peak (8,687ft.), and Mendon Peak (8,766 ft.). On the Northeastern side of the Range (Just North of Mendon, Utah) is the Deep Canyon trailhead. It is the Northernmost trailhead and provides access to Deep Canyon, as well as the main ridge and Mendon Peak. It is probably the smoothest trail with the least abrubt elevation gain.

The majority of the range is a wilderness area so no motorized transportation is permitted. There is a limit of no more than 10 people for overnight backcountry groups. Camping is not permitted within 200 ft. of any body of water. It is also illegal to dispose of any garbage in the wilderness so if you pack it in you must pack it out. Camping for more than 3 nights in the same place is also not permitted. Basically, Leave No Trace principles must be followed.
The range is administered by the Wasatch-Cache national Forest.

There are a few sites with some information about the Wellsvilles on the web here they are:
GORP wilderness page
Trails.com
Wilderness.net 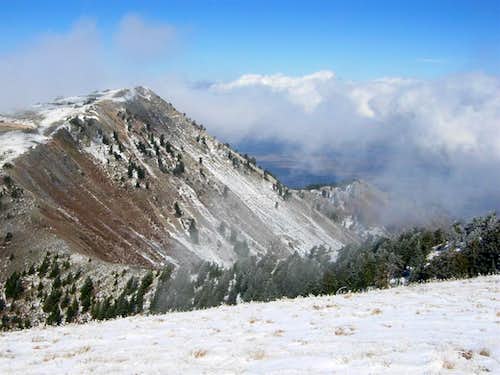 There are only 2 established campgrounds in the range. The Box Elder Campground is on the South end of the range and is just outside of the town of Mantua. The other campground is the Maple Rise Campground on the East side between Wellsville and Mendon.

Camping is permitted as long as you follow Leave No Trace principles.

There is one resort with a hotel and golf course located along Highway 89 at the top of Wellsville Canyon. It is called Sherwood Hills and is actually a VERY nice place to stay. 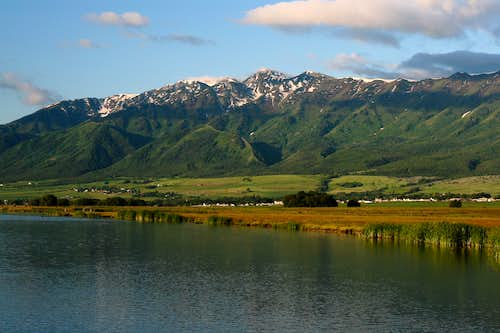