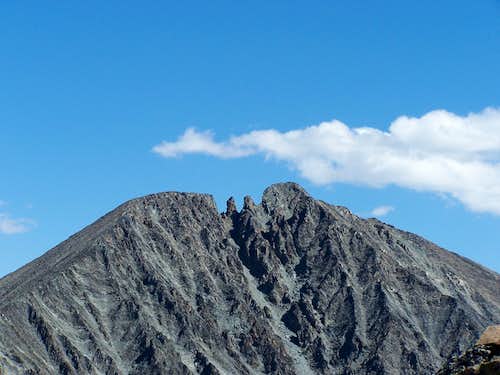 Good view of the upper mountain from the SW.  The upper W Ridge and the false summit are on the L.  Negotiating the notch between the summits is the crux of the route.
Enlarge for greater detail  you can even see climbers on the false summit 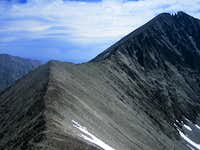 W Ridge no snow
The West Ridge seems to be the most popular route on Crazy Peak. Most climbers approach the ridge from the area of Blue Lake.

Access to the ridge crest can be made at several places depending on conditions and climber preference.

In the early season when there is adequate snow cover access can be gained by virtually any of the shallow couloirs on the NW face depending on snow and avalanche conditions as well as climber preference.

Later in the season when the snow is gone access to the ridge crest can be a problem because of loose rock and talus if a good route is not chosen. 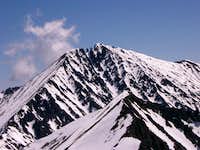 Once on the crest of the ridge, the climbing is straight forward Class 2 with perhaps a bit of Class 3 (depending on exactly where the ridge crest is reached) to the false summit.  Negotiating the notch between the summits requires some definite Class 3 scrambling and / or steep snow.

Distance from the trail head to Blue Lake – about 4 miles with 1,738 feet of elevation difference and a bit of up and down on the trail.

Distance from Blue Lake to the summit – about 2 miles with 2,991 feet of elevation difference but with some up and down at the notch between the false and true summits.

Most parties will approach the route from the area of Blue Lake.  See the main page for trail information.

The ridge can be accessed via either of two cirques on the north side of the mountain.  The shortest route is via the cirque at the base of the NW face.


The next cirque to the west provides access in the vicinity of point 10,574 for those who want to climb more of the ridge.  I don't know if this route avoids loose rock or not.  See the attached trip report:  2nd Attempt at Crazy Peak.  Note that the author reports a short "technical section" Class 3 very low on the ridge if this approach is used. 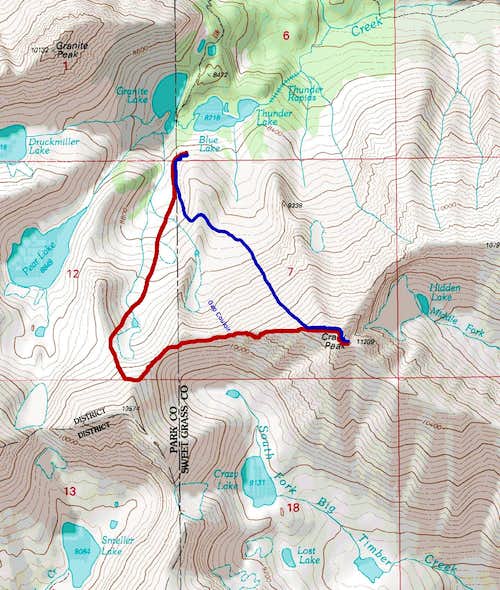 Longer approach (red up, blue down) - graphics by peakhugger 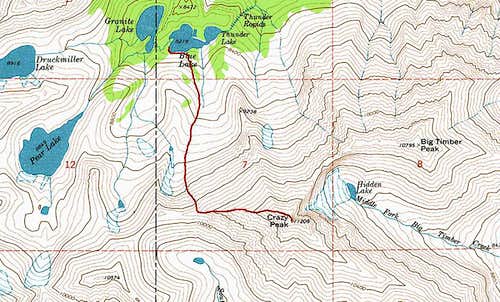 Whether in early season with snow or late season without snow, the crux of the route is negotiating the notch between the false and true summits.  The key to getting into the notch is a very narrow chimney almost at the top of the false summit.  Descend the chimney to its bottom (about 85 feet) and from there  traverse skiers left across the base of the first tower in the notch and take an exposed (but relatively wide) ledge around the second tower.  Once across the ledge descend a short distance further around and then climb to the notch between it and the summit block and find an easy route up to the top.

The following descriptions are for full snow and no snow conditions - for part of the season there will be no snow for the approach to the ridge crest, but potentially snow in the area of the notch.

In spring and early summer, it is possible to access this ridge from a number of snow filled gullies. There is no well defined best route, many possibilities exist. Once on the west ridge, the climbing is easy on the left side to the west summit. From here you must downclimb into the notch at the top of the Crazy Couloir. A narrow chimney gets you into the notch, then find your way around the ribs and up to the summit. Depending on snow, and route finding, this section is difficult to predict. We climbed into the big, steep couloir because the snow was good, but that may not always be the case.

In the mid to late summer and fall when there is no snow the problem of dealing with loose talus becomes an issue in route choice.  When Moni and I arrived at Blue Lake, we met a party that had failed in their attempt on the peak the day before because of the loose rock on the approach to the ridge that they chose.

We approached the NW face and studied the couloirs carefully looking for a route that offered a short climb to the ridge crest and with a minimum of loose talus.  I think that this is the shortest easiest route to the ridge crest from this cirque.  See the first two photos below.

Good boots or shoes in summer, some method of snow travel in winter or early spring. An ice axe and crampons could be handy in some conditions, depending on your comfort level on snow.