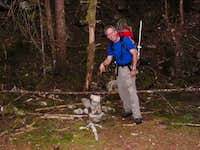 We have been planning this trip for a year and we nearly missed out. Vacation requests made long in advance can't predict weather, so when our vacation came around... the only week of rain since early June... prevented our initial trip.

We later begged for time off from the MAN and off we went for McMillan Spire still with questionable weather. We got our permits at Marblemount and started our trek under heavy overcast skies with no views. For first-timers in here, the directions for the trail start could be improved: There are two "group" camps for Goodell. Go to the east side of Goodell Creek across from the "Vistor Center" sign just west of Newhalem, not the Goodell campground sign which is on the west side of the creek/river. The road on the east side is initially paved (not gravel as my copy of Selected Climbs says), go north 200 feet then left (west)to gravel past Transportation facility and small gravel pit, follow signs to "group camping" on the uphill branch of gravel road. The ranger told us to park at the small spur before you get to the campground that will avoid conflicts with campers. Ask the rangers. We were off somewhere around 9:00 AM with 4 plus miles on the old road bed to the famous rock arrow pointing up the climber's trail. Up from here should be emphasized. The path is well defined...most of the time. Blow downs and minimal traffic caused us to guess a couple of time, but always able to reestablish the path up. It took us about 8 hours to Terror Basin. We are never fast, seldom within the alloted time, but who cares? We got there just fine, mostly concerned about the weather. We never got any views on the way in, kind of bummed for the energy invested to this point. However,we did find tons of Blue and Salmon color Blueberries and Huckleberries...sort of made the trip worthwhile??? And, we found the evidence of Bears eating the same. I'll include the telltale evidence (no Bear sightings). Car: 600 feet. Arrow pointing up: 1600 feet. Notch above Terror Basin: 6350 feet. Terror Basin: 5,700 feet. From the "notch" down to Terror Basin is steep and loose. Camping here is great, but this is where we could enter the Album for "Stupid Things You Forgot". We are getting lighter as the years go by and our age, so we carried light bivy bags, small packs, small fuel bottle, etc. But the mix up in equipment assignments we left the pump for the MSR stove! Could not believe it. Three climber came in just after us, but they had no stove either. We managed on crackers, jerky, snacks for three days. Plenty of water here. We went to bed under heavy clouds and some drizzle during the night. 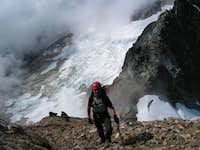 Still cloudy, but some openings that gave us hope, off we went. We follow "Selected Climbs" routing across heather/rock benches slightly traversing down hill to the outlet of the glacier fed lake. Some lifting of clouds kept us on route, but we could never get a good line on the mountain itself until later reaching the Northeast edge of the Terror Glacier. Weather got better just when we needed our bearings confirmed. We climbed up the steep snow finger to the West Ridge at the col between Inspiration Peak and West McMillian Spire wearing crampons, but saw no need for ropes. We did read a trip report that one climber got on to the West Ridge before the top of the snow finger. We all agreed there are multiple options where you get onto the Ridge, but the snow finger did it for us. From here, the weather opened up beautifully. We picked our way up the ridge that is very loose, being super careful not to dislodge rocks onto the three climbers below us. The summit was spectacular! We could see south to Glacier Peak, clouds coming and going, occasional views of Mt. Baker and of course the North and South Pickets! We commented how incredible the climbing reports of these peaks now mean to us seeing the faces and buttresses. Nick and I signed the summit register and were shortly joined by Eric, Owen and Brian from Lynden, WA. Pictures, then down. We descended together to minimize rock fall hazard. Very nice group to climb with. The trip back to camp went well, no problems. The three in the other party needed to be back to work Sunday, so they packed up at 5:00PM and made the long march out figuring a midnight arrival at the car. We wondered how they did route finding down the trail at night. I hope they post a note on this. This was really a great summit day! I am so upbeat about this trip, glad we were able to find another time slot to succeed after bad weather earlier in August. Nick and I have really had some great climbs together. This was no different. Incredible.

Note on trip out

Norman - Great trip report and a pleasure to meet and climb with you. Our party of 3 started back from Terror Basin at 530pm and had to use headlamps around 830pm with about 500vf left of the steep trail. We got back to our car at 1120pm with only minor route finding issues (maybe cost us 10-20 minutes total) in the dark. All route finding difficulties were at the major washouts along the old road.

Re: Note on trip out

Eric:
Glad to hear it went ok for you guys. We talked about your trip out and how exhausting it must have been. Darkness can really make trails hard to find. Good climbing with you too. Have a good Fall.