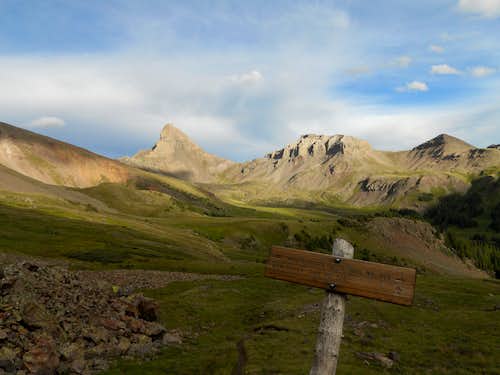 In August 2011, I had the opportunity to make the drive from the Wasatch Front to our home in Albuquerque solo, without kids and without time restraints--so I opted to take the longer, more scenic route through Grand Junction and on south by way of the Million Dollar Highway. This longer route gave me a taste of the San Juans and convinced me that more time was needed to explore them. Flash forward to August 2012, I made plans to meet up with my buddy, Will, from Utah with whom I had hiked Kings Peak (UT) and Mt. Elbert (CO) over the past few years. We decided to hike Wetterhorn, but because we also wanted to climb Mt. Sneffels, we decided to backpack in from the northwest. This would give us an opportunity to see a side of Wetterhorn not seen from the standard route to the south. What I didn't realize ahead of time was just how amazing the surrounding terrain was and how much solitude you can find even near a popular 14er.

After meeting up at the Subway in Ridgeway, Colorado, we drove up into the beautiful Cimmarron Range towards Owl Creek Pass. Right after reaching the Pass, we turned right and headed south up the West Fork of the Cimarron basin and our trailhead. 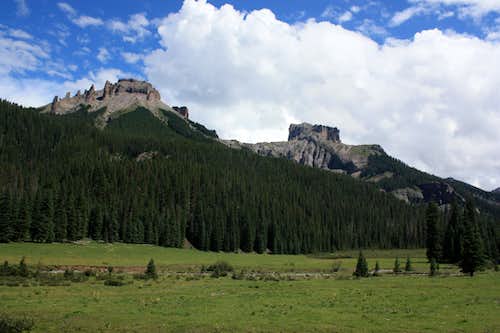 Great scenery even before beginning the hike. 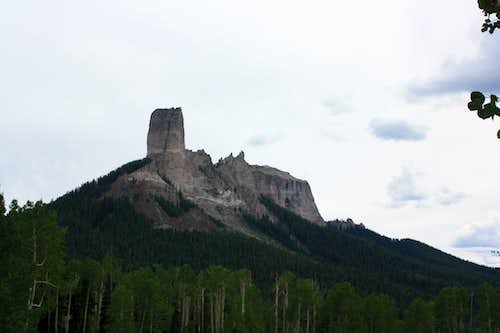 On the drive up to the trailhead, we passed this landmark from "True Grit" fame (the original John Wayne version)

The last mile or so to the 4-wheel drive trailhead was a bit extreme for my Kia Sportage. It included one river crossing and lots of ruts and rocks. The scenery was great. I would like to return someday just to car camp with the family and explore this area more. The weather alternated between gray skies and sunshine. We got to the upper trailhead around 3 p.m. and made ready for the hike in.

Other than a short backpacking trip a few weeks earlier in the Pecos Wilderness of New Mexico, I hadn't done much hiking of any kind over the last year. I spent the first few miles of the hike just trying to keep pace with Will, who is a few years younger and in better shape. Just before getting to the start of steep terrain, thunder rolled in and we hunkered down and waited for a break in the weather. 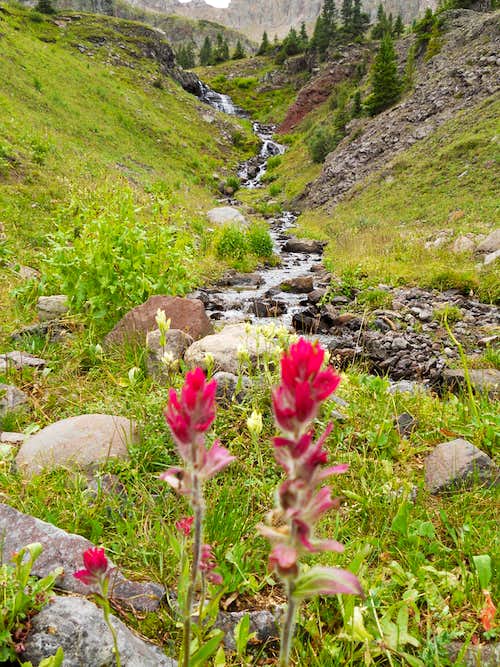 On hike to Wetterhorn Basin. Although we missed the peak wildflower season, there was still some nice color around. 8/2/12
Once the weather cleared, we headed up a now steep trail towards the first mountain pass of our trip. The views back down the valley to the north were awesome, with Chimney Rock and Courthouse Mountain. Redcliff (13,642') and Coxcomb Peak (13,656') dominated the view to the east. The trail ascended to the pass which, at over 12,500 ft, is really a saddle of Comcomb Peak. Although just three miles or so into the hike, I was fairly winded by this point. 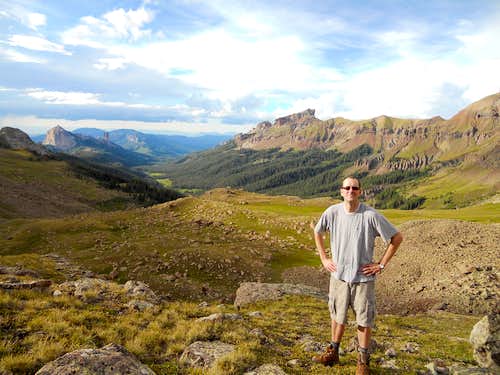 Dandrew at the pass before descending into Wetterhorn Basin to make camp. 8/2/12
After a brief rest, we began the descent into Wetterhorn Basin. Just below the pass, two guys had set up camp and we chatted about our plans. They were the only people we had seen thus far or would see until the next day after meeting up with the standard route on Wettehorn's southeast face. I get the impression that, aside from the normal routes up Wetterhorn and Uncompahgre, its fairly easy to find solitude in this wilderness area.
About a quarter mile and 500 vertical feet down the trail, we reached a junction of the Wetterhorn Basin Trial and Cow Creek Trail (pictured above). Here, the view to the southeast opened up and we were treated with our first view of Wetterhorn's impressive northwest face. The trailed stayed relatively level through tundra and some marshy areas before crossing a branch of Wetterhorn Creek. Not far beyond, on some high ground at treeline, we decided to make camp. The view from our site was priceless and as the sun went down, we got to see the mountain under a variety of lighting conditions. Just after dusk, a full moon arose nearly directly above the mountain and we saw a couple shooting stars. 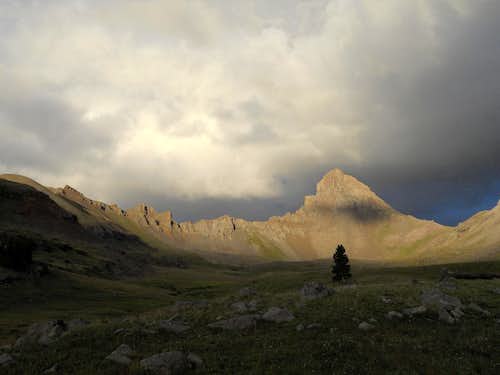 Another view from our campsite 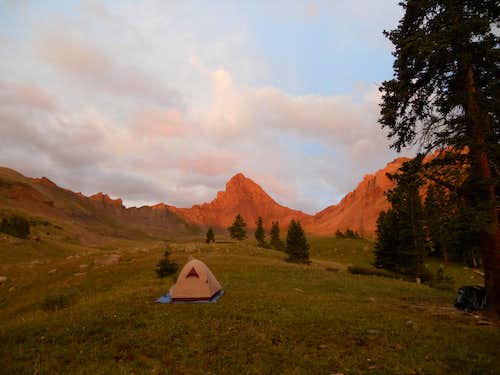 View from our campsite
As usual when camping, I did not sleep well. To make matters worse, the freeze dried lasagna I had for dinner was not sitting well with me. Nonetheless, when dawn approached, we got up and got ready to go, taking with us only the essentials. It's only a mile and a half, perhaps two, to the pass (Wetterhorn's SW saddle), but I again fell behind Will and struggled to make it up. 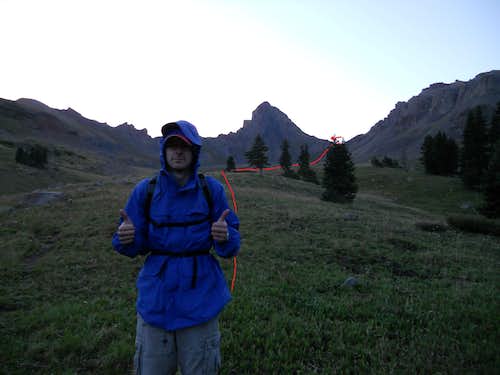 Day 2: route to the summit

From there, we made the traverse over to Wetterhorn's SE ridge to intersect the main trail. We mistakenly descended a bit too much (my fault) and had to waste energy ascending grass and scree to the yellow dirt section of the trail where the main route's climbing begins. 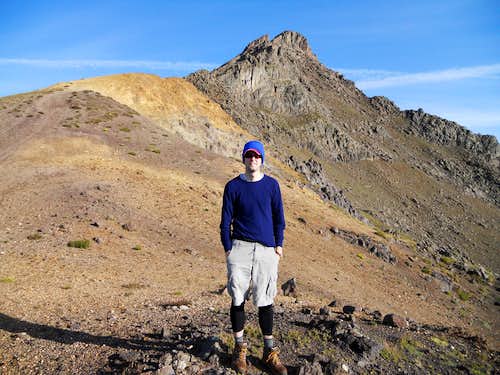 Getting ready for the fun part. Dead tired at this point.
Here, we finally met up with other hikers on their way to the summit. Will quickly got ahead as I slowly plodded up. My stomach began to hurt like crazy and I felt the need to vomit, so I stopped for a long while and considered whether I should continue. I'm not sure whether it was the previous night's dinner, dehydration, altitude sickness, old age (32) or perhaps a combination of those. By that point, I was probably only 300-400 vertical feet below the summit. Several climbers came by and offered assistance and words of encouragement. After about 40 minutes, I finally felt a bit better and started on up again. 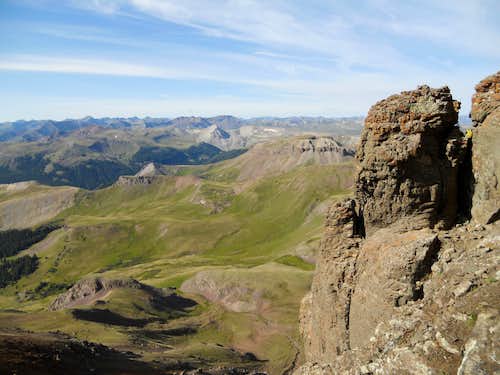 Nearing the summit on Wetterhorn, CO. I had to stop here for a while due to stomach issues.
Here the climbing became fun. It seemed to me, at least up until the Prow, that there were always multiple ways to go up. Having to use my hands seemed to help my stomach issues. 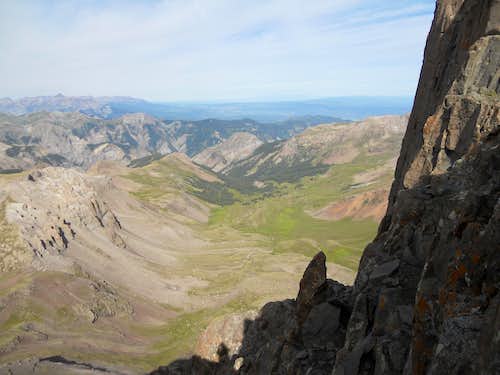 Wetterhorn Basin to the northwest of the peak. Our campsite, from where we headed out that morning, is somewhere down there near treeline. 8/3/12 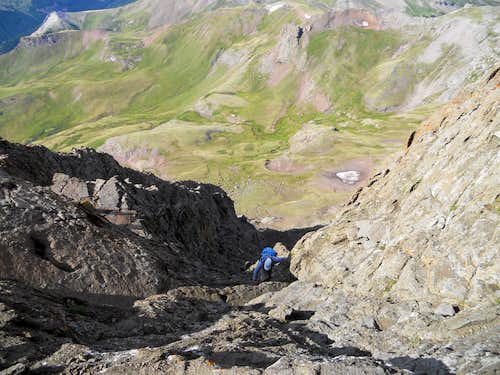 Nice lady from California making her way up the final summit pitch of Wetterhorn. The exposure is real but the rock is solid and the climbing is fairly easy. 8/3/12
I found the final pitch to be fairly straightforward. There were a few folks who made me nervous, especially when they were climbing above me, but otherwise it was a good time. Near the top I found Will heading down to look for me. Since he had taken our lone pack, I was happy to be reunited with my gatorade and snacks. 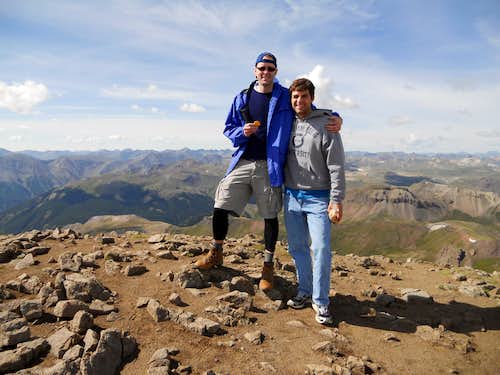 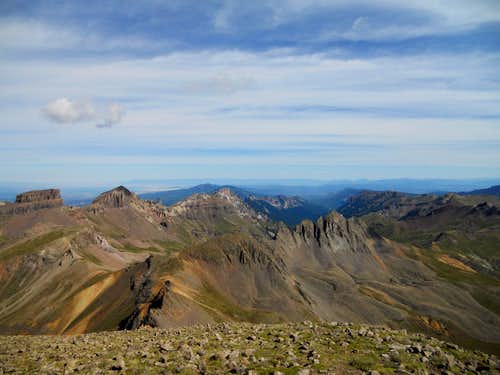 From Wetterhorn summit, looking northward towards Coxcomb and Redcliff. Our hike began out of the photo to the left at the West Fork Cimarron trailhead. 8/3/12 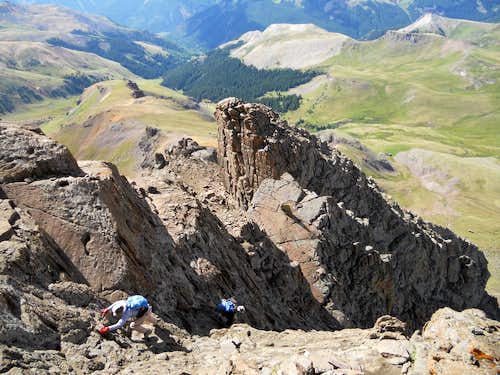 A view of the normal trailhead and SE ridge route from near the summit.
We had great weather without any threat of storms. We stayed on top for probably a half hour before heading down. While Will always burns me uphill, for some reason I always leave him behind while heading down. We made good time back to the yellow dirt section and then traversing the mountain to the SW saddle. We stayed high on the return to avoid having an unnecessary inclines. Back at camp, we rested for a while, packed up our gear and headed out, with Will giving me a good headstart. Although we were both anxious to get back to the car, and were walking fairly fast, the miles seemed to drag a bit. The beautiful scenery helped. 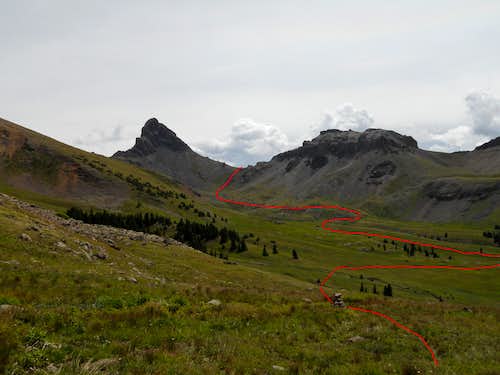 This was our last view of Wetterhorn on the hike out with redline showing the route from the peak.
Back at the car, we made the long drive back into town, stopping at Subway again to eat and use the restroom. We then headed into Ouray and up the road towards Yankee Boy Basin to find a place to camp. The campgrounds were full, but luckily the hostess at Thistledown Campground let us camp in an unmarked site right next to the river. Mt. Sneffels was up next.

Good choice on the route! If I ever climb Wetterhorn it will be from the Basin. I hope to do this as a 2 nighter someday...it is on my San Juans to do list. Congrats on summitting, and thanks for posting. Mark

Thanks for your comments, Mark. I highly recommend this route.

I think your approach is more scenic - the views around the west fork are amazing, next time you can try middle fork:) also very nice approach and even longer...
Thanks for posting.

Thanks, Liba. I've seen some pics from middle fork. I'd love to give it a go someday.