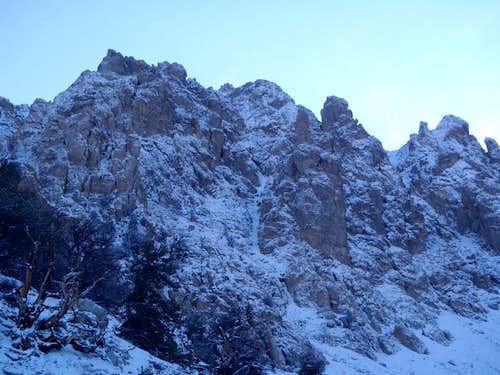 The southwestern side of Peak 11,308 is home to a cirque of rock towers and gorgeous views. Between many of these towers, one couloir stands alone. It is visible from the highway and is possibly the most fun way to climb this peak.

Do not be fooled, there is another peak 11,308 (Hidden Peak) in the Lost River Range. The White Line Couloir shares its summit with Mount Morrison and sits 2.3 miles to the southwest of the summit of Borah Peak.

This climb is not outrageously impressive, however it is fun, and Dean Lords considered it to be "a great way to learn how to climb mixed routes". Because of its close proximity to the road and car, White Line isn't a committing route and one can bail at any time. There is, however the fun point of "it’s better to go up than down" as you approach the top pitches. The walk off is much faster than rappelling the route. 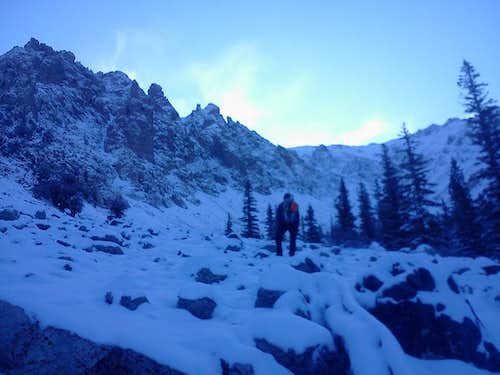 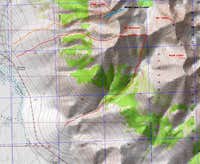 From Arco, Idaho drive north on Hwy 93 past Mackey Reservoir. Just south of Mile Marker 127, you will see a (faint) gravel road. It's marked by a brown sign of "39-9" (I think). Move the fence gate and close it when you're done. Drive east as far as your rig will take you. Most 2WD’s should park just below the power lines; others could push higher saving a few hundred feet of walking. You should find a new fence to the south and follow it as you walk east up into the range. Eventually you will need to drop down into a big drainage and up the ridge on the other side. Continue uphill until you enter the alpine cirque. 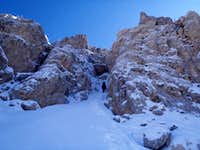 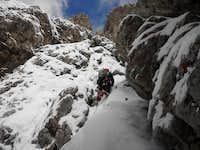 The White Line Couloir is obvious by it's prominent chock stone start. The Couloir has a steep apron of an approach, leading right to the 5.6 chock stone. For those wanting to avoid the tricky climbing, you may want to climb up left and out of the couloir earlier. This is one of two cruxes on the route. It protects well with nuts and pitons. Pitch 2 is a steep snow hike, conditions may make it nice styrofoam, or a murderous post hole fest. Pitch 3 has a little body length kick point and more hiking, or traverse far left for a new adventure. Pitch 4 is another serious pitch where the M5 rating comes from. It's steep, easy to protect, and dry tool placements keep you on your toes. Pitch 5 turns north and becomes a tight, steep slot canyon, with small chocks and one more crux similar to Pitch 1. The last pitch is #6 which requires more steep hiking up to a window rock. From there you must rap off the back down into a different gully system. Once down into the gully, continue up to the summit, or glissade down to get back to the car.

It is tempting to take a lot of gear, but all you really need is one rack of nuts, 10 slings, 3 pitons, and if there is ice, 3 short screws should be more than enough. If you need to rap off the route, extra webbing is a plus.

Dean Lords has paid the price of admission for you. Over the course of several years he studied the line and he said the best conditions are found after a winter with above average snowfall followed by a cold, wet spring. It's also possible this route could form in the winter during certain periods following a freeze/thaw cycle. Avalanches are always a concern, but not as big of a deal while on this route. The gullies to the north and south of the route are bigger slide zones, so be aware.

As of the time of this writing there have been fewer than a dozen ascents of this route. Some folks that have climbed this route are Dean Lords, Travis Michaelis, Abe Dickerson (2004 AAJ), Mike Howard, Jake Manning, Jason Gee, Tyler Wheeler, Joe Crane, Kevin Hansen, Aaron Zabriskie, and Scott Hurst. If you have climbed the route, please sign the log.

None at all but in this range it's a good idea to let someone know exactly where you are going.

Links to the Mackay and Challis web sites.