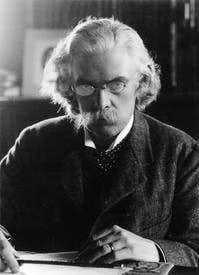 But looks a bit like him- right era too.
19th -early 20th century Swedish mathematician
(complex function theory) Gösta Mittag-Leffler
He is one of 675 or so persons featured in Who was (S)he?. A game on PnP moderated wherein the proposer decides on a personage (real, literary or from low culture) places photos of related locales and related persons in an effort to elicit the right guess or solution from other players. The solver is then supposed to propose a new "who" etc.