Why the Orco Trad Meet? Alternatives to the full equipped climbing-style

Since a few years, except for hard and enterprising high mountain alpinism, really less and less played, in many European countries (Latin Countries mainly, but also Switzerland and Germany) a climbing practice more and more supported by artificial means had been becoming the winning practice. Such a climbing style, born into indoor climbing stadiums, was transferred to natural climbing walls, in medium mountain, but also in the high mountain ranges.

Our modern society shows a prevailing propensity of “securisying” all, even the climb, as well as every other social expression; in such a manner, freedom, fantasy, autonomy and personal responsibility are no longer basic rules. Starting from the family imprinting, then the school standard education and job rules, people are on the way to lose their autonomy to think, to project, to create and so, with a unique word, also to dream. Because of such a winning model of life, a lot of climbing lines highly protected with technological means had been realized. The route reflects the character of the first climber, who creates the route he needs: fearful climbers create routes with a lot of bolts, strong climbers use a few ones. First ascensionists really “make-up” a kind of full equipped product, and most of the climbers find convenient “using” it, rather than engaging themselves on not-equipped routes; slowly they are losing the ability to imagine, create and realize something new. This climbing-way dominates the European panorama in different alpine and latin countries.

Of course some important exceptions exist, regarding single persons who escape this mass inclination and accomplish meaningful exploits inside the kind of adventurous and very high difficulty mountaineering, as luckily nowaday exist some areas inside the Alps, as the Dolomites, where trad climbing is still strongly deep-seated. Yet the outstanding cultural model is that of full equipped routes, to climb which good muscles and some quickdraws are enough. 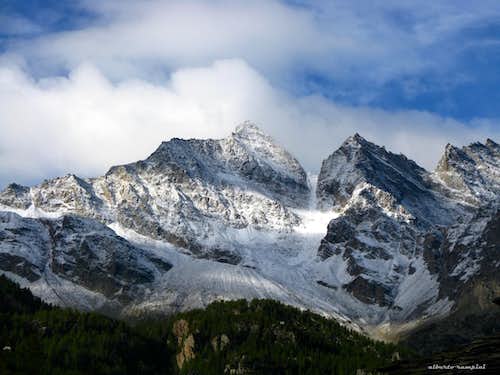 A glance over upper Orco Valley

The C.A.A.I. – Club Alpino Accademico Italiano - since its establishment had always believed that trad climb is the most pure expression of mountaineering’s historical values and that the greatest difficulties can be reached only respecting a thrifty use of artificial means and avoiding to use those to supply the loss of technical ability and courage. A struggle “by fair means” as it is nowaday possible, therefore without refusing at all technological news, but avoiding, at the same time, to overwhelm the mountain and its difficulties. Otherwise, what did it mean the struggle? And what a satisfaction in our victory (quite expected since the beginning)?

In the year 2010 C.A.A.I. thought that time of discussion was over and time of action was at the same time possible and necessary. And really, something new was happening in our country: some single routes and some crags started to be climbed in “trad” style or “clean” style, a spontaneous movement involving a new interest in natural climb. Obviously, rock cliffs and walls rich in cracks of good rock are the best ground to develop this kind of climb, and we thought that the high class granite-gneiss of VALLE DELL’ORCO, Piedmont-Italy (50 Km from Turin) well symbolizes the ideal play-ground. 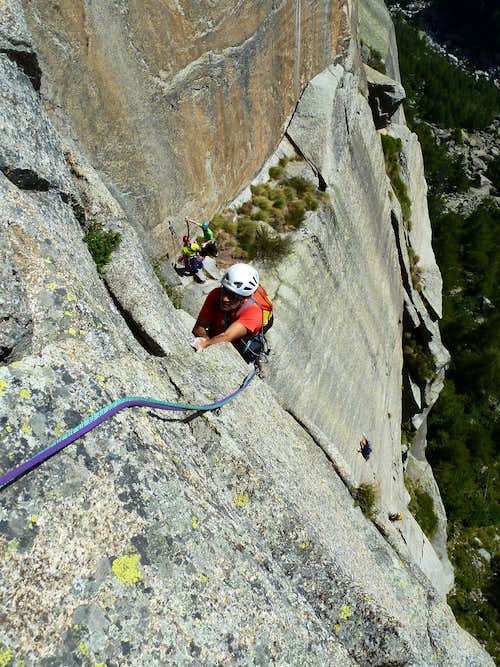 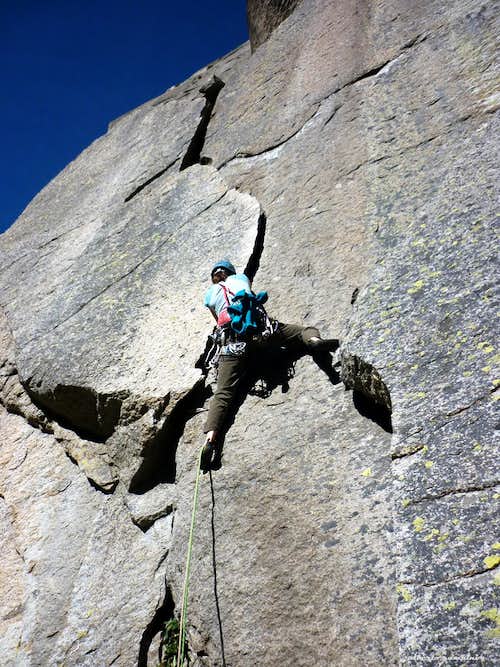 Very hard boulder problems, single-pitch and multi pitch climbs till 400 meters long inside an alpine landscape, a good climate and no problems with local people allow Valle dell’Orco to be a “paradise” for “clean” climbers. The week from 17 to 23 september 2012 has been a full immersion period for about 40 climbers coming from 15 countries (UK, Norway, Demark, Switzerland, USA, Israel, Slovenia, Belgium, Portugal, Czech Republic, Greece, Poland, Germany, South-Africa and obviously Italy). Well, just a week of great climb for young and less young climbers inside an atmosphere of enthusiasm, culminating saturday night in the final concert by the “Back to the Origin”! Some hard climbing problems were solved and many routes climbed along the valley (some new ones), according to the high level of our guests. 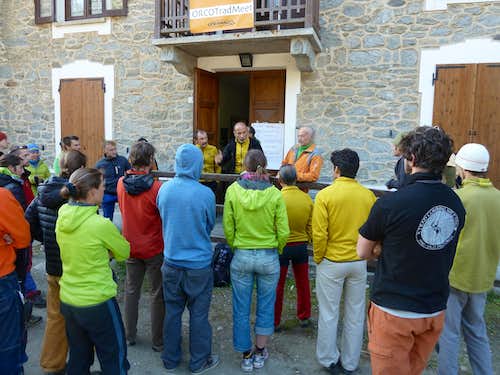 Every day, coming back from cliffs, people met and discussed about the news and we were confirmed in the idea that a new style of climbing have to be strongly introduced in our country as an important alternative to the technological climb on bolted routes, now almost universally played, mainly by younger people. In such a way, mountaineering and climbing will be again strong means to increase awareness, ability and responsibility. 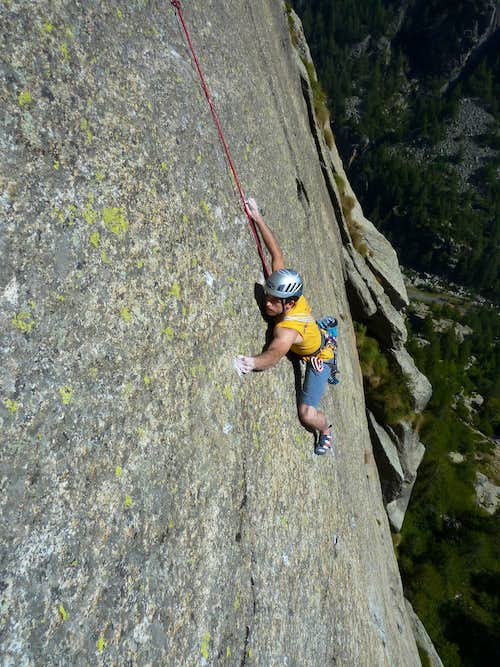 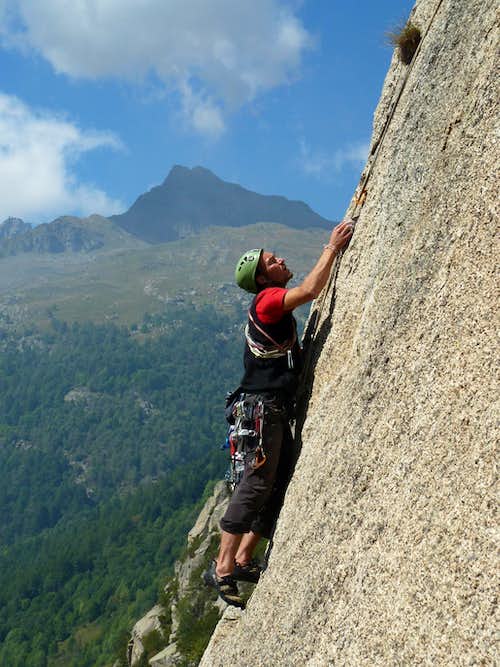 thank you for posting up the amazing photos & the TR. Great stuff!!

Many thanks,
you really have incredible action photos, i had a a look at your gallery...breathtaking!
cheers
alberto

thank you for the nice words Alberto. Cheers.

it is to see this point of view expressed here. My friends and I started climbing just when the "clean" era began in the early 70s and we took great pains (and often risks) to practice "no trace" climbing with the use of mainly nuts and stoppers. With few exceptions, all of our routes were done bottom up on a lead. If we top-roped, rested on gear, or used it for foward progress it was considered cheating and the route would always carry the stigma of this kind of effort. Style and ethics were equally as important as the overall difficulty with no exceptions. We by-passed many a nice looking route just because there was no practical way to protect them without using bolts or fixed pro. We also felt that in the future more sklilled climbers with better gear might come along and figure out the problems that we left untouched. That did happen but certainly not in the way that we expected. Along with sport climbing came a whole new generation with a different values and that was anything goes. Bolts, chain anchors, pitch-by-pitch topos, portable drills, you name it, it's all fair game now. At first I hated this change and was ready to go start chopping bolts at our local crags but soon realized that "this is just how things are now and no one else gives a rip. You're just an old man and people would trundle on my head if I tried to erase the garbage they leave behind."

Many thanks also to you for your contribute.
I agree with you; shortening the time of history by increasing more and more technical means cannot be approved: it’s a robbery of our future.
All the best!
alberto

I started climbing a few years ago, and because of where i lived(Yellowstone), trad climbing routes were all i had avaliable. I recently moved to Bozeman Montana for college, and was struck by the realization that most people of my generation climb either bolted "sport" routes or at indoor gyms. While i do enjoy this type of climbing from time to time, i am disappointed that trad climbing has fallen out of favor. Although bolts/chains allow for one to climb harder routes more safely(or at least more confidently), trad climbing is much more fulfilling in my opinion. I really enjoyed your excellent article!

Yes, that is the situation!
Our efforts are oriented in raise awareness about trad climb, its ethical value and personal satisfaction, without demonizing sport climb: either can co-live with respect of their different rules.
Thanks for your comment!
cheers.
alberto

Fortunately, as I remembered, also in Europe, in some places, such as in the Dolomites, Orco and Mello, trad climb is nowadays a well established tradition…
Thanks for your comment.
ciao
alberto

When I was first getting into mountaineering I had read too many older books and didn't understand what climbing had become in the past 20 or 30 years. The idea of a first ascent being preceded by a long series of rappels for cleaning and bolt drilling seemed counter-intuitive at best, and more often simply absurd. Especially as a new-comer to technical climbing, it's great to see these ideals being revived and updated.

Hi Jacob,
really these ideals are the "core" of alpinism, i think...
Otherwise we can talk about sport, but not about alpinism!
Thanks for your kind comment.
cheers.
alberto

I loved all of it, Alberto, well done!

Kind words, Sarah. Happy you like that.
This valley is a little Yosemite, surrounded by high mountains as Gran Paradiso! Nice!
ciao
alberto

The challenge is still there

Hi Alberto, wonderful article and awesome photos, thank you.
Here in California, things are similar to Italy. Bolts proliferate, rock is being defaced with "technology" and bold new lines are pioneered less and less. The technical difficulty is increasing but boldness is not. We all are conditioned to climb harder, but risk less. I too am an "old" man and what I might say does not "cut it" these days, but I miss the days when "running it out" was the norm. Again, thanks for the great article. Alois.

I was a bit surprised reading what you wrote: I thought in US bold climb was well established. May be there are different ways of climbing according to different areas/countries of US?
Another question I should put: bolts proliferate only in new routes or attempt old bold routes too?
Thank you for your visit and your answer, if you like.
alberto

The first question you pose, IMO, You'll find less and less of bold, protection difficult, complicated new ascents in the last 20 years everywhere in the US, (this is just a general statement). Bolts (again in general) proliferate mostly new routes as people,trained in gyms, find difficult but extremely hard to protect lines on established formations and proceed to bolt it, often by rappelling and pre-placing bolts from the top down. The element of adventure has been totally lost and suplanted by technical difficulty of each move, changing the "game". People respect local traditions less and alpine terrain is not immune to excessive bolting either. There are bright exceptions, of course, some bold free climbing is being done (Yosemite, Tuolumne for ex.), but if you look at the US scene overall, we are collectively changing the game for ever (right or wrong).

The situation is similar here in Europe, with some important exceptions: the Dolomites area, Orco Valley and UK climbing areas. But i think a return towards trad climbing is still possible.
Many thanks for your interesting contribution!
alberto