The elderly man working the toll booth outside of Chicago wasn’t sure what to make of me. It was the dead of winter, just hovering around zero, and there I was, shirtless, offering my cash through the half-cracked window.

The toll booth human has probably seen it all—so this wasn’t anything new or really that shocking. Just odd.

Five minutes earlier I was sipping coffee, 5 hours into an 8-hour roadtrip from Ohio to Apple Canyon State Park, Illinois. As I brought the Styrofoam cup towards my mouth, the grip was too severe, and the lid popped off. Coffee consequently flooded my lower chest and stomach. It burned. I ripped both shirts off and noticed a little blister on my abdomen, above the bellybutton. I was disappointed in the flab around my stomach. I had gained 10 pounds over the last two months, not running while drinking a lot on the weekends.

Three more hours to go, should be smooth sailing. It’s not like I was going to lock the keys in the rental car…

For $30 with unlimited mileage, it’s hard to not rent a 2016 Chevy Impala. Wish it was a ’64, but I’m white, so whatever. The best man at my wedding, Dumpster, came up from Columbus and met me at Enterprise Rental Car. We left at 5 p.m., Friday, February 11, 2016 from Mansfield, Ohio. Took 30 to Findlay, then up I-75 past Bowling Green and into south Toledo. Then jumped on the 80/90 Turnpike west towards Indiana, just south of the Michigan state line. Things were fine at first, but the lake effect snow hit hard around South Bend, Indiana. 25-35 MPH, whiteout and general nervous driving.

The snow let up as we began going through and paying the 100-some toll spots necessary get around Chicago. After the coffee spill I couldn’t get one of the automated toll collections stations to work. So frustrating as the line increased behind me. Finally made it free, continued west around Rockford and around midnight, stopped to get gas in Freeport, Illinois.

I was pumping gas and Andy got out of the passenger’s side and said he was going to piss.

“You have the keys?” he asked. I felt in my coat pocket and reassured him that it was all good. He hit the lock button and we both made our way inside the convenient store beside the pumps.

The keys I had fondled, however, were not to the Impala. They were the keys to my regular car, not the rental. We were screwed. I saw the real keys relaxing on the dashboard, poking at me while they smiled. Initially, I thought, “I’m just going to bash out the window. I got full insurance coverage, so it would be cheaper than paying a tow truck and I don’t have AAA. But before I go find a fitting rock, maybe I should call Enterprise? I remember seeing an OnStar icon on the dash.”

Sure enough, after 10 minutes, the doors were open via an OnStar satellite. No trying to find a tow company, wondering if they would answer and actually come, how much would they charge, would damage be done to the vehicle, etc.? ‘Twas a real great get-out-of-jail-free moment.

Around 1 a.m., we arrived at Apple Canyon State Park, Illinois. There was actually someone camping, huddled beside their fire that had melted down to red coals and embers. We killed the headlights and found a place to park beside an open camp spot. We decided to go coward instead of getting out and setting up the tent.

I tossed and turned the next three hours until 5 a.m., and we headed on the road again. North through Warren (which sits one mile south of the Wisconsin state line), then heading west, the final charge towards Charles Mound.

It wasn’t quite sunrise, and we wanted to be respectful, so we waited till dawn. I took a time lapse video. Then we started hiking. Just a mile or two up an old road, fields on all sides, nice views of how Illinois begins its winter days.

The last 50 yards to the top Dumpster took off running. He knew I’d want to be first to the summit. I gave chase—nothing like sprinting in -3F. 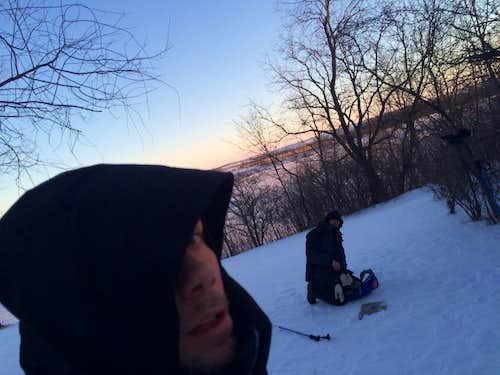 On the descent, we cut through the woods and when we came out on the other side, a dark pickup truck was bobbing up and down the dirt drive. The property owners. I waved. The person sitting shotgun waved back, but was seemingly a bit confused as to who we were or perhaps the fact that another set of crazy highpointers had shown up, at the earliest time possible.

Took us closer to 10 hours to drive home. Went SR 30 all the way across Indiana, which showed us more of the state’s countryside, but none of which we were happy to see.

Doubt Katahdin will happen this winter. Not looking good for Rainier in the spring, either. Think I’m just gonna do some small ones and try to get one high but not hard mountain out west this summer. Then we’ll have to face Katahdin in 2017. Destiny isn’t something you follow—it just happens. Especially when you force yourself onto Destiny’s back, and ride that spine into the dirt of the deepest canyon floor.