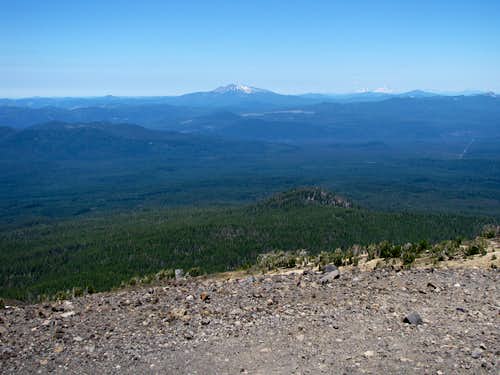 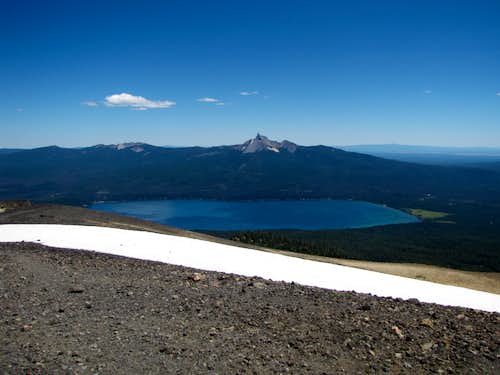 The summit view of Mt. Thielsen and Diamond lake 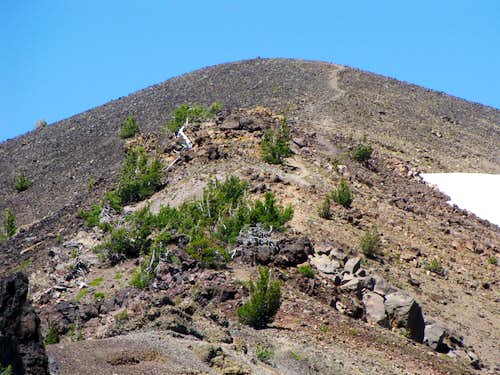 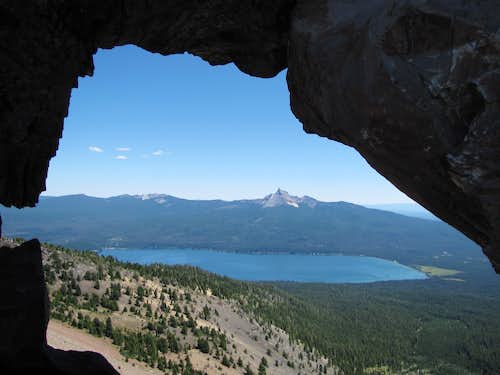 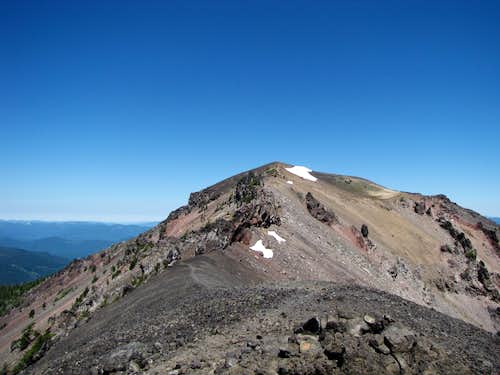 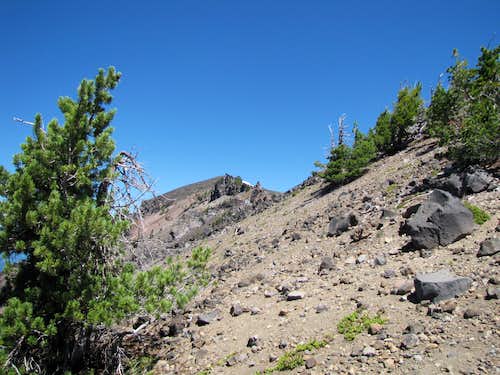 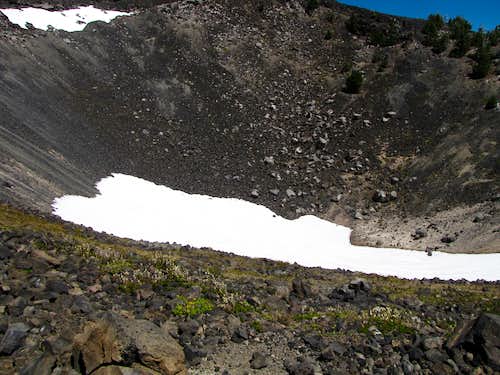 Crater below the false summit 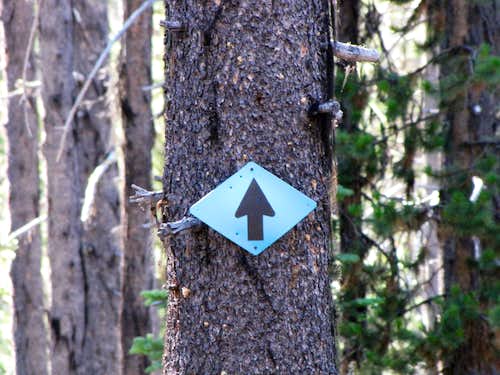 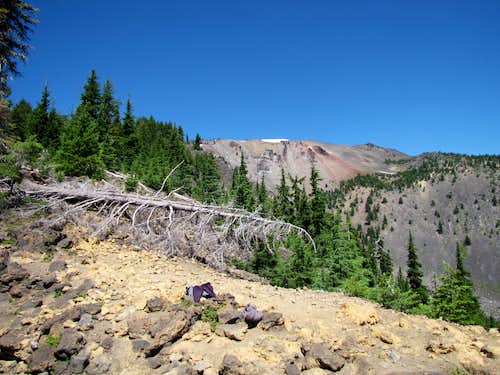 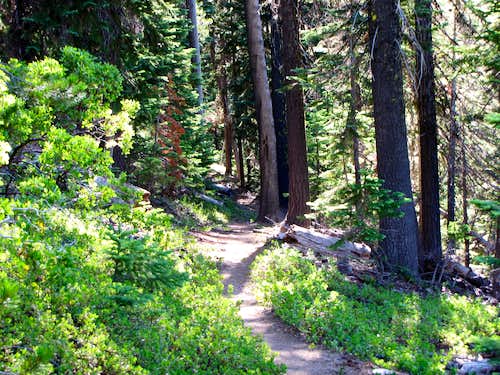 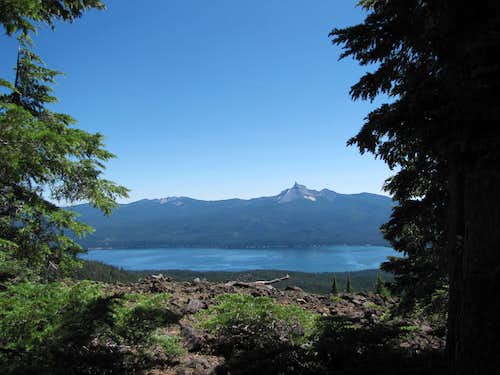 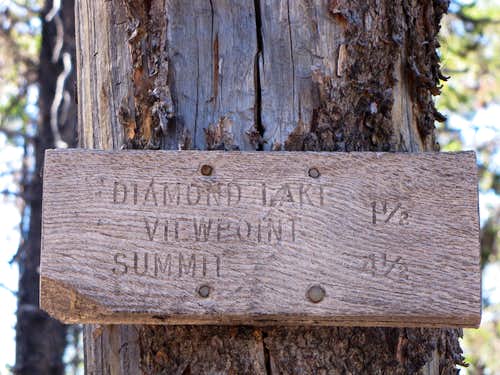 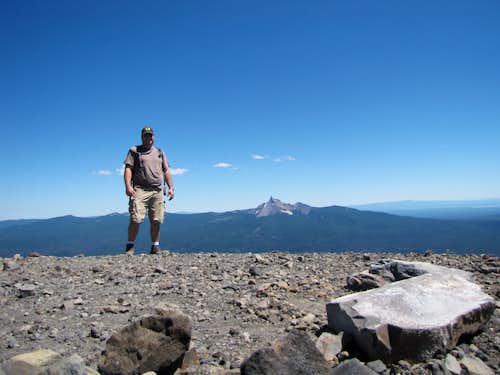 This was my first ever summit. I am in the worst shape of my life. Over weight and I quit smoking 2 years ago after having smoked for 24 years. Not the optimal time to start a new hobby but I'm so glad I did. Mount Bailey was a great starter climb. I was feeling a bit apprehensive as I have never summited a mountain before and I was making the trek alone. I did not know what to expect. I started my adventure at about 9AM. The trail was well maintained and well marked with blue diamond directional markers. The first 2.2 miles of the hike was through the trees and was a fairly easy hike with no big inclines. The mosquitoes are vicious so I would suggest something to repel them and a Benadryl bite stick for immediate relief. At the end of the first 2.2 miles at the 4X4 access, the trail became much steeper and stayed that way. At this point I was wishing I had a 4X4 to cut out the first part of the hike. The years of smoking were starting to show. As I continued to climb higher the trees would occasionally open up to a beautiful view of Diamond lake, Mt. Thielsen, and the other surrounding peaks. The higher I climbed the rougher the trail became and turned from a smooth dirt trail to a small rocky trail. I was glad I had purchased new hiking boots with a good gripping sole. I was greeted warmly by other hiker who had made the summit and were on their way down the mountain. Most had very encouraging words to say as they probably saw my struggles. As I climbed higher and started to get into the alpine tree line I kept looking for a view of the summit to see how much further. Eventually after many breaks and beautiful views of the surrounding area I got my first glimpse of the summit. I was encouraged and discouraged all at the same time. The summit was in sight but I still had a long way to go. I kept the thought in my mind that there is no way I am going to quit. Even if it takes me 3 times as long to climb this mountain as it would the normal person. I don't believe I was alone on the trail and continued to ask for the strength to continue. As the trees thinned so did the air and my lungs continued to work hard for all of the years of abuse. I reached the crater below the false summit and could see the end in sight. This part of the climb was the steepest yet and I took many small breaks to catch my breath. I could see the summit from the top of the crater and the group that had passed me. This was very encouraging and I was becoming excited to reach the top. I finally reached the false summit and took a much needed rest. The view was incredible and I was elated at my accomplishment thus far. I pushed on and walked along the rock ridge and finally made it to the Thielsen window.   Probably the most famous photo spot along the trail. The terrain became very steep and loose but was manageable. I heard the voices of the group that had passed me so I back tracked a bit to find a good place to let them pass as the trail is very narrow and loose. They were glad to see me where I was because they were worried about me being below them where the trail takes a couple switchbacks through lose sediment and it also bottlenecks down to a short 4ft wall you have to climb. After climbing the short wall there was a steep climb through loose debris. At the top of the switchback the summit was in sight. I was so excited that I did even think about being short on breath. After a short hike I finally reached the top around 1:30. It was an amazing feeling to have achieved a long time goal and being alone on top of the mountain was pretty surreal. I felt blessed that the air quality was good and I could see from the Three sisters to north to Mt. McLoughlin to the south.  After spending some time on the top it was time to hike down. As I hiked down the trail I was more amazed at what I had just accomplished. The trail was steep going down and I could not believe what I had just made it up. The views continued to be spectacular and I felt blessed to have been able to experience such joy as I did. The whole experience was well worth it. Even after having smoked as long as I did, I was able to accomplish this task. I feel as if I can accomplish anything. This trip made me want to get in shape so I can climb more mountains and I have the belief that I can. This website was a great help for what to expect. Thank you Summitpost. I enjoy reading others posts and gaining knowledge from their experiences. Since then I recently summited Mount Scott in the Crater Lake national park. Look forward to challenging myself with more mountains and more difficult climbs.

on your first summit, Jeff.
It's nice to see that using this site helped you with good information. You may, however, consider adding more details to your report. Details such as the time you started and finished, how you felt on the trail, what you noticed while hiking, etc. Adding more photos also goes a long way to a more complete Trip Report.
Happy hiking,
Marc

Thank you, it looks good and I'm sure you will make more improvements in the future.
My vote 10x10.

That is a good peak to start out with

An Oregon "Top 100" is a great start. Ditto to the suggestions above. Keep knocking them off. I plan on being in that area in September to knock off a bunch of those peaks and Bailey is on the list.