An alternative way to the Großer Moosstock

An alternative way to the Großer Moosstock 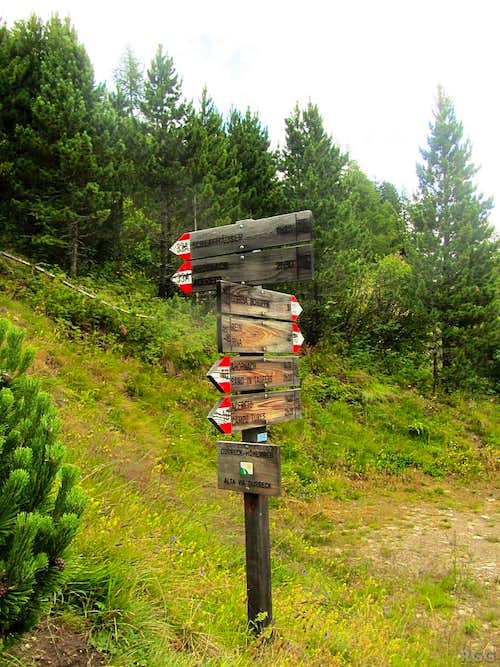 Signpost at trailhead by the side of the (private) road. At first, I have to follow the well marked Durreck Höhenweg, trail 33A. 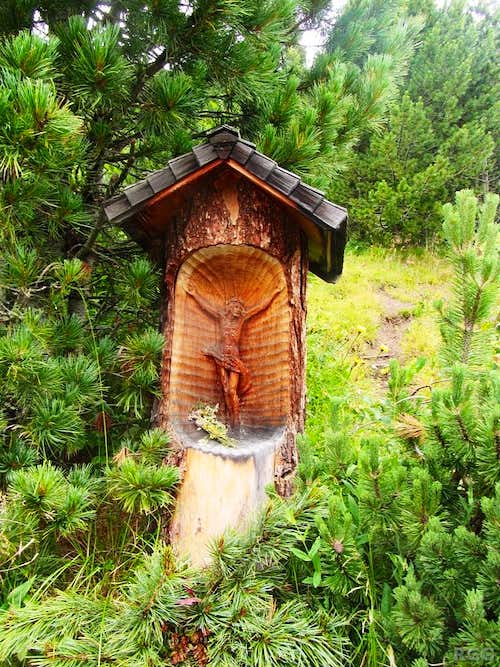 Folk art by the side of the trail
The weather forecast for the day said there might be rain, with the possibility of thunderstorms in the afternoon. Normally I would be inclined to stay in the valley and wait for better conditions. However, the summer of 2014 didn't see very stable weather in the Alps, so I had already had plenty of rest and changed tactics. Only if it was already raining would I stay put, otherwise I would take my chances, and if the weather turned bad I would either turn around or find the nearest shelter.

Today I decided to make my way up the Großer Moosstock (3059m). That meant a big elevation gain from the nearest trailhead, at 1650 m or so, above the village of Ahornach (1350m). In fact, since I didn't have a car, I expected to have to walk from Ahornach itself, for that's as far as buses go, and based on the elevation gain of 1700 m I was counting on four hours for the ascent. I didn't really expect to get all the way up there. I figured that at some point it would start to rain and that would be the end of it.

However, as I was just outside Ahornach, hiking along the road, I got lucky. A car came by, I stuck up my thumb, and I got a ride. Now, at the trailhead, the road doesn't end just yet, but becomes a private one. It continues to the northeast, following the slopes and gaining more height. Once I was in the car, the driver asked where exactly I would like to get out. I was studying my map, to make sure I got the right spot, still planning to start at the normal trailhead. But then the driver explained he would drive higher still - he had business up there, at one of the small establishments up there catering to hikers, and that meant he was allowed to drive the private road. I gladly accepted his suggestion to get out of the car higher up.

Looking at my map, I saw a faint, dotted line heading up the Großer Moosstock, starting at almost 2000 m from the road we where on. All in all I was quite happy about that. Instead of a 1700 m ascent, I now had just over 1100 m to go. That meant I was much more likely to beat the rain. 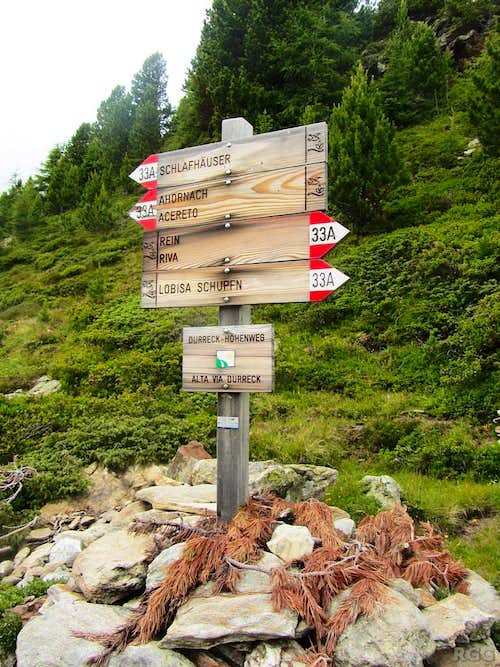 Many signs, but just two directions. Where is the smaller side trail?
The Durreck Höhenweg was a dashed line on my map, and proved easy to follow. But, according to my map, after steeply ascending some 250 meters there should be a junction with a smaller trail. When I came to the location where the map predicted that junction, I saw nothing. I continued along the big trail, keeping a sharp lookout. And, sure enough, some 100 m from where I had expected, there was another signpost - but, strangely enough, it only had signs for two directions, both for the Durreck Höhenweg. Where is my trail? 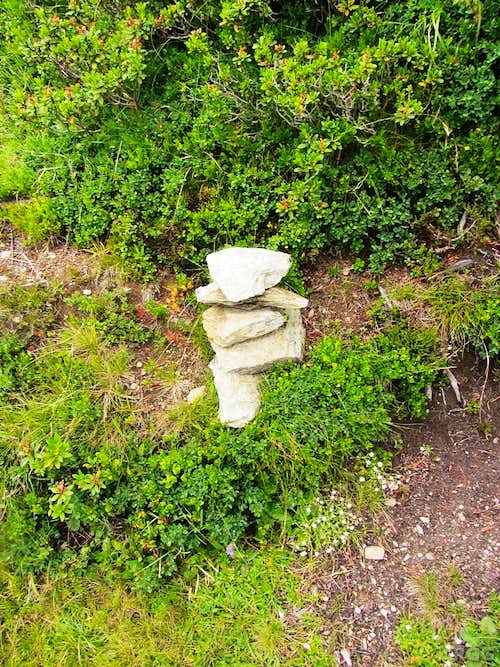 The green paddle points at the start of the trail up the SSE ridge as marked by the unremarkable cairn, without a sign saying where it would lead to.
In satellite view, the lowest bit of the trail is visible. Zoom in for a closer view, or click here to view a larger map 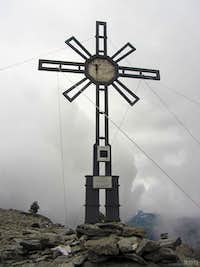 The big summit cross
Very soon after that, I got above the tree line. The trail became much less obvious, but there were occasional cairns and some old paint marks, and with clear views of the mountain I was ascending, I couldn't really get lost. Higher up, there was no more vegetation. At times, the ridge got a bit steeper and I had to scramble my way up the rocks. Nothing serious; I estimate that what I did was around UIAA grade I.

When I reached the summit, it was still dry. In fact, I even had a bit of a view.

After a short lunch break, I headed down. I followed the normal route this time, down the SW ridge. Though the clouds occasionally looked threatening, it only started dripping by the time I got down to the regular trailhead. But as luck would have it, by that time two local hikers arrived back at their car, and I hitched another ride, all the way down to Sand in Taufers. It sure was a lucky day! 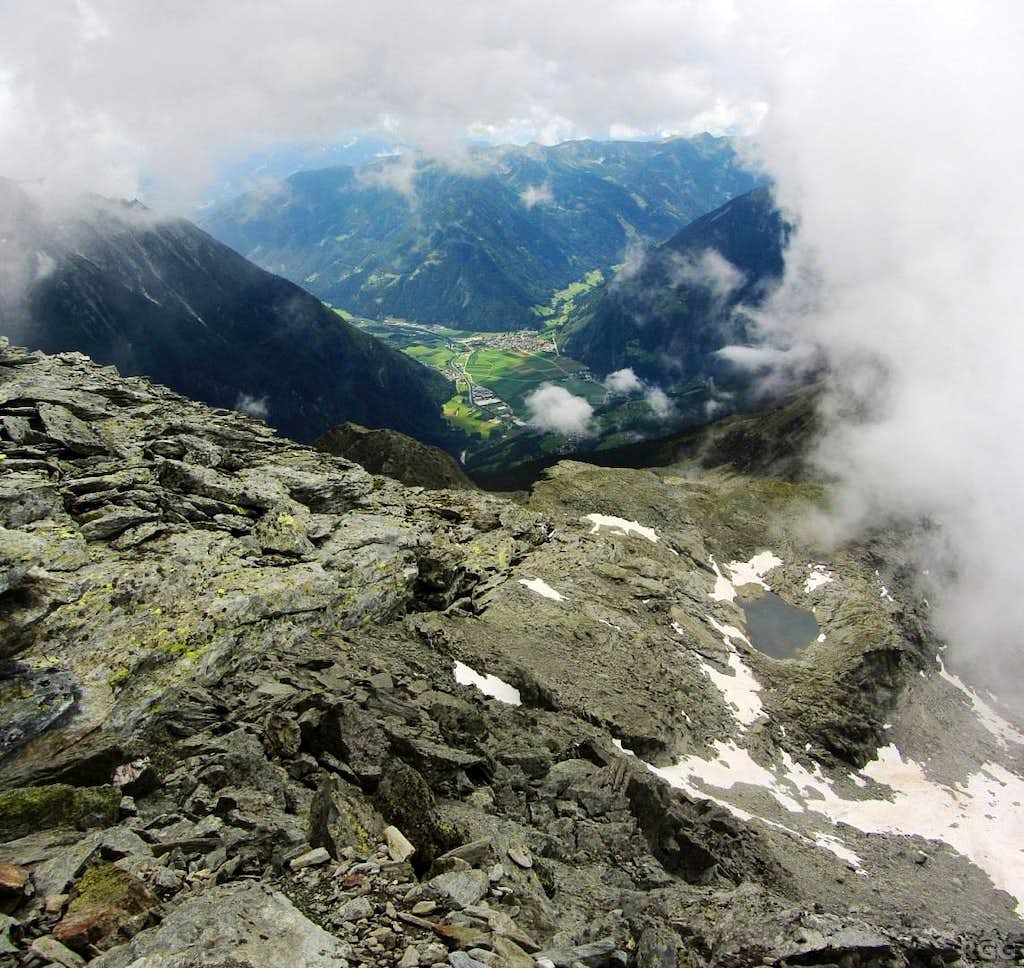 Summit view down to the valley floor, more than 2000 m below