Dawn from the meadow by our campsite

The range crest as seen on the way to Blodgett Pass

If you like to avoid popular routes, Blodgett Canyon has virtually endless possibilities for you to enjoy some isolated, top-of-the-world scenery.

Hopefully, the Bitterroot Range page creators will not hound me from the site for saying this, but I have sometimes found the Bitterroots to be underwhelming. Blodgett Canyon, though, is an easily accessible exception to that observation. I have hiked into it twice, but the first journey was the nicer and more exciting one of the two. That first trip was a two-nighter with my wife, and going midweek resulted in the pleasant outcome of spending a full day without seeing another person. And although the views from and on the way to Blodgett Pass were the scenic highlights of the trip, it was my bushwhack/climb to the north rim of the canyon that provided my lasting memories of that foray into the Bitterroots.

The scenic first few miles of the trail through Blodgett Canyon lead to a good bridge over Blodgett Creek, and the trail enters denser forest shortly after that. There was considerable deadfall to cross back in 2000, but nothing made the trail impassable or even difficult. About eight miles from the trailhead, the trail enters the Selway-Bitterroot Wilderness and soon leads into an open meadow with nice views of the surrounding peaks and canyon walls. Just before that meadow, there is a flat area with many good camping areas, and the creek is nearby. This spot is where we spent our two nights.

As my wife slept through the early mountain morning, I walked out into the meadow (5500’) to try some dawn shots of the mountains. Before long, a familiar experience ensued. A waterfall on the slopes north of me caught my eye, so I went to check it out. At the waterfall, the views had just gotten better, and I began to eye the steep terrain above me. The canyon rim beckoned, and I really had no choice. Up I went.

There was no discernible route up, which lent the illusion (and who knows? Maybe it was real) that no one else had ever passed this way. Most of the going was just steep Class 2 on good rock, but there were brushy areas calling for route-finding and/or making for slow going, and there were occasional Class 3 spots near the top. Atop the rim, views extended in all directions (nice perspective looking down on Mill Creek Canyon and its lakes), and those views included rocky tors, remote lakes, and untrammeled stretches of forest. It was a moment soaked in secrecy and triumph, and it is my enduring memory of the Bitterroots.

The section of the rim I crested lies at just about 7500’. From the meadow, it’s about a mile to the crest. It’s definitely worth the burning thighs and heaving lungs. 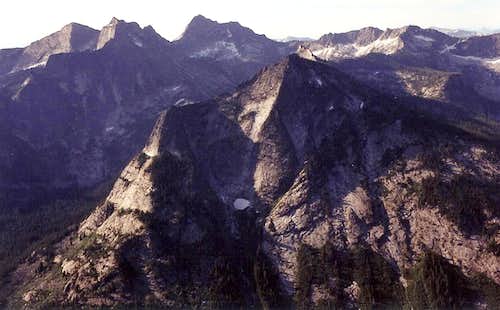 South and west from high on the climb

In the afternoon, my wife and I hiked out to Blodgett Pass. The trail to the pass is about 3.5 miles from where we camped (now almost 12 miles upcanyon from the trailhead) and at about 5900'. To reach the pass, the trail climbs 1100' in about a mile. Along the way were the finest trail views of the trip, extending west to the crest of the range and revealing some glistening bare rock reminiscent of the Sierra Nevada. Blodgett Mountain (see photo below) looked like a pretty easy climb from the pass, but storm clouds were moving in, and we headed back to camp (an unfortunate choice since a big storm never materialized, but a wise one nevertheless). Another time... 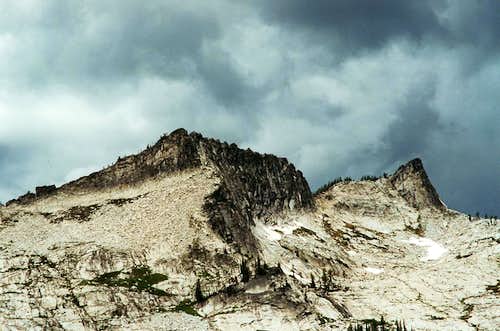 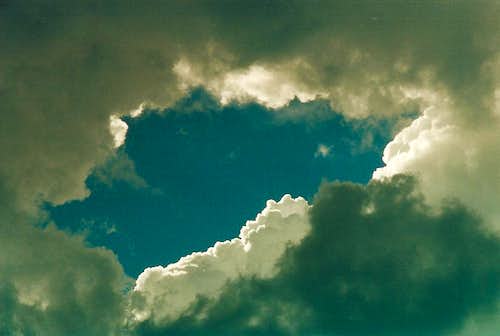 This sky scene could be from anywhere, but it seems so fitting to be in Montana.

Granted, at first I was a little put off by your characterization of our Bitterroot Mountains, but then I realized you’ve never visited the “real” Bitterroots, only a popular peak and a canyon or two. Trapper Peak and Blodgett Canyon are two of the most-visited spots in our mountains because of, as you said, “easy access.” If you want an alpine experience in the Bitterroots, generally you need to climb above 8,500’ AND make some effort at reaching a truly remote area. Interestingly enough, your later versions of this page verify this reality when you state, “…the finest trail views of the trip…” were near Blodgett Pass

Granted, the Bitterroots are not has “high” as the mountains found in some other ranges, but I doubt anyone who has visited our remote peaks will claim they are less rugged than many others.

As for the dense forest, well I can’t disagree. Fire suppression for most of a century has certainly played a part in that. The fact that the Bitterroots were never mined as heavily as many other places in the country (Colorado 14ers, as one example), thereby keeping the mountains comparatively free of roads, is also an important factor. No roads make it more difficult to log. It’s true everywhere on the planet where trees grow – no roads, thicker forest (until the fires come).

Tim was correct in pointing out that our Bitterroot Mountains were not always an “officially” designated wilderness area and that the dammed lakes were in place long before even the concept of official wilderness was even born. In point of fact, the Bitterroot Valley receives so little rainfall that it almost qualifies as desert. Without the irrigation provided by those dammed lakes it is unlikely the valley would have ever developed the agricultural way of life that formed the basis for habitation by the white man. Now, since the valley’s “discovery”, agriculture is on the wane as gentrification and crowding is infecting our valley, much to the dismay of many who live here.

That being said, there are many more “natural” than “dammed” (damned) lakes hidden in the mountains. You just have to know where to look. The next time you’re in our area, I’ll be happy to take you to Bare Peak, a remote, alpine, and rugged ridge-crest. The route takes you through very little “heavy” forest and passes Nelson Lake which was “naturally” formed by a landslide several centuries ago. I believe you’ll find such an outing offers everything you could wish for. Bare Peak is just one of many examples of alpine wilderness experiences which can be found in the Bitterroots. You just have to know where to look.

Lastly, I feel attaching your trip report to the Bitterroot Mountain Page is slightly inappropriate, in that it would be better if attached to a page for Blodgett Canyon or Blodgett Mountain. Alas, those pages do not currently appear on SP, so that is not your fault. I think your page should stay where it is, but suggest that it be moved if one (or both) of those pages come into existence.

As you’ve probably realized by now, those of us who live near and/or spend considerable time in the Bitterroots are very protective of our mountains. Not so protective, I hope, that we stop considering others’ opinions. But we love our mountains – just the way they are thank you, warts and all!

Thanks for all that info, and I might take you up on your offer; it sounds nice. I deleted a lot of what I said since it was an impression based on a small part of a vast area-- it came across as more negative than I meant it to. And it's interesting about the lack of rainfall-- I've run into storms, some very heavy, all four times I've been in the range, and so dampness clouds my impressions, too.

I agree completely about the placement of the page, but I wanted to share the story, and this was the best place to attach. I did look for a Blodgett page, and I even thought of making one for the canyon, but I don't know its full extent well enough, and I think it would be better left to someone closer by, and I hope someone does that.

I did think the Blodgett and Trapper areas were spectacular, though. Personally, I liked Blodgett far more than I like Yosemite Valley, which I think is incredibly overrated and incredibly ruined (but I'd better be careful before the Y. Valley lovers come for me, too).

Anyway, I hope to be back. There's unfinished business for me out there, as I like to say. El Capitan and Blodgett Mountain are among that business, and maybe Bare Peak is now, too.

Don`t neglect to climb N. Trapper when you come out, and also the Como Peaks traverse. Spectacular country! And oh yeah The Heavenly Twins, Sky Pilot and Ranger Peak too!

Point taken, and thanks. What about the Selway Crags? They intrigue me, but I've never been able to learn much about them beyond spotting them on a map and hearing they're awesome.