0. General. From 1215 m to 2332 m, two major summits, each on one side of the valley. Marked and non-marked paths, the latter can be easilly lost. A few steep (rocky) sections just below the two summits. Gear: Only good shoes and poles.

3. Psyche: 2 - easy, a few steep and a bit exposed sections below the top.

The idea is to do a round tour, joining the ascents on Polinik and Creta di Timau. As the joining ridge is obviously hard to do, you need to cross its slopes. And here is the problem, as the old shepherds paths are lost. That rarely anyone walks there, you'll realise when seeing unexploded grenades from the World War I. I did the route alone in October 2006 in 9 hours. To get a better overall picture, you can read also: 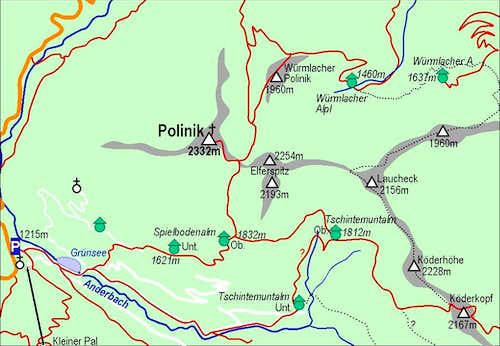 From Ploecken Haus, 1215 m, you go eastwards, pass Gruensee, and there turn over the meadow towards the North. Through the woods more steeply up, then by the mountain road and across it in the eastern direction up on Untere Spielboden Alm. Further towards the East through light woods, then soon out on grassy slopes and over a broad shoulder towards the North up on Obere Spielboden Alm (water). From the alpine meadow further to the North in a shallow basin with a small lake, and more steeply up on Spielbodentoerl (notch). From the notch by the SE ridge (rocky, you need a safe step) to the top. It's 1120 m of altitude, a middle hard walk-up tour, 3 hours.

From Obere Spielboden Alm, 1832 m, you go by the marked path (Karnischer Hoehenweg) further towards the East. Crossing the slopes of Elferspitz and Laucheck you reach Obere Tschintamunt Alm, 1812 m, and continue further on by 'Hoehenweg'. Now it crosses the slopes of Koederhoehe, you gain some altitude and find yourself on a nice grassy balcony. From there cross some 10 minutes more to the point, where the marked path turns left and starts ascending directly upwards. Here is the first decision point of your tour. On the map (Tabacco, 1:25.000) you should be able to follow from here an unmarked path, which descends gently across the slopes. I couldn't find it. Instead, I found (hardly!) a path, which goes first horizontally, but later ascends almost 100 more meters on the plateau below Koederkopf notch. So, if you must ascend these 100 meters, the second option would be to follow the marked path and leave it when it reaches the plateau below Koederkopf notch. In any case on this grassy plateau you must descend again and continue crossing slopes as low as possible. In front you already see the steep grassy slopes below Blaustein / Promos, but to reach them, you still need to cross a steep and quite deeply cut ravine. Getting into ravine high above (let's say on some 1900 m) is hard, and exiting, and so keeping the altitude, would be even harder. So, you need to descend more than 100 meters down. Over the steep grassy and bushy slopes you might find also weak trails. When you reach the ravine below, you continue down till you hit a well seen un-marked path, which comes from the other side. Here you got your connection again. Continuing by this path is easy. Further towards Creta di Timau northern face the path, which you follow, would descend some 100 meters more. And you would be doing a big detour. So, why not going directly again over the slopes of Blaustein / Promos? This is your second point of decision. I turned left up from the path on the place, where the path enters dense bushes. I ascended directly upwards, the slope is steep, unpleasant to walk (covered with stones and whole fields of blueberries). So, I did almost 200 meters of elevation again and then on the first occasion crossed towards the right through bushes on grassy slopes, which soon bring you on the marked path, coming up from Passo di Palgrande / Tischlwanger Toerl. To the ridge you have now only a short ascent. In many turns you follow the marked path up, when it branches, you take the right branch - towards Creta. In a few minutes you ascend on a nice notch. There's a ruin of an ex military building (from the World War I) and also a very nice view down on Lago Avostanis surprises you.

To The Top Of Creta Di Timau 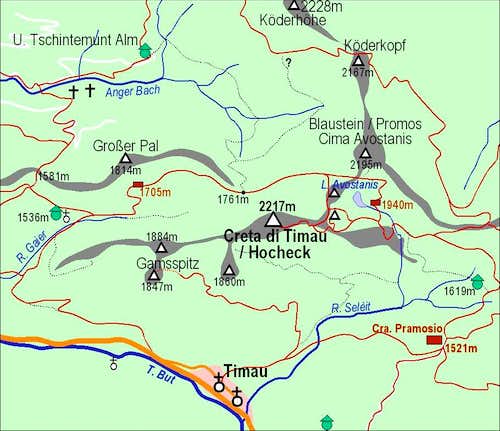 From the notch you continue the ascent by the narrow ridge towards the summit of Creta. The path first ascends a few steep sections, you can inspect some caverns from the WW1, but soon the ridge becomes too sharp and the path avoids it on the southern slopes. Over grassy and rocky slopes you soon reach another notch in the ridge, also fortified with buildings from the WW1. Now you expect to attack finally the summit ridge, but the path again takes you over the slopes on the southern side, where it hits a broad mulatiera (supply path from the WW1), which comes from the hut below on the Italian side. In few turns you gain some altitude, you cross more slopes and finaly by a big cavern (a whole house could go into it) the broad path ends. In the nearby ravine marks lead you over some 15 meters of rocks (easy climbing, somewhere between a steep walk-up and a UIAA Ist degree climb) on the summit ridge and in a few next minutes to the top.

From the summit you first descend by the ascent route below the north face of Creta di Timau. There continue by the marked path down on Passo di Palgrande / Tischlwanger Toerl, 1761m. Here you decide for the third time. The natural decision is to go towards your right directly down in Anger Bach valley. This path (if you find any) is not marked. The other option would be to continue by marked paths all anong the Main Carnic Alps ridge and descend down in Anger Bach Valley later (or even go to Kleiner Pal and descend by cable-car). If on Passo di Palgrande / Tischlwanger Toerl you turn down directly, you will first follow animal trails and some kind of a path, bu later it's more and more hard to do efficiently so. You descend more or less directly down, or keeping a bit towards the left. In the forrest below you hit a good path, almost a cart-road, but it goes unfortunately in the wrong direction - it ascends towards the left and descends towards the right. So, you go right by it, but it soon turns into a weak path, even more unpleasant as before. You keep it (the slopes below you are steep) going far towards the right, finally exiting on a big clearing at the end of Anger Bach valley. In the distance you se Untere Tschintamunt Alm. The path to Untere Tschintamunt Alm goes by the right side of the valley. But it first ascends some 60 meters and only then crosses the slopes horizontally. Also this path is (in late autumn) not so easy to follow, especially crossing the ravines just before Untere Tschintamunt Alm. When you reach the alpine meadow, you'll also reach the road which you easilly follow down the valley to the parking place near Ploecken Haus.