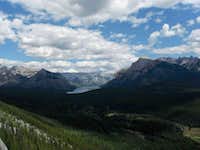 Cascade Mountain in Banff National Park displays several significant rock faces. By far the most common of those is Mother’s Day Buttress. To the right of Mother’s Day Buttress on the other side of a waterfall fed drainage is an even larger rock face named Bankhead Buttress. The most common route on Bankhead Buttress is a mostly bolted six pitch Mark Stewart route (the topo shows seven pitches; the description states six) appropriately named Valley View (5.9) (2001) (direct view up the Bow Valley). The most difficult established route to date (2011) is Chris Meyer’s four pitch Lipburner (5.11d) (2006). Lloyd MacKay help established several older corner routes on the buttress in 1971, Dan’s Delight (5.6), Ken’s Cave (5.7), Lost (5.7) and Head Jam (5.6). 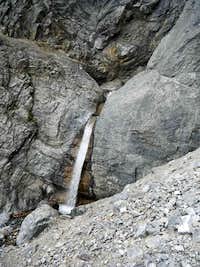 Valley View I thought was worth doing on a cold short day out. Lipburner I felt was way too chossy and needed to be cleaned and possibly is not worth cleaning. I had a hand hold and foot hold break on the first pitch. Chris Perry makes note in Banff Rock that “Overall, the quality of the rock on the buttress is not good. The rock tends to be shattered and loose in places, and the cracks are often shallow….” I tend to agree as that was my experience on Lipburner. However, the approach is short and the wall sunny making any of its routes tempting on a cold short day.

Exit the TransCanada at the first Banff exit (heading north). Turn right and cross the cattle guard. At .7 miles (1.1k) from the cattle guard, use a significant gravel pull out on the left next to a large drainage. Follow the trail on the right side of the drainage up to the wall and a waterfall pouring into the drainage. Lip Burner starts fairly immediate to the right. If heading for Valley View and company, turn right and follow the climber’s scree trail up the wall until it levels off into some trees. Look for bolts and orange tape (2011) marking the start to Valley View. 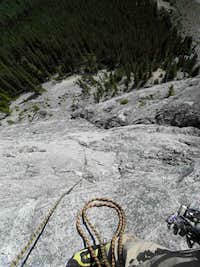 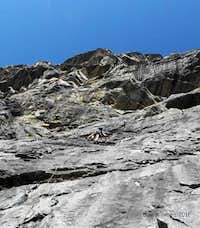 Routes Listed Right to Left as you Face the Wall

Despite the initial lure of crack climbing my way through the two roofs, we were not impressed with the choss factor on this route. Midway through the second pitch we bailed after several clean looking holds broke below. Dow

It is easy scrambling up to a small ledge below three single bolts closely placed. This is somewhere close to the start of the first 5.6 pitch. From there, I passed two rap stations and continued to the top of the second pitch (5.9). The last several meters of this pitch offered good face climbing at the grade on typical sticky Canadian Rockies limestone (almost vertical) slab. We combined the next two pitches, 5.8 and 5.9 as well. The start of the 5.9 4th pitch was similar to the solid face climbing at the top of the 2nd pitch. The last two pitches went fast and furious up solid rock to the top of this section of the buttress. The route is set up to descend via 25m rappels on solid, relatively safe, ground. Dow