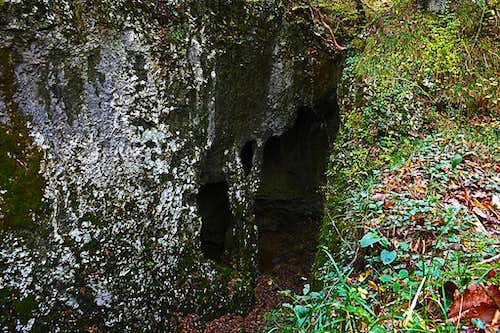 This certainly is not a climbing destination, but it is for sure a hiking one. I'm describing a remote, today lonesome valley with unspoiled nature and a well developed system of karst caves. It is a part of Karst Edge hinterland, north-east of the already described and popular Val Rosandra / Glinščica. 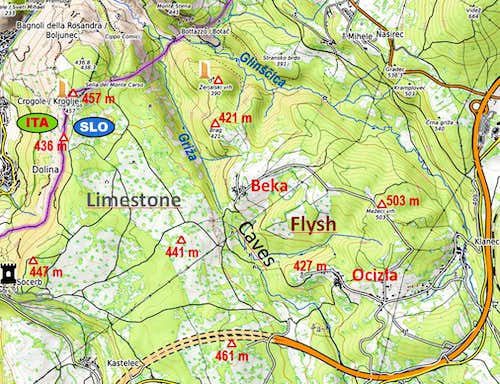 In this valley, the Paleocene limestone of Karst edge is bordered with an Eocene fysch ridge, on which the two villages, Beka and Ocizla are situated. The contact area is the valley of Griža. The hills on both sides of the valley are approximately of the same altitudes - from 390 m to 503 m and are quite unimportant for hiking - well, if not overgrown, they offer nice views on the Trieste bay. The map shows how both villages are connected with a local road and how from the west, from near Kastelec village and Socerb castle cart-roads are going towards the east, where the karst caves are situated. So, on the flysh terrain a few creeks are flowing into the valley, but when reaching to limestone, on some 350 m of altitude, they immediately sink into it. The caves are partly connected underground, but water also flows simultaneously on various levels. The following caves are connected to the cave system: Ocizeljska jama, Blažev spodmol, Maletova jama s slapom, Jama z naravnim mostom, Jurjeva jama v Lokah and Jama S-4 / Socerb. The water of the system finally disappears underground and and drains in the direction of Boljunec - the village near Trieste, at the mouth of Val Rosandra.

As already mentioned on the Val Rosandra page, that valley and its continuation towards the villages of Beka and Ocizla were since prehistoric times a most important trade route from the Adriatic coast (Trieste bay) and hinterland. It was the only smooth way (by the valley) over the rocky barrier of the Karst Edge. Many places on high elevations were inhabited already in prehistoric times. Fortified villages (castellieri) were all along the Karst edge. In our area, one was on the place, called taday Sela na Malem Krasu. In middle ages the trade route became more and more important, mostly due to salt trade. That's why on both sides of Val Rosandra / Glinščica valley castles and strongholds were erected. Ruines can still be seen, in our area the 13th century Vikumberg castle was on Lorencon, near the elevation, called today Žerjalski vrh, 390 m. The trade route lost its importance only when the modern roads and railroads were built over the Karst edge. The area was more and more devoid and in the recent times the border between Italy and Yugoslavia and since 1991 between Italy and Slovenia also resulted in slow economic development. As nature in the area has been well preserved, in 1992 Krajinski park Beka was proclaimed a natural protected area, adjacent to the Italian Natural reserve of Val Rosandra.

Hiking to the caves 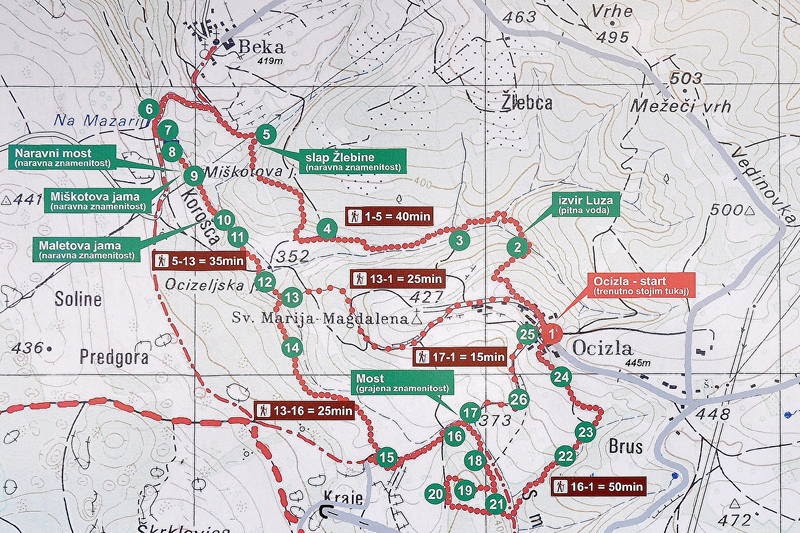 A cave with waterfall

Both valleys, of Griža and Glinščica, can be hiked by many paths and also the ridges bordering the valleys. But be careful! The valley of Glinščica, the Slovenian part of it, is very wild and following the creek all the times requires expertise and caving equipment. Along the valley slopes of course also easy paths go. But the focus of our page is only the relatively flat area of the western valley, called Griža.

A creek below Beka

One approach direction is from the village of Ocizla. You can park near the church of Sta. Maria Magdalena. Then you follow the marked path (and inscription plates) south and westwards down into the valley. The image shows the marked trails and some times. The second trailhead could be the village of Beka, from which we also descend southwards.

The third option is the approach from the west. From the village of Kastelec and Socerb we can follow cart roads towards the east. Usually they don't require a 4WD and can bring us quite close to the valley. But hiking over the karst planes is also very nice, especially in November when the whole landscape is coloured red due to European smoketree (Cotinus coggygria). The caves are very picturesque, wild places and can be easily neared. But in most cases that's all. Entering them is much harder and exploring requires in most cases full equipment and caving gear. Don't attempt exploring on your own! There is one exception however. The so called Blaževega spodmol can be passed by most people, equipped with good shoes an battery. The passage has some 100 meters underground. The creeks flowing into Beka-Ocizla valley have also a few waterfalls. But usually they have weak waterstreams so also the falls are not really spectacular. But you rarely see for example a waterfall which after falling good 8 meters, immediately disappears underground (like the Korošica creek, falling into Meletova jama).