Seized by wanderlust one afternoon in July 1999, I left camp and ended up atop one of the Kearsarge Pinnacles. What I saw and felt there changed me forever, and I left the Sierra Nevada that summer a climber, no longer a hiker. My love of the Rockies kept me out of the High Sierra until 2005, when I decided I had to go back and tackle a few notable summits. How I envy those of you who live closer and can explore the lesser-known gems of the Range of Light!

It had been six years since I had been in the High Sierra, and I’d forgotten how magnificent the rock is there. There is so much of it, and it’s so sheer, with such awesome cracks. I chose three summits, all because they are prominent and easily done as day trips, but for other reasons as well. Cathedral Peak--- it offers great free solo opportunities and is just one of the most striking peaks anywhere in the country. Mount Conness—the highest Yosemite peak north of Tioga Pass. Mount Dana--- Yosemite’s second-highest, highest attainable in a day, and offering a good snow climb as an alternative to the popular standard route.

I climbed the peaks in ascending order by height and on consecutive days.

Approaching Cathedral, I managed to miss the turnoff for the way to follow the Mountaineers Route. This is an unofficial trail and is hence unmarked, and I failed to spot it where I was supposed to. Nearby, I saw a pile of deadfall blocking a use trail, and I figured rangers had closed an illegal path. Looking back, I figure that was the way I was supposed to go. 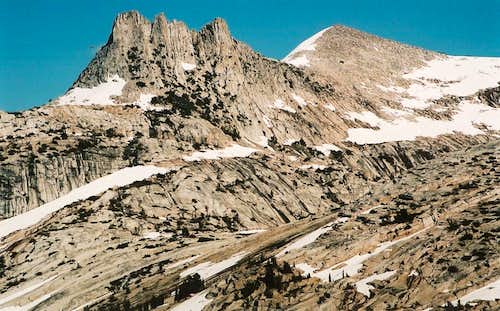 Instead, I bushwhacked in the direction I was supposed to be heading, scrambled over the Cathedral massif and headed for a pinnacle I initially mistook as the true summit, enjoyed views of a tarn and cliffs that few probably bother to check out, and eventually wound up where I was supposed to after exerting considerably more effort than I was supposed to. From there, it was fun and mostly quick scrambling to the summit block. 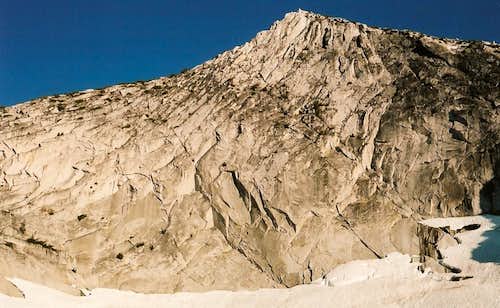 I almost did not finish Cathedral. Guidebooks and route descriptions often overstate difficulties and dangers, but this time was the opposite. The SP route description I used called the final move, only fifteen feet, an easy Class 4 crack, and the remark that some people uncomfortable with the exposure choose to rope up for it had a slight whiff of disdain to it. Well, the crack was easy enough, but the exposure beneath the base of the summit pitch, even the exposure along the ten or so feet leading to the summit pitch, was unnerving and meant no errors. Standing on the ledge below the pitch left just a few inches between me and the edge, and even turning around was scary. The cost of a mistake would have been a few hundred feet of empty air.

Thinking of my son Jack and how he might need a father as he grew up, I left the ledge and climbed a block next to and almost as high as the summit one, and I took pictures of the Echo Peaks and of myself from that spot. I went back to the crack and back to the lower block again, still thinking the true summit just wasn’t worth the risk. Then I started to leave, but my pride nagged at me, so I went back once more. I left my pack behind and stepped back to the ledge and the base of the crack.

Getting up was never my fear; getting down was. Only rarely had I faced in while downclimbing, so my inexperience with that position gave me pause, and I knew facing out was not going to work. Well, I climbed up a few feet and then, facing in, went back down. Then I climbed a little higher, almost to the top, and went down again, testing whether my feet, unaided by my eyes, could both reach and find the two spots key to my safe descent. They could and did.

Finally, convinced I could do it and that I had spent too much time there to quit, I mustered my nerve and climbed to the top, a tiny granite block that holds just two people comfortably. It was quick, easy, and fun. Going down was no problem, either.

In the climbing world, it often works that way, doesn’t it? 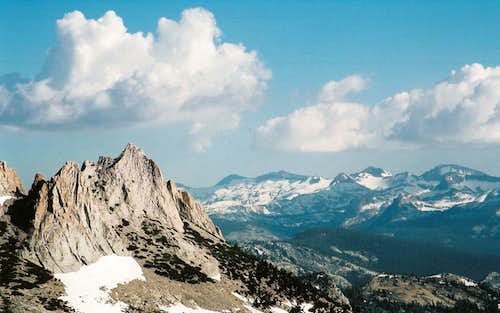 It was hard leaving Yosemite. The weather had been perfect all week and the climbing had been great. Routes up Unicorn Peak, Echo Peaks, and Lembert Dome were calling to my eyes, legs, and heart. But it’s always a good idea to leave a little unfinished business in the mountains; never do I want to leave them with the feeling that I’ve done all I want to do there.

The title was intimidatingly long :)

but inside, nice reading and picts :)

Re: The title was intimidatingly long :)

The original title was even longer (groan)! I've cut it down even more now; I wanted something more interesting than "My Vacation in Yosemite," but I wanted it to be an easy mouthful, too.
Thank you for your comment and your vote.

Your account of working through the hesitation of getting to the top of Cathedral rings bells with me. Different mountain but same thoughts: "my family needs me, it's not worth it" versus "work on it a little bit, you can do this."

Yes-- glad to see where my priorities lie! Maybe my son will read my letters and understand.

Thank you for commenting and affirming that others face this, too.