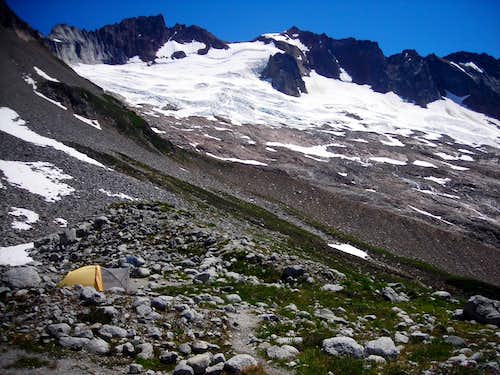 Boston Basin is one of the most popular climbing areas in the North Cascades National Park. Boston Basin has two designated camps known as the low camp (around 5,300 feet) and the high camp (around 6,400 feet). From these two camps, climbers have access to some of the best mountaineering routes in the country.

Take exit 232 east off of Interstate 5 until you reach the North Cascades Highway (WA 20) in Sedro Woolley. Drive along WA 20 for 47 miles to Marblemount. In Marblemount, drive straight across the narrow bridge at the 90-degree turn in the road. From here drive about 21.7 miles down the Cascade River Road. Park at a small pull off at 3,200 feet. Look South to the amazing Johannesburg Mountain and listen for falling ice and rocks.

Look carefully for the trailhead at the abandoned road. Follow the abandoned road for 3/4 of a mile to the old mine site and be on the lookout for the climber's path. Ascend the steep and unforgiving climbers path, with four stream crossings, to treeline at around 5,300 feet. If you have a permit and are looking to camp, be on the lookout for the composting toilet and hardened campsites of the lower camp on the moraine in this area. For the high camp, continue northwest on the climber's path to approximately 6,400 feet where a few hardened campsites and a composting toilet can be found.

Parking here requires a Northwest Forest Pass which can be purchased for $5/Day or $30/Year.

Permits are required to camp anywhere in the North Cascades National Park. Permits are free and must be obtained at the Marblemount Ranger Station prior to your adventure.

Keep in mind that the Boston Basin area is extremely popular and permits may not be available on busy summer weekends. Climbing rangers frequent this area; please be respectful and obtain a permit prior to your climb.

Permits are not required for day hiking.

Camping in Boston Basin is only allowed at the two designated campsites known as the low camp (around 5,300 feet) and the high camp (around 6,400 feet). Composting toilets can be found at both camping areas. Camp only on hardened sites as this alpine environment is extremely sensitive. High camp provides easier access to Mount Torment and Forbidden Peak, but snow may be found at this site well into July.

The peaks near Boston Basin are most commonly climbed during the summer months of June-September. However, experienced climbers visit the area year-round.

In spring or late summer, be sure to check the road conditions before you leave for Boston Basin as the Cascade River Road can close due to flooding, rock slides, etc.