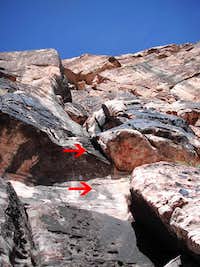 1st Pitch- 80’- 5.10d
Brass Balls is a sister route to a winter classic at Red Rock, the Spectrum (5.11a). Both are found on Spectrum Wall which is located across Pine Creek from the north face of Mescalito (Dark Shadows). Therefore this area is south facing which obviously makes it a prime location to congregate for short multi pitch climbs during the winter months. 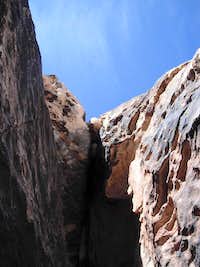 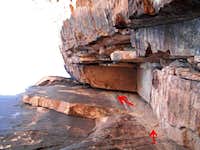 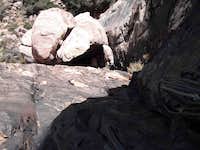 The lower pitches of Brass Balls were put in by Don Borroughs and Gary Fike during 1997. The upper pitches were established by Steve Bullock and Mark Gallen years prior by other access. I climbed Brass Balls in November and found it no more or less shaded than the Spectrum route during this time of year. Depending on the time of day, both routes can be somewhat shaded by large corners. Most of Brass Balls follows speedy 5.9 ground. The first pitch, 5.10d, is well bolted at the crux which is encountered near the deck. The remainder of this pitch is relatively easy as it follows a corner to a large alcove/chimney. There is an alternative 5.7 chimney pitch to start the route over to the right. In either case, the second belay is on a large comfortable platform at the top of the chimney/corner. The second pitch (5.9) is a bit soft for the grade and contains mostly dark varnished holds with a fun traverse left move. I ventured left to place several cams in the crack, double slung them, and then moved back right to pull a small bulge to a semi hanging fixed anchor. The third pitch (5.7+) is climbed on better rock following a corner straight up and eventually traversing right to another fixed belay on a comfortable ledge. The fourth pitch (5.9) follows a decent crack up left to the top of a short chossy chimney/corner. The fifth pitch contains the best climbing and rock of the route. Pull a significant roof (5.9+) on great rock and follow the corner above to the final fixed belay. Rap the route with a single (70m) rope.

Park at the Pine Creek trailhead off of the Red Rocks loop road. Hike down the trail along the creek, past the old homestead and into the wash as it heads for Mescalito. When the trail follows the wash and meets up with the red rock band on the right, divert off the main trail and start ascending a fainter trail that leads back up and right to the Spectrum and Brass Wall areas. A deep half arch sits in the middle of almost solid black varnish on the lower wall. Another smaller arch sits below that arch to the left. These arches form Spectrum, the route itself. Big Horn and Birdland start at a line that angles left to right up the face that the before mentioned arches lie on. Two distinct chimney/seams border this face on each side. Rawlpindi, 580’, 5.7, runs up the left seam and Brass Balls, 400’, 5.10d, runs up the right side.

1st Pitch- 80’- 5.10d/ From the scant beta I could find on this route, quite a bit is made to do about this first pitch. In reality, I felt it was soft for the grade and the crux protected well, with fixed gear below and after the small roof pull as well as gear in the crack itself. Find the bolted crack to the right of Spectrum’s direct start. The bottom of this wall is undercut by ancient floods and thus overhanging. Run up the first section unprotected (5.7-8). From the second ledge, clip bolts below and after the bulge with a decent jam in between. Pull the bulge and follow the left facing corner to the top and into a large alcove/chimney formed by a leaning tower of sorts.

Variation First Pitch
1st Pitch- 80’- 5.7/ Climb the right side of the leaning tower/pillar up a wide easy chimney. Cross over from right to left once you are in the alcove/chimney to set up belay below the next pitch.

2nd Pitch- 100’- 5.9/ Even though the wall above is well varnished, it is seldom traveled and gear placements are at a premium for the less experienced leader. I chose to angle into the corner on the left to place a few pieces before moving back right to pull the steep bulge above on large jugs. A semi hanging fixed belay is just a few meters above that bulge/roof.

3rd Pitch- 80’- 5.7+/ Follow the pleasant (great rock) corner above until it makes sense to traverse out right to the base of a chimney/corner system with a comfortable belay.

4th Pitch- 70’- 5.9/ Climb the decent left hand crack up the chossy chimney/corner system. Pull through to a treed ledge above and fixed belay on the right wall.

5th Pitch- 70’- 5.9+/ This is the best pitch on the best rock of the route. I considered combining these last two pitches, but had placed (got rid of) my #5 C4 in the previous pitch. If you brought the #5 and can hold off on placing it on the fourth pitch, it protects the start of this last pitch well and thus you could combine the pitches.  I place little but the #5 on the last pitch. Work your way up the large crack  into the awesome varnished roof, protect with a #5 C4 at the edge of the large roof, chimney out to the very edge, reach up for a hand jam above and right and make a physical move out of the chimney and onto the left wall above. Follow the nicely varnished corner to a fixed belay and ledge on the left wall.

Brass Balls raps nicely with a single 70m rope. The last rap (over the first pitch) can be done out of the chimney utilizing existing tat that could be replaced soon (2013).

Single 70m rope. I reccomend a single rack to C4 #5 unless you want to combine those last two pitches in which case take a few extra medium pieces.   You don't need the 6" that Handren calls for.  I led all pitches and placed no wires. Mix of slings and draws. Helmets advised as Brass Balls is a seldom traveled route. For the most part, the route gets sun, however a few belays can be well shaded depending on the time of day you are climbing.