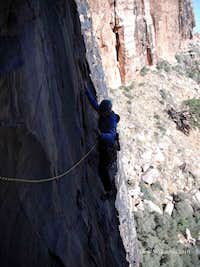 Spectrum Wall is made up of the northern climbs along the lower east face of Bridge Mountain and is thus located down Pine Creek Canyon across from the north and east faces of Mescalito (Dark Shadows area). Spectrum Wall is basically the face of an 800’ buttress to the left of Brass Wall. It is easily identified by a huge left half arch in the lower half of the wall. The lower half of Spectrum is almost all black, meaning good varnished rock on the lower pitches. Most of the routes are capped by a huge sandy roof and none of the rock above is worth trying to climb to the top of the buttress itself, therefore all descents involve a rappel. Spectrum Wall has a minimum of six published routes (2008), the most popular of which (classic if you will) is the relatively new hybrid of Big Horn, 400’, 5.8, and Spectrum, 640’, 5.11a, called Birdland, 500’, 5.7+.

Park at the Pine Creek trailhead off of the Red Rocks loop road. Hike down the trail along the creek, past the old homestead and into the wash as it heads for Mescalito. When the trail follows the wash and meets up with the red rock band on the right, divert off the main trail and start ascending a fainter trail that leads back up and right to the Spectrum and Brass Wall areas. A deep half arch sits in the middle of almost solid black varnish on the lower wall. Another smaller arch sits below that arch to the left. Big Horn and Birdland start at a line that angles left to right up the face that the before mentioned arches lie on. Two distinct chimney/seams border this face on each side. Rawlpindi, 580’, 5.7, runs up the left seam and Brass Balls, 400’, 5.10d, runs up the right side with the other four routes in between.