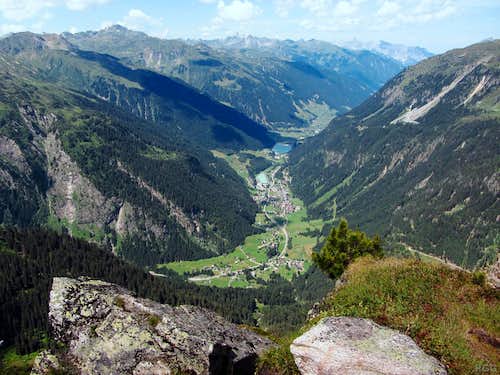 The view to the west from the summit cross. The nearby village of Partenen lies more than a 1000 m below.
The Breitspitze, or Breiter Spitz as some maps say, is not exactly the highest peak in the area, and its prominence is only about 50 meters. But its dominating position over the small village of Partenen in the Montafon commands attention, and at the same time makes it a great viewpoint. Looking down more than 1000 m, the houses of the nearby village of Partenen look like toys. And as summits go, it's a pretty easy one to ascend, with many routes and variations, attracting a lot of visitors.

The main ridge of the Breitspitze extends to the east. It's wide and undulating, although not so wide that you could get lost. About one kilometer east and some 50 meters lower, it reaches the key saddle. 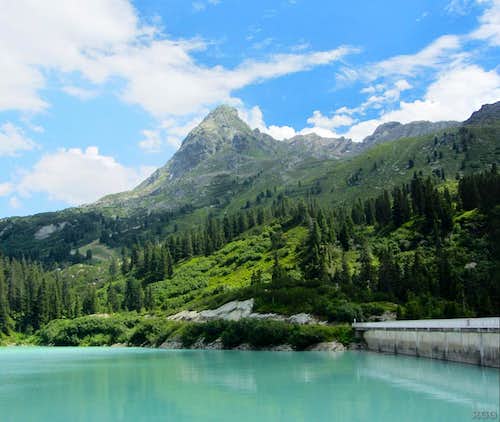 Ballunspitze from Kops. The structure on the right is the dam.
Following the ridge further east, away from the Breitspitze, the terrain gets rougher and steeper, and it isn't easy hiking terrain anymore. The ridge is now called the Saggrat, with a couple of local summits. Eventually it leads to the steep south ridge of the substantially higher Ballunspitze (2671m), which looks much more serious than the Breitspitze. Not surprisingly, there are no hiking trails up there. For those that are interested, its north face has a Via Ferrata to the summit (grade C/D). The separate descent route is easier, but still has cables and requires scrambling. 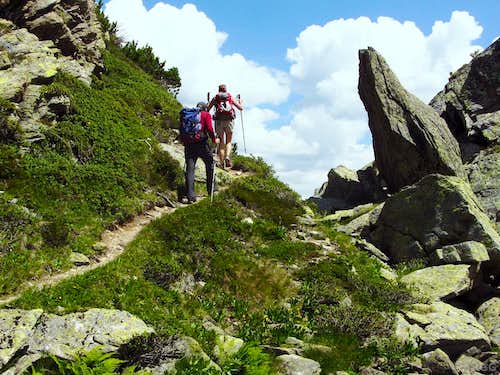 On the undulating east ridge
In stark contrast to the easy east ridge of the Breitspitze, the west face is a sheer drop, very steep indeed. To add to the sense of drama, the large summit cross stands right at the edge. Coming up along the east ridge you won't see it until you're almost there, hidden behind all the bumps on the ridge, but when it finally shows, hikers flock to it like bees to honey. And it isn't until you're standing right next to that you get to enjoy the great summit view. 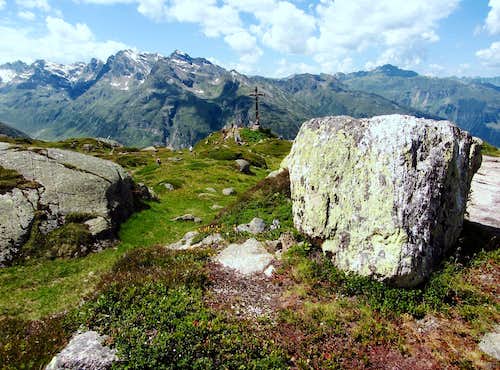 The summit cross on the Breitspitze is clearly not on the highest point - this big boulder is
Actually, to be precise, it's not quite a summit view, for the cross isn't exactly on the top. After checking out many of the bumps on the summit ridge, I determined that an inconspicous boulder, about 130 meters east of the cross, was in fact the true summit (46.9586°N / 10.0994°E). The boulder wasn't much more than a meter above its immediate surroundings, but its strategic location on one of the higher bumps elevated it to the status of highest point. There was no cross, sign or mark of any kind on it, but my altimeter concurred with my visual assessment. However, had the cross had been erected there, the summit view to the west would not have been particularly impressive, nor would the cross have been visible from the valley below. It's not uncommon in the Alps to find a cross at a good viewpoint and visible from the valley below, instead of properly marking the summit.

Near the summit, the south side is very steep too, and the north side is only marginally easier. But further east that changes, and on both sides of the ridge are a couple of hiking trails leading up to the saddle.

Northeast of the mountain lies Kops Speicher, a pretty lake. It's an artificial reservoir, serving the Kopswerk hydroelectic powerplant lower down in the Montafon.

While the ridge is above the tree line, the lower slopes are forested, and the banks of lake as well as some open areas in the forest and alongside the trails have an abundance of flowers. 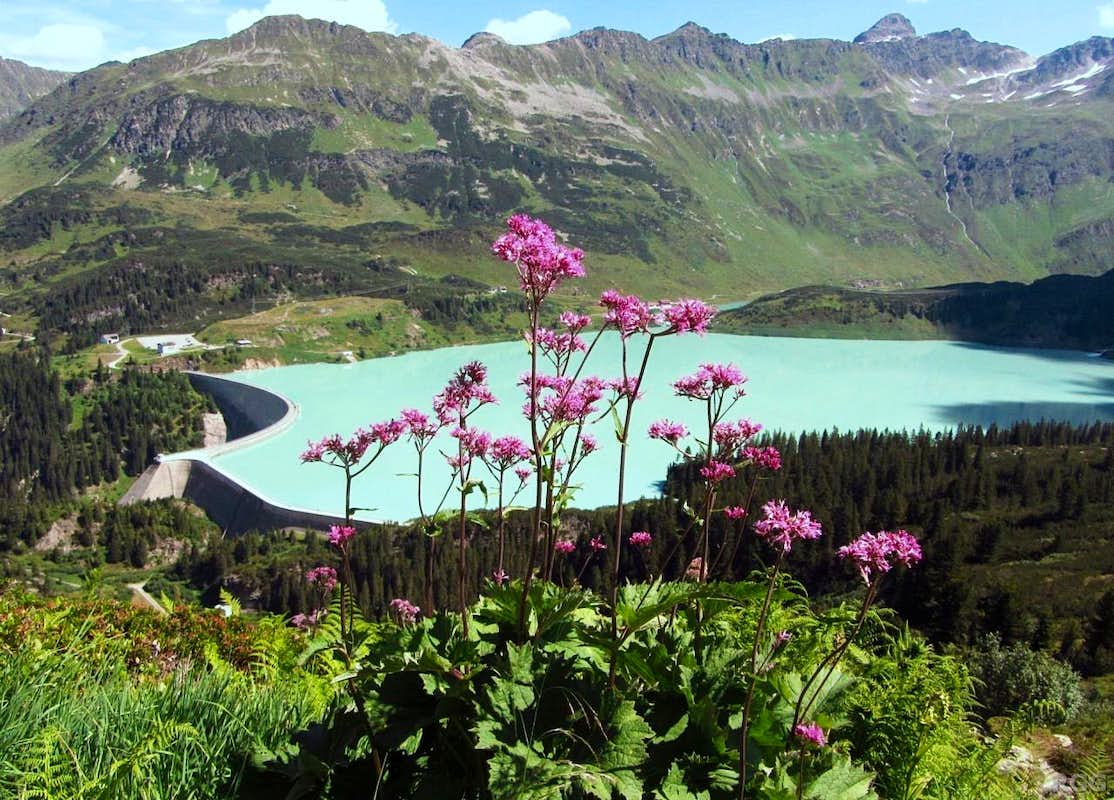 View from the slopes of the Breitspitze, with the Verwall Group on the other side

The nearest trailhead is at Kops (1855m), next to the big dam of the lake. It's at the end of a road that starts just outside of Wirl, the last settlement high up in the Paznaun valley, just above 1600m. In contrast to the small road, there is a surprisingly large parking lot at Kops. Much better known than Kops or Wirl are the nearby ski villages of Galtür and Ischgl.

Alternatively, some longer routes start in the Montafon at Partenen (1051m), or just a little big higher up the road from there (around 1100m). There is a service road from Partenen to Kops, closed for public motorized traffic, but easy to follow on foot or bike.

Partenen and Wirl are connected by the scenic Silvretta Hochalpenstrasse, going over Bielerhöhe, a 2037m high pass. This is a toll road, and because of the high pass and relatively light traffic it's not kept open all year. It shuts down sometime in the fall and opens again in spring. In 2013, the section of the road between Partenen and Bielerhöhe closed early, for road works. 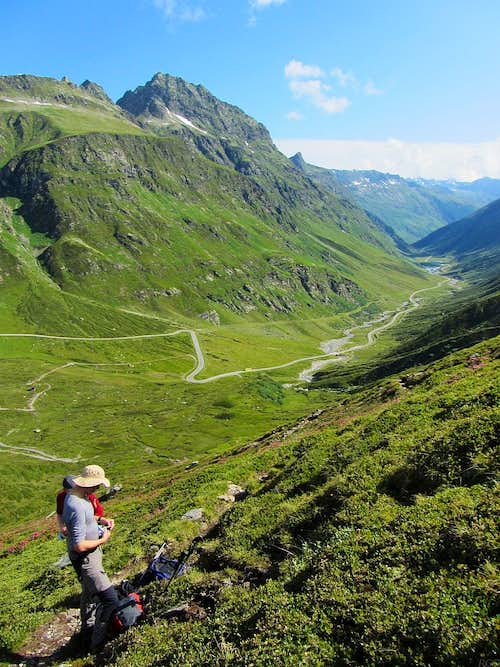 The Silvretta high alpine road from Bielerhöhe to the Paznaun valley.
The mountain is Vallüla (2813m); the Breitspitze is on the other side.
The Paznaun valley can be reached all year round from the northeast. I don't know if the road from Wirl to Kops is kept open if there is a lot of snow. If it isn't, the easy alternative is the ski lift from Wirl to the small ski area on the slopes of the Ballunspitze, and start hiking from there, traversing the gentle lower northern slopes of the Ballunspitze. It's hardly longer than from Kops. During the summer season, the lift from Wirl is in operation for hikers.

Close to the start of the Paznaun valley lies the city of Landeck. Frequent public buses from there service the Paznaun valley. Some of them go up to Kops Speicher as well, shortly after crossing over the Zeinisjoch (1842m). The bus stop is one kilometer east of Kops itself and there is an easy trail along the shores of the Kops Speicher. In fact, you can easily stroll all the way around the lake.

Partenen can be reached all year round from the northwest. Near the western edge of the Montafon lies the city of Bludenz.Landeck and Bludenz are well connected by motorway and by train.

This region of the Alps has relatively few roads. Especially when coming from the south, you may already be close, but if you travel by car you still have a long drive. For example, Klosters, Switzerland, is less than 20 km away to the southwest, yet by car it's a 3 hour drive.

To get to Partenen, the shortest and quickest option would be the long western detour, around Liechtenstein.To get to Kops, if the Hochalpenstrass is open, continue from there over Bielerhöhe. If it is closed, the western detour gets longer still: Instead of leaving the motorway at Bludenz, continue east to the start of the Paznaun valley just before Landeck.

Alternatively there is the long eastern route, via Italy, over the Reschenpass to Landeck and then up the Paznaun. Which route is faster depends on where exactly in Switzerland you come from.From Germany, in the north, it's not quite as bad. Bludenz can be reached conveniently over the Autobahn all the way from Germany. Landeck is close to the Fernpass, an important north-south connection in the Alps, but unfortunately not an Autobahn. This route is rather susceptible to traffic jams; by commercial vehicles during the week or by holiday makers during weekends. 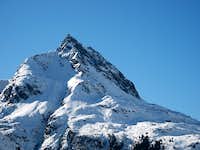 Ballunspitze in winter from Galtür
There are plenty of places to stay in both the Montafon and Paznaun valley. In winter these are popular ski resorts. That also means that outside the ski season it's not hard to find something if you simply show up.
The nearest place to stay to the Breitspitze is near the Zeinisjoch, where your options include a campground and a hotel.

Open Source map of the area showing the many trails
From the key saddle, it's about 15 minutest to the top. There are two trails on the ridge, which join shortly before the summit.

All the hiking trails first have to gain the ridge, at or near the key saddle. There are four of them, and if you consider the many junctions further down, there are numerous routes and variations. I'll mention the main ones. 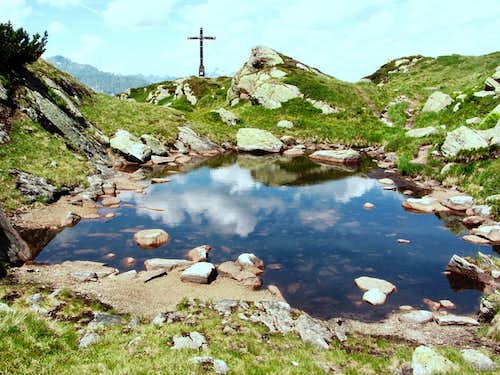 Even close to the summit there was water on the broad, undulating east ridge 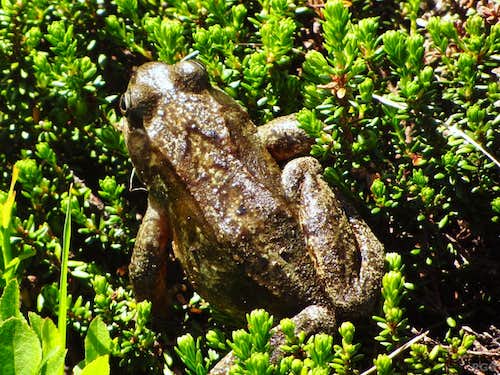 This toad lived near one of the ponds high up 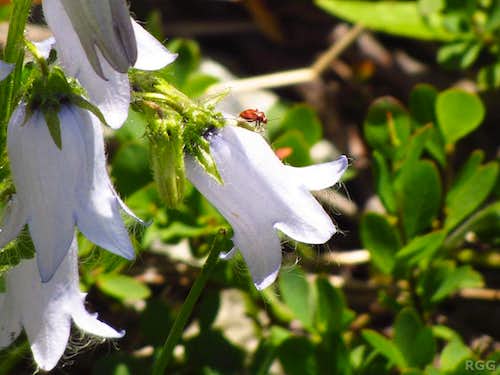 Ladybug on Campanulla alpina - on the slopes of the Ballunspitze, not far from the lake
Galtür
Montafon