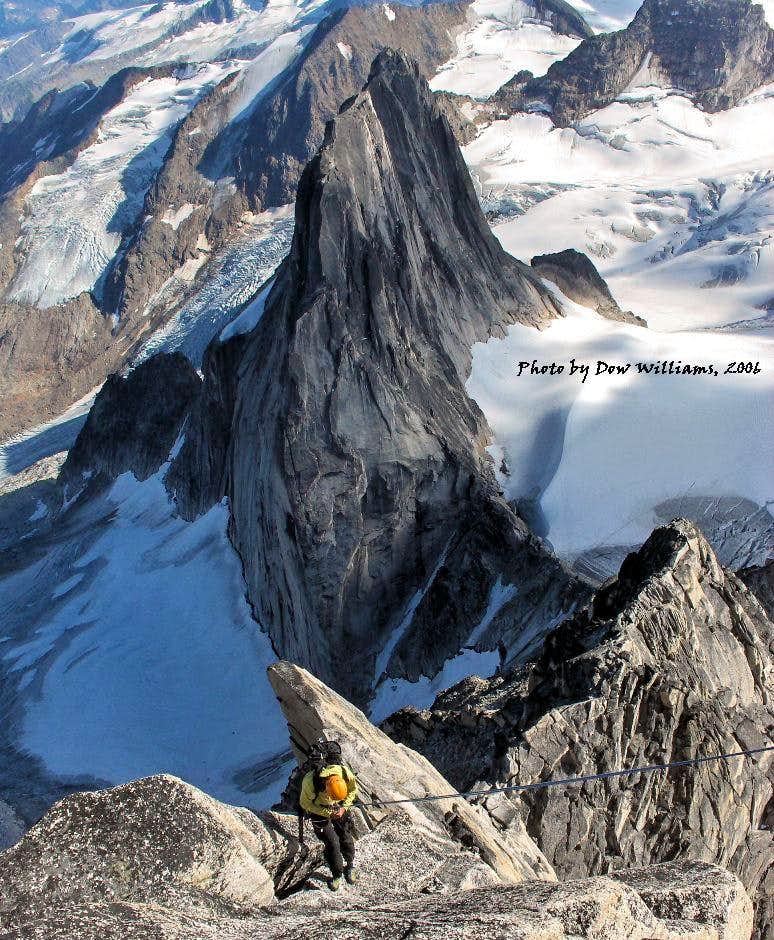 This photo will be published in a new book to be released next year regarding classic climbs. I have added quite a few Pigeon and Snowpatch Spire photos along with a page for Pigeon, but this is a rappel we were doing on descent of the NE Ridge of Bugaboo Spire, IV, 5.8. A photo was requested of the climb and I had tons of ascent pics en route and one of my partners on the climb told me he thought this was the best pic of the bunch even though I had already cataloged it and thus it was not in consideration. The more you study it, the more it grows on you. I am usually not that fond of rappel photos. Just one of many raps down the Kain route which you use as your descent from the NE Ridge route which is one of the 50 North American Classics. This has become such a popular route, by Canadian standards, I could have sold coffee and donuts at the start of the climb and made a small fortune this day. Bugaboo Provincial Park, August 25, 2006.
« PREV NEXT »

Very nice photo!!I attached it into the album "views to keep...".
But I don't like the position of signature,I would rather see it in the corner...it's my opinion...
Still great photo!
TA

I want credit for being the rappeller! :-) Just kidding Dow, as I previously said, it's my favourite picture out of the hundreds, I'm really glad you submitted it somewhere.
Also small correction, it's the Kain route (Conrad Kain, not Kane). Pretty sure it's the first rap off the top.

What kind of camera/lens did you use? I like the somewhat distorted effect.

That's some wild stuff out there! So very cool.

Congratulations on the book photo!

My friend's harness had a component that broke with a sudden SNAP! when he was on this rappel. It was okay, but we all had our hearts in our throats!

Thanks. Todd Skinner was not so lucky. They do need to be replaced once in a blue moon. A cheap piece of gear for what they do.

Thanks Jeff...you take as many as I do, you get lucky once in awhile...cheers

That picture looks very similar to the one on Mountaineering: Freedom of the Hills 7th Edition.

I think its one of my fav pictures. The high Alpine feel, airy, cool and clear. Good rock, and an overall great feel. Boy do I wish I was there. (and could take a pic like that)Thanks.

Thanks John, taking photographs in the Bugs is like shooting fish in a barrel, it is such a majestic place...cheers

Probably my favorite picture on this entire site

thanks, ironically heading back into the Bugs this next week....Cheers