Bugaboo Spire, and the rest of the Bugaboo Group, are legendary for steep, clean, solid granite, high above easy glacier approaches. Views of and from the mountain in any direction are gut-wrenchingly beautiful.

Most climbers ascend either the Kain route (III 5.6), up the S. ridge from the col that divides Bugaboo from Snowpatch Spire, or the NE ridge (IV 5.7) from the saddle that connects Bugaboo to Crescent Spire. Randal Green and Joe Bensen's Bugaboo Rock lists one easier (5.4, 2,000 feet / 600m), and seven harder free and aid routes, all of which see much less use.

“The Bugs” are a subrange of the Purcells, in eastern British Columbia. A long, deep, glacier-carved trench separates the Purcells from the Rockies. In that valley run the headwaters of the Columbia River and BC Highway 95. Drive Hwy 95 76 km south from Golden, or 27 km north from Radium Hot Springs to a dot on the map called Brisco. Head west across the valley (The whole valley floor is a magnificent swamp here; there's only one road to choose from.), then north a bit, and into the Purcells. The road is a logging mainline, signed for Bugaboo Glacier Provincial Park where needed. 45 km gets you from Brisco to the parking lot in sight of the Bugaboo Glacier. Ignore the spur left to the lodge about 2 km before the end. Cars at the trailhead (5,000 feet / 1500m elev.) are wrapped with chicken wire at ground level; porcupines love to munch rubber! I've always found rolls of chicken wire that others have left, but smarter people will bring their own. Spend a few hours hiking, first in cool forest, then steeply to Conrad Kain Hut, (7500 feet / 2300m), and Boulder Camp, just below and west. An additional 500 feet (150m) up the moraine to the right is camping on the flattopped Applebee Dome, 8,000 feet (2440m). From Applebee Dome, continue up and skirt the right-hand edge of the Crescent Glacier. Cross it directly to Bugaboo-Snowpatch Col (9,000 feet / 2740m) to start the Kain route, or for the NE Ridge, hike to the head of the glacier and climb Class 3 to the saddle, then left and up to the prominent ledge that forms a chevron across the ridge.

Maps: Bugaboo is at the north edge of Canadian National Topographic Series Map 82K/10 (Howser Creek). You'll also want 82K/15 (Bugaboo Creek) to cover all the surrounding peaks and hiking approaches. Books: The aforementioned Bugaboo Rock (The Mountaineers, ISBN 0-89886-233-7) is a terrific reference and an entertaining read. Robert Kruszyna and William Putnam's Climber's Guide to the Interior Ranges Of British Columbia South (the AAC and the ACC, 1977) is a smaller volume covering a much larger area. The NE Ridge of Bugaboo Spire was featured in Steve Roper and Allen Steck's Fifty Classic Cimbs of North America.

Breaking up the drive

I live about an hour N of Seattle, WA. If we leave home at dawn we can reach the trailhead before sunset. Trouble is, the ground there is not conducive to camping, nor are the ground squirrels and porcupines. If your timing isn't right for heading straight up to the hut, consider the municipal campground on the E side of Golden, BC. It's right on the S bank of Kicking Horse River as it comes barrelling out of the Rockies. The campground is basic, fairly cheap, and across the street from the municipal swimming pool.

No permit or fee is required for driving to or parking at the trailhead, but you'll pay to camp or stay at the hut. See Camping, below. There are no supplies, food, gear, or phone or garbage services available in the park. One year I found a roadblock outside of Brisco: the area was closed to camping due to fire danger. I got past by explaining I'd be camping far above timberline.

Winter ascents have been made in the Bugaboos, but someone else will have to tell about them. Weather and avalanche conditions make the most reliable climbing season from mid June through September. The Bugaboo-Snowpatch Col, a major avenue of approach or descent for many climbs is guarded by a bergschrund on the east (Crescent Glacier) side. (See the cover of Bugaboo Rock.) Passing the schrund is dicey in late summer (A climber was swept into it and killed in Aug. '84), and it's been getting worse over the years. Weather is probably best in July. Pre-dawn starts are recomended on long, popular routes to beat the other climbers in the morning and the thunderstorms that often hit in the afternoon.

As of September, 2012, camping at Boulder Camp or Applebee Dome runs $10 per person per night. Kain Hut costs $25 per person per night. Both are administered by the Alpine Club of Canada (ACC) and payable at the hut. In the past I've enjoyed spectacular camping at Bugaboo-Snowpatch Col, but check with the ACC or BC Provincial Parks (here) to see if that's still allowed. The cute, furry critters around your camp are Columbian ground squirrels. You'll think of other names for them when you return from climbing to find they've eaten through your tent. Come prepared to hang all your food and garbage away from the tent. The Kain Hut (Some hut! Three-story tongue-and-groove cedar, sleeps 50, has full-size kitchen sinks & stoves.) is open June 1 through Sept. 30. Bring your own food, sleeping bag, and pad. Reasonable rules for sanitation, safety, and courtesy are posted at the hut and (here) Any foreign languages you know may come in handy at the hut. 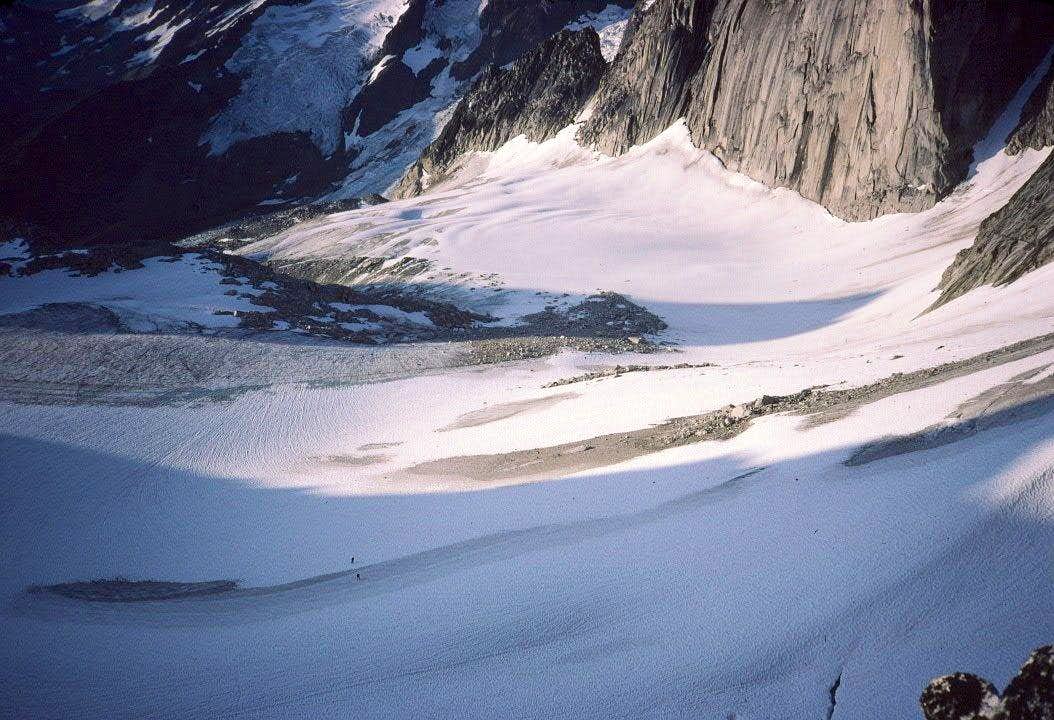 The Crescent Glacier, approaching either of the popular routes on Bugaboo, is so flat that almost nobody ropes for it. People have been unpleasantly surprised though. The western part of the lower Crescent is heavily crevassed. Don't venture toward Snowpatch when descending the glacier. I've never needed crampons in five June and early-July trips. Later in Summer may be a different story, and there are opportunities for technical ice for those who pursue it.

The Kain route is the standard descent. If you climb to the main (N) summit, you'll drop and traverse to the S summit, then start down the Kain route. At the gendarme pictured in this photo rappel to the East. The Kain route traverses up from the west side, but rappelling this way will leave you hanging over the W face. Once you reach the Bugaboo-Snowpatch Col, your only obstacle should be the bergschrund across the slope down to the Crescent Glacier. Late-season climbers may be forced to downclimb or rappel rock on the Bugaboo side, but that's loose, with bad anchors. [If you have an update on the 'schrund and how to pass it, please let us know.]

In February of 2010, builttospill provided this update: Massive rockfall in July or August of 2009 made descent from the Bugaboo-Snowpatch col more sketchy than usual. Some folks still descended that way, but we chose to go around the backside of Snowpatch using the "Snowpatch rappels" from the col. This took somewhat longer, but was a lot safer and may end up becoming the standard descent eventually.

August, 2012, bearbnz reports that a bolted rappel line has been established down the east side of Bugaboo/Snowpatch Col to the Crescent Glacier. They found enough snow to descend directly, without resorting to the rap line, but 2012 was a heavy snow year. When I get coordinates of the top rap anchor, I'll add a link to a mapper.acme.com view.

I had the toughest time finding the correct location for photos on and near the summit when I submitted them to Panoramio for inclusion in Google Earth. It turns out that the satellite shot was taken from west of the mountain. The twin summits appear to stretch 'way over the Crescent Glacier, which, in turn, extends almost to the top of the mountain.

Google's computers know the shape of the terrain, so they compensated by folding and stretching those two small pyramids about 350 meters down the E face, dividing the glacier.

Thanks. I put that info in the caption for this photo but you're right, it belongs in the main description.

Right, I didn't see this picture and the caption...

The second rappel is down the east (back) side of the gendarme and not the west side, even though this looks like the logical line of descent. Failing to do so will force you to pedulum back to the ridge or even worse, rappel down the entire west face.

Thanks. I put that info in the caption for this photo but you're right, it belongs in the main description.

Right, I didn't see this picture and the caption...

Massive rockfall in July or August of 2009 made descent from the Bugaboo-Snowpatch col more sketchy than usual. Some folks still descended that way, but we chose to go around the backside of Snowpatch using the "Snowpatch rappels" from the col. This took somewhat longer, but was a lot safer and may end up becoming the standard descent eventually.

Damn. Thanks for the update; I'll add it to the body of the page. Your user page says you were busy last year, knocking off what for me were several highlights of 20+ years of climbing. I'm jealous, but in a good way.

Ha, thanks! Yeah, I guess I was pretty lucky last year. Lots of good weather when we needed it. But I also had the good fortune of being a "student" last year and had the summer off, a girlfriend who was fairly understanding, and an experienced partner who is patient with me. So....I really can't take any credit for any of it. These pages are phenomenal, by the way. They were my original motivation for going to the Bugaboos when I saw them ~3 years ago. So thanks for that!

Camping at Boulder or Applebee is $10 per person per night, and $25 per night at the Kain hut. There is also a bolted rap line down from the Snowpatch-Bugaboo Col, along the east side. It was not necessary to use it when I was there, the bergschrund was mostly covered.

Just updated both sections - thanks. If you'll get me lat/long of the top of the raps, I'll include a link to a map in the Descent section. Here's a start - slide the map or photo under the center crosshairs to line up with the top anchor, and copy the lat/long from the box below: http://mapper.acme.com/?ll=50.73944,-116.78660&z=17&t=S Note that the photo of the summit of Bugaboo is shaped all wrong, because the satellite was too far west, and the the interpreting computer smeared the whole summit pyramid down the east face.