The Cabezón de Oro (Cabeçó d'Or in Valencian language) - meaning Gold Head - is a beautiful mountain located in the Costa Blanca, Alicante province (Spain, Comunidad Valenciana), a few kilometers to the North-East of the town of Alicante. It belongs to the Cordilleras Béticas and is probably the most significant mountain and one of the most frequently climbed in the province of Alicante. Its imposing shape, visible from across the region with its intricate orography furrowed by ridges and spurs, is the hallmark of this area and the backdrop of the Mediterranenan sea.  Its height is 1209 m / 3960 ft above sea level and its orientation is North-South. Because of the calcareous substrate and the groundwater in this mountain abounds the subterranean complex, like the beautiful Canelobre Caves.

Despite of the Spanish names commonly used, Cabeçó d'Or, Cabezo de Oro or Cabezon de Oro, its real name should be Cabezo de Agua (Water Head) due the great amount of groundwater flowing inside it (Cuevas de Canelobre). So the origin of the name of this mountain would not be given by gold, but by water. A probable version argues that the Iberian place name UR (water) come confused with the Valencian OR (gold), giving rise to an unsuccessful search for the precious metal in the mountain, with the opening of various mines. Because of the calcareous substrate (like everywhere in Alicante) and the groundwater, in this mountain abounds the subterranean complex, like the beautiful Canelobre Caves.

The “Cabezón de Oro” with its 1209 meters is situated among the highest peaks in the Costa Blanca region. The whole range offers great views towards the coast line between the “Sierra Gelada” to the East and Alicante to the West as well as towards the mountainous back country with its main peaks “Aitana”, “Puig Campana”, “Els Plans” and “El Cid”. It is also know for its craggy rock formations as the Pared de los Alcoyanos.

The whole area is an interesting spot not only for climbers, but also for hikers. Almost all of the routes goes by the south face, perfectly visible from the nearby town of Alicante. El Cabeçó d'Or combines magnificiently some tracks of hiking, a few routes of sport climbing and lots of routes of traditional climbing.

Take the A-7 highway to exit 67, N-340 and CV-773 to Busot. At the roundabout before Busot take the signposts to the Cuevas de Canelobre (Canelobre caves) until a bend with a wide parking to the left (Lat 38.5161 / Long -0.4141) with the routes information signpost next to it. If you continue to follow the road you will find the Canelobres caves in about 400 m, but here but parking is difficult.

The Canelobre Caves are located inside the Cabeçó d’Or South face at an altitude of 700 m. and show one of the most spectacular vaults in all of Spain, about 70 meters high. There is evidence that they were discovered by Muslims in 740 AD.  Morphologically, it seems like a great modernist cathedral with lots of stalagmites and stalactites that mimic the most varied objects (chandeliers, the elephant head, the centurion helmet, the jellyfish…).  They are sound and lit artificially and can be visited. Because of its excellent acoustic, the caves are used for holding concerts. During the Spanish Civil War they are used as aircraft engines or weapons factories.Inside are the Canelobre Caves, which have one of the most spectacular vaults in all of Spain, about 70 m. In addition to its geological and tourist interest, the caves have been used numerous times for concerts taking advantage of its magnificent acoustics.

Summit altitude: 1209 m
Difficulty: EE
Difference in level: about 820 m
Other info: the ring and the climb to the top is marked with the marks of the PR-CV 2 trail

There are two Normal routes to reach the summit of Cabeçó d’Or, both advisable and worthy. The two routes are both starting from the same parking lot and can be combined perfectly to make a profitable ring in the heart of the mountain, with the option of climbing its summit, an excellent viewpoint.  We will do all this following the  small path PR-CV 2. We start from the parking lot near the Canelobre Caves. The itinerary may be done in both directions of travel, but the best solution and highly reccomended is to take the circular route in the anti-clockwise direction. Start by walking along the road upwards in the direction of the caves, where we find a small square with picnic tables. From there we follow a path that descends with several hairpins and leads to Pla Cabeçó, losing about 100 meters in altitude. Successively we will gain height walking among repopulated pines.

The path climb up to the Coll de la Castellana. Bend after bend, we are gaining height. We keep climbing, until we see above us a couple of very striking rocks, the Penya del Frare and above the Penya Redona. When we are under the Penya del Frare, after passing through a natural “viewpoint”, the road changes rhythm: the climb is smoothed and we move practically flattening towards the interior of the mountain range. We pass under the Penya Redona,  going up slightly. Before reaching the col where the Polset House is located there is a steep stretch of the path. The house is located in a wide hill at about 950 m of altitude and here it starts the final climb to the top. Here it's also possible to decide whether to climb the top or continue on the circular ring without do it. However, it is a pity not to climb to the top.  From the Polset, we begin the ascent towards the summit. The path heads to North and there are many small variants, although in the end they all converge the same place. We cross a zone of scree with steep slopes. We reach a section where to walk skirting the base of a rocky wall on a large rocky ledge.

From the Polset, we begin the ascent towards the summit. The path heads to North and there are many small variants, although in the end they all converge the same place. We cross a zone of scree with steep slopes. We reach a section where to walk skirting the base of a rocky wall on a large rocky ledge.Shortly after, a step awaits us where it will be necessary to use the hands.

Very jokingly it is the so-called "Hillary Step", which has recently been equipped with iron steps. We pass by a kind of chasm and a rock section where it will be necessary to use our hands again, just after which we reach a saddle on the ridge of the mountain. From here turn to left and follow the ridge of the mountain, getting the ruins of Casa del Compte. Only a few steps separate us from the coveted conquest. Finally, we reached the summit signal of Cabeçó d’Or. The view is impressive!

From the summit we reverse the same itinerary to the Polset House. A few meters before arrive at the house we turn to right to take the return route across Racó de Seva. We begin the descent along the path with several hairpins and taking us to Racó de Seva, passing by the impressive Esquenall de l’Ase.

From there, just follow the dirt road to return to the starting point, ending this beautiful and demanding hiking trail.

There is also a Via Ferrata on the mountain. More information here: cabezon-de-oro

Due to nesting birds, this mountain has a restricted access. In fact climbing is banned on most sectors from 1st january till 30th June.

The nearest campings are located in Playa de San Juan (Alicante). Free camping is not allowed in Comunidad Valenciana.

The climate we can enjoy in this area is typically mediterranean, with lots of sun and a few cold/rainy days in the year. Sometimes we can find snow, but it's very rare. 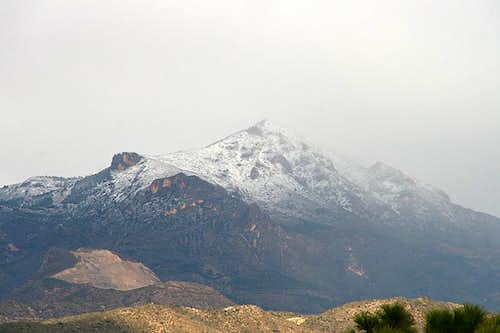