This page was created by Figurenine in 2010.  In May 2020 he graciously allowed me (Stu Brandel) to adopt the page and update it.

Carlton Peak rises 924' above Lake Superior, making it one of the taller points on the edge of the lake. As part of the Sawtooth Range, it offers supreme views of the lake and the surrounding area. A nice short day hike suitable for any season. The peak is located in Temperance River State Park, and the Superior National Forest.

There are three good choices for a hike ending on Carlton Peak’s summit dome, each with its own character.

The longest option (3 Miles one way) with the highest elevation gain (about 850 feet), it also has the most scenic approach.  Its first mile goes along the eye-popping Temperance River, which is funneled into a series of torrents that blast and leap their way through a purplish red anorthosite canyon.  It alone would make a fine hike.

Once you get upstream a mile, the river seems to settle down into a wide set of flat rapids.  Your trail (marked by the blue blazes of the Superior Hiking Trail) will bend northeast toward the still unseen Carlton Peak.  The river will spasm into another large set of falls (now hidden by a screen of trees but loud and still accessible on the left if you wish to check them out), and then the river will drop further away as you begin to slowly ascend a good dirt trail through a mostly birch forest.

The forest is OK, and maybe welcome in summer, and as you ascend you may be briefly fooled by two rounded rises ahead of you  - smaller hills you will skirt (hill 1) or ascend over.  As you surmount the second hill, there is a short spur trail on the left that will show you some of the ground you have just covered.  But ahead of you you will start to glimpse through the trees the rocky mass of Carlton Peak.

The trail now steepens and gets progressively more and more rocky, and you will come right up to the rock fortress that makes up most of the top of this mountain.  You will climb and move around to the right, finally then reaching a ‘pre-summit’ register where the trail from Britton Peak to the north (see Option 2 below) joins you.  A short trail past the register leads one to the large convex summit, with several rocky viewing areas nearby.

Do this route to blow the doors off your eyeballs if you or someone you know is new to Minnesota’s ‘North Shore’.

Getting there – Option 1:  Park right off Highway 61 near milepost 80 at the well signed Temperance River area.  The trail head is east of the river’s bridge, so park there if you can.

This option is the most popular since it is short (1.5 miles or so one way) and has a long gradual climb (about 320 feet total).  While it has no where near the star power of the Temperance River gorge, it has two great assets besides its ease.

The first advantage is right at your starting point.  Britton Peak has a small trail that starts in the same parking area, and it is well worth hitting this prior to the main trail to Carlton.  It is only 0.3 mile long one way and rises maybe 100 feet, but it makes up for its size with a fine rounded rock summit which overlooks nearly the entire route to Carlton, as well as regal Lake Superior.  It is definitely something worthwhile.

Come down and find the other trail head to Carlton Peak (be careful, there are several trails that begin in this lot).  On the main trail to Carlton, you will first cross Route 2, and then the long flatish trail (dirt and board walks) through the woods begins. It is not very interesting, though I heard something large moving through the birches once, and two hikers I met near the summit said they saw 2 Moose in the trees on their way up.

The second advantage this route has occurs once the woods walk ends and the trail bends around the lichen covered walls of Carlton’s rock sides.  A side trail on the left to Ted Tofte Overlook (aka Tofte Peak) should definitely be taken.  Its wonderful open dome (only 100 feet or so less than Carlton itself) gives stupendous views in all directions, not least of Carlton itself.  In fact, even those that do Option 1 above from Temperance should go down and check out the Tofte overlook.

Once back from the Tofte Overlook, it is only a short walk to the summit register, with the summit trail just before it.

Getting There – Option 2:  In downtown Tofte northeast of the Temperance River park, turn north on County Route 2 (Sawbill Trail).  After 2 miles and a couple of bends, the Britton Peak parking area is on the right.  There are several trailheads that start there, but all are well signed.

The approach might actually be harder than the hike. When I (Figurenine) climbed the peak in May 2010, I drove up to a trailhead on a dirt road on the south side of the peak. From the south, turn left on to a dirt road .8 miles past the bridge over the Temperance River. At .3 miles in stay right at a Y, and stay on the road (passing a gated road on the right about .7 miles in). After passing some signs saying you've entered the State Park, you get to an old quarry where the correct path becomes confusing. Basically, keep going up until you can't anymore, staying on the road that seems the most traveled. The road is quite rough in some spots, one guidebook said for high clearance vehicles only, but I did it in a minivan. After a storm, however, this may be a lot trickier. The trailhead is marked by a latrine and a signpost (not the latrine in a lower heavily quarried area). 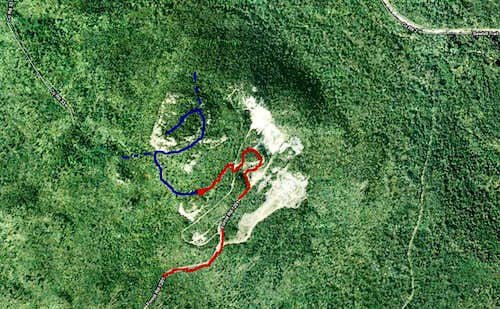 From this trailhead, it is a pretty easy half mile, 300' gain, hike up a decent trail to the top.

Notes from 2020 – The gravel road is unmarked by the State Park.  It is still a bit iffy for anything but a high clearance vehicle, but a great view appears of Carlton Peak at one point.

One trail up from the quarry parking area leads quickly up to the saddle between the Tofte Overlook and Carlton Peak.

The peak is inside a state park, so if you want to park inside the park, its $7 for a daily pass.  I think you do not need a day pass if you are parking along Route 61.

While the hike to the top is a fairly easy class 1 hike, there are many class 5 climbing routes on the West and south sides of the peak.

The rock here is anorthosite and abraisive.

The only guidebook in print for the area is Rock Climbing Minnesota and Wisconsin, by Mike Farris. The guidebook has some nice pictures for finding the right route.

The entire North Shore region is a chalk-free zone and climbers should abide by this. Also, a free climbers permit is required, and can be obtained at the state park office.

The best book on Minnesota's North Shore hiking is Andrew Slade's 'Hiking the North Shore'.  Highly recommended if you are in the area.