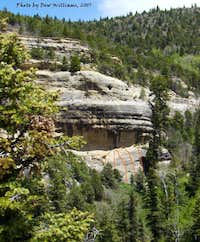 Cedar Canyon Crags is a limestone climbing area located east of Cedar City, UT, along Highway 14 before Cedar Breaks National Monument and Brian Head Ski Resort. It is comprised of three main crags, Graveside Matter, Cetacean Wall and the 10 Mile Wall. As of 2007, there were 23 published routes with many more already completed, but yet to be published. The whole area was a late bloomer, not really established until the mid to late 90’s. The rock is a light airy, but highly compacted limestone that lacks the adhesiveness of sharper limestone but is easier on skin via a lead fall. 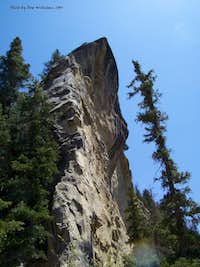 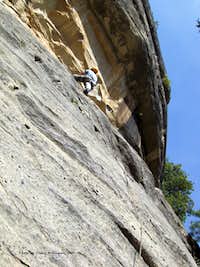 Cedar Canyon is home to the “Hurricane Fault” line. The Hurricane fault extends from Cedar City, Utah, to south of the Grand Canyon in Arizona, and is the longest and most active of several large earthquake faults along the boundary between the Colorado Plateau and Great Basin Desert. The Utah Geological Survey considers the Hurricane fault active and capable of generating earthquakes in excess of magnitude seven. The history of the Cedar Breaks area is quite immense, it is said that you can drive through a hundred million years of rock history during the course of five miles.

Graveside Matter is the first crag area you come to in Cedar Canyon east of Cedar City (9 miles) and is on one of two access roads (High 14) used for the extensive Brian Head climbing/ski area. There are eight published routes at Graveside Matter and an additional six routes I counted in 2007 for a total of at least 14, the most unique of which is the arête (The Adventure Climb, 5.10-photo) towering over the left side pullout on Highway 14. The majority of these routes are slab routes on compressed, but soft, (won’t find many trad features) limestone which forms many of the vertical surfaces of Cedar Canyon Crags. The whole area has an alpine flare, with large conifers, running water and lush forest growth. Graveside Matter itself was actually named after a rappelling death in 1996 during the time this climbing area was developed. Quite a few routes were added since Todd Goss published his most recent guide book in 2006, thus this area is still being developed. There is one aid route believe it or not, that turns into a decent trad crack, so bring your gear.

Cedar Canyon Crags offer the same respite that West Cedar Crags offers, cooler temperatures at 6200’ versus the searing heat that can exist in Saint George an hour to the south. The rock however, ten miles east of Cedar City (fresh water limestone) versus 10 miles west of Cedar City (rapidly cooled volcanic ash), is completely different. However, both are somewhat soft in texture. 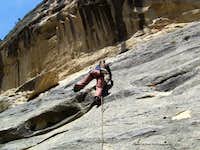 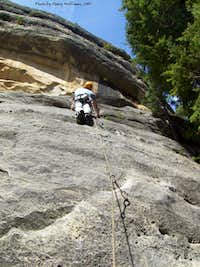 Listed as you Approach Them, West to East

Graveside Matter is located just beyond the 9 mile marker on the left side of Highway 14 east of downtown Cedar City on your way to Cedar Breaks National Monument and/or Brian Head. There is a pull off on the left and “The Adventure Climb” is the obvious arête (photo) looming over the highway on the left. The Cetacean Wall is across the road about 100’ further west down the road. Follow a trail as it crosses a stream above a pool and follow it to the wall in short order. Ten Mile Wall is (you guessed it) located further up at the 10 mile marker. Park on a pullout on the right and the wall will be in view, about a 5 minute hike.

The BLM manages nearly 22.9 million acres of public lands in Utah, representing about 42 percent of the state. The regulations regarding most BLM land are fairly wide open compared to State and Federal parks. It appears you can camp and climb in this area at will. Pit fires are highly discouraged if not illegal but you see one right at the pullout below the Adventure Climb.

At 6000’+, climbing in the winter can definitely be too cold in this region. But of course that means that Cedar Canyon and even further up the road, Brian Head, serve as great escapes from the searing heat in the spring and summer if you are camping out in southwestern Utah.

The National Forest Service maintains a campground 12 miles up Highway 14 from Cedar City. Cedar City has several private campgrounds and quite a few newer hotels. Country Aire RV Park Campground is located at 1700 North Main. They are open all year and have 18 tent sites, a ton of trailer sites, flush toilets, showers, etc. Cedar City KOA claims to be the #1 KOA rated campground in Utah and is located at 1121 North Main. The National Forest Service operates several campgrounds in the Markagunt Plateau area, but they are only open during the summer.