At 7100 acres Snow Canyon State Park is one of the best kept climbing secrets in the southwest. While hoards show up at certain seasons to crowd the Red Rocks scene in Vegas, during the same time one can find themselves to be the only climbing party in Snow Canyon. This observation despite a local guid book listing 86 published routes in Snow Canyon, most of them multi-pitch trad routes. I have been visiting this area for years.

Snow Canyon State Park rarely receives any snow and was actually named after early Morman settlers Lorenzo and Erastus Snow who engraved their names on several of the arches in the park in the late 1800’s. The park has something for everyone featuring 12 trails that show off petrified sand dunes in the south end to lava flows in the north end. Horse riders and road bikers (paved trail goes through the park) make regular use of the park as well. The lone campground in Snow Canyon State Park is second to none in my opinion.

What makes Snow Canyon seem larger than it actually is, is the fact that it is surrounded by the Red Cliffs Desert Reserve, a 62,000+ acre scenic wildlife reserve set aside in 1996 to protect the desert tortoise among other sensitive desert species. Red Cliffs Desert Reserve is the cornerstone of three separate and distinct ecosystems, the Mojave Desert, the Great Basin, and the Colorado Plateau. Due to this unique merge, several endemic species, those which can be found no where else in the world, are found in the reserve.

Mike Anderson, Matt Kindred, Ron Olevsky and John Tainio started establishing routes in Snow Canyon in the late 1970’s. You will find plenty of dated pitons as evidence. Snow Canyon became involved in the late 1980’s ethical battles regarding sport versus trad and Utah State Parks finally imposed a moratorium on the installation of new bolts in 1994. In 1998 a more reasonable plan was put in action and now there is a process in place in which you can apply to the Parks to establish a new bolted route if you so desire. As you can imagine they are pretty picky and that is a good thing. 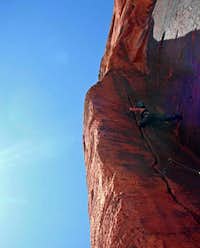 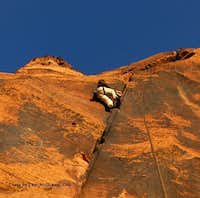 Snow Canyon State Park is made up of six distinct climbing areas:

Johnson Canyon- Two of the better trad routes in Snow Canyon State Park are located in Johnson Canyon. Both are Ron Olevsky routes and neither are in Todd Goss’s local guide book. Few have climbed these routes but they are both in great shape in terms of offering clean rock and with solid rap anchors. The obvious one is named Highlander (5.10d) and is the single pitch that ascends the popular guided canyon descent at the dead end of Johnson Canyon. An even better route is Trouble No More (5.10b). This is a two pitch route located directly across from the Johnson Arch itself.

Hackberry Wash- 8 routes from 5.4 to 5.11a. Hackberry is the warmest section in the winter and probably one to avoid altogether in the summer. No real multi pitch stuff, but you can combine a few routes through a big ledge. Area closed from March 31 through June 1 for nesting raptors.

Island in the Sky- 64 routes from 5.5 to 5.12b. There is no question Island in the Sky is the mainstay of the area. It is a significant piece of rock (small mountain) situated at the south end of the park that is broken down into eight different sections itself. In the winter it keeps you busy when many of the other spots don’t look so inviting. The “walk off” to the north is better done as a three station rappel. Island in the Sky features many multi pitch trad routes, but has sporty areas as well where you can do single pitch after single pitch. There is a great mix of trad and fixed pro routes from south to north. You climb the west wall of the island but it sports routes on its southern end as well that get even earlier sun. This is not to be confused with an objective of the same name in Canyonlands National Park.

Balkan Dome- 2 routes at 5.8 and 5.11d. This is a stand out dome feature on the left side of the road across from Island in the Sky.

West Canyon- 5 routes from 5.8-5.11c. Closed from February 1 through June 1 for wildlife purposes. The longest approach to a climbing area in Snow Canyon to access featuring a mile approach and a 7-pitch route called “The Cheese Stands Alone”, 5.11b. 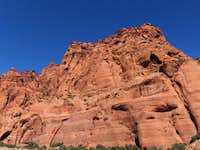 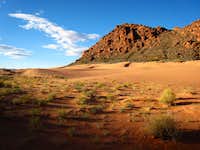 Whiptail Trail - 6 miles. Easy. Level with some slopes. Accessible to physically challenged. Tucked along the canyon bottom, this sinuous paved trail is suitable for walking, jogging, and biking.

Johnson Canyon - 2 miles. Easy. Level with some rocky slopes and steps. Leading to a sheltered canyon of willow and cottonwood, this trail winds through lava flows and red rock to an arch spanning 200 feet. Closed annually from March 15 to October 31

Sand Dunes - One-half mile. Easy. Deep sand with some slopes. Trail leads to a large expanse of red sand serving as a giant sandbox and play area for children of all ages.

Butterfly Trail- 2 miles. Moderate. Some steep slopes, steps and uneven surfaces. Winding along the west side of Petrified Dunes, this trail leads to West Canyon Overlook and lava tubes.

Take Bluff Street north out of St. George through Sunset Blvd and turn left on Snow Canyon Parkway. Proceed for approximately six miles and turn right on Utah Route 8. Drive three miles to the Ranger controlled entrance to the park. Once you pay your entrance fee, continue on the park road and dependant on which routes you are climbing will determine where you park. There are many options.

The sandstone rock at Snow Canyon State Park is not as solid as the lava influenced Black Rocks. As with most of the climbing in and around St. George, you should avoid climbing for at least 24 hours after any rain.

My favorite place for dinner is the sushi bar at Samurai, 245 Red Cliffs Drive. The best breakfast and coffee (Italian espresso) can be had on Main Street at the Bear Paw Coffee Company.

The climbing is good all year round with the exception of daytime during the summer months. If you are climbing anywhere in southwestern Utah during the summer months, you more than likely better get up early and finish your climb early. The walls get brutally hot. That being said, Snow Canyon is at a higher elevation than other immediate Saint George climbing areas (Utah Hills being the exception). In the dead of winter, the warmer climbing is limited to Island in the Sky. 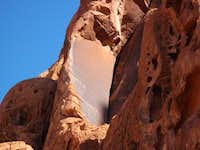