Cerro Pirámide is the third highest peak in Costa Rica with more than 100 meters of clean prominence. It falls just 12 and 5 meters short, respectively, of its neighbors Cerro Chirripó and Cerro Ventisqueros. It's an attractive summit that, unlike Chirripó, is visible from the universal overnighting spot on the high páramo, Base Crestones--and thus is often mistaken for its famous neighbor. The few people who climb Cerro Pirámide almost always do it as a bonus summit after bagging Chirripó. There's a good reward for doing so, as Pirámide has its own unique view, with a better outlook on the Atlantic valleys than Chirripó offers. And, unlike the busy summit of its Costa Rica's highest peak, the top of Cerro Pirámide can be enjoyed in silence and solitude.


Getting to the Area Roadside scenery from the slope of Cerro de la Muerte, on the drive from San José
Most hikes to Cerros Chirripó and Pirámide start in San Gerardo de Rivas, a pleasant mountain village 20 kilometers northeast of San Isidro. From San José, make your way south on the Pan American Highway (Route 2), snaking your way up to 10,942' on Costa Rica's mountain spine and back down to the tropical lowlands; just past the center of San Isidro, turn left for San Gerardo de Rivas. After about 8 kilometers, in the town of Rivas, watch extra carefully for a poorly-marked right turn toward San Gerardo. It's a pretty drive on paved roads, and expats used to mountain driving should be able to handle it just fine. Set aside about four hours. You can also come by bus--the logistics of doing that are described here.

One challenge of the trek to Chirripó and its neighbors is the issue of acclimatization. The first day's ascent directly to eleven thousand feet, although hardly achieving a Himalayan altitude, gets high enough to affect some people coming directly from sea level with headaches or worse. It's best to have a day at an intermediate altitude if you can, before going that high, and San Gerardo de Rivas is too low to qualify. For this reason, travelers coming from San José may want to consider an overnight stop near San Gerardo de Dota on the Pan American Highway (where you can sleep between 7,000 and 10,000 feet) or, at the least, spending a few hours strolling or picnicking on Cerro de la Muerte, a roadside mountain that tops 11,000 feet.

There are three main approaches to Cerro Pirámide. The first--the one surely used by 99 percent of those who climb it--is the Chirripó Trail coming from the west, described in detail later in this section. No guide is needed for that route. A second approach is a newly-opened trail from the obscure village of San Jerónimo Cerro Ena, due south of Chirripó. It is described here. You are required to have a guide for it. The third approach is one that makes a wide swing to the north from San Gerardo de Rivas. It's called the Fila Uran, and it's currently closed.

Both the regular Chirripó Trail and the route from San Jerónimo bring you to Base Crestones, a large refuge that is the only place to overnight near the peaks. Base Crestones has bunkrooms with foam sleeping pads, indoor plumbing, and hot meals. You have to bring your own sleeping bag for warmth. You can have your sleeping bag and other supplies brought up by an efficiently-run "porter" service (actually a nighttime train of pack horses)--anyone in San Gerardo can tell you where the porter office is, or you can call them at 2742-5225.

Chirripó Trail: The Chirripó Trail takes you from San Gerardo de Rivas to the páramo, the dry upland grass- and scrubland above the treeline and above the precipitation belt. On the way, you'll rise though a fascinating sequence of ecosystems. But most hikers seem to trudge through with only their goal in mind, oblivious to the journey, often doing half of it in the dark by headlamp. Don't do that. These mountains have nice summits, but their crown jewel is the cloud forest on the way up. Start at dawn, sure, but make sure you have at least the early morning light by the time your reach the heart of the forest.

The trail begins at the top of San Gerardo de Rivas, next to the Casa Mariposa, at an elevation just under 5000 feet. It runs for 15 kilometers, each one of which is marked and named. The net vertical rise to the refuge is 6200 feet, but when ups and downs are taken into account, the gross vertical ascent by the time you reach Base Crestones is 7100 feet (2165 meters).

The first kilometers get you onto a ridgeline called Fila Cementerio de la Máquina. About three kilometers in, the jungle becomes wetter and lusher; it's time to start looking for wildlife in earnest. It's here if you look: A male quetzal at about 1900 meters elevation


About halfway up, the ridge runs level for a while, but the forest wonders continue. Climbing resumes with a different, spookier variety of cloud forest: Which is inhabited by more critters, including the this Costa Rican quail: Eventually the forest zones give way to dry scrub. The clouds are typically gone at this elevation (you're above their typical level), and the last few uphill kilometers can be in blazing sun. For most people, the first day ends here: There's reliable water at only two spots on the route, first at a ranger station at 7 kilometers, and second at a stream crossing in the sun-baked section at 13K.

Crossing the frosty páramo toward the Nuevo-Pirámide col
After leaving the refuge, there is another 1400 feet (425 meters) left to climb. Most people do this at dawn, when the views are at their best. Follow the signposted trail to Chirripó, which crosses a high desert basin and rises gradually to the col between Cerro Nuevo and Cerro Pirámide, about 4 kilometers from Base Crestones.

From this col, Cerro Pirámide is due east and about 100 vertical meters above. You can bushwhack the ridge to the summit (YDS class 2, a bit of a thrash), or make a class 3 scramble on rock outcrops along the crest and just to its right. Alternatively, continue on the Chirripó trail another half kilometer to the Pirámide-Chirripó saddle. From there, Cerro Pirámide is a class 2 scramble with minimal bushwhacking. In either case, Cerro Pirámide's summit is only 20 or 30 minutes away from the trail.

There are two basics: (1) you have to have a permit to enter Chirripó National Park; and (2) if you overnight (which you should do), you have to reserve a place at Base Crestones. The arrangements have to be made in advance, not on the spur of the moment, and the procedure for doing these two things keeps changing from year to year. Every day, travel-weary people show up at the end of the road in San Gerardo de Rivas, psyched to climb Chirripó the next day -- and discover that the Lonely Planet Guide or website they were relying on was out of date and they are out of luck. As of 2021, the people who have been most conscientious about putting out understandable, current information are the folks at Tikizi.com. Read their excellent guidance at this link. They can also assist you in actually procuring the permits, and their fees are reasonable if you choose to do that.

Camping is not permitted in the vicinity of Cerro Pirámide. You can overnight at Base Crestones, the high refuge a few kilometers southwest.

Where to Stay Before and After

It's hard not to gush about Casa Mariposa, located right by the trailhead. It has imaginative double rooms and hostel beds, idyllic jungle nooks for napping, a cool vibe, and owners who give down-to-earth, accurate advice. However, it is closed in 2021 except for groups willing to rent a whole floor. There is another lodging place at the trailhead, Hotel Urán, but as of 2016 it was inferior in every way (although you might get an ok dinner there).

Other places to stay are scattered down the mountainside, most of them involving a significant amount of extra climbing as you start your trek or else an early morning shuttle ride to the trailhead. On a night when we couldn't get into the Mariposa, my wife and I were delighted with the Hotel de Monaña el Pelícano, described in English here, an especially good oasis for recovery after 7500 feet of downhill. (The Pelícano is connected with the outfitter who has operated the Fila Urán trek in the past--the long, multi-day back route to Cerros Chirripó and Pirámide.) 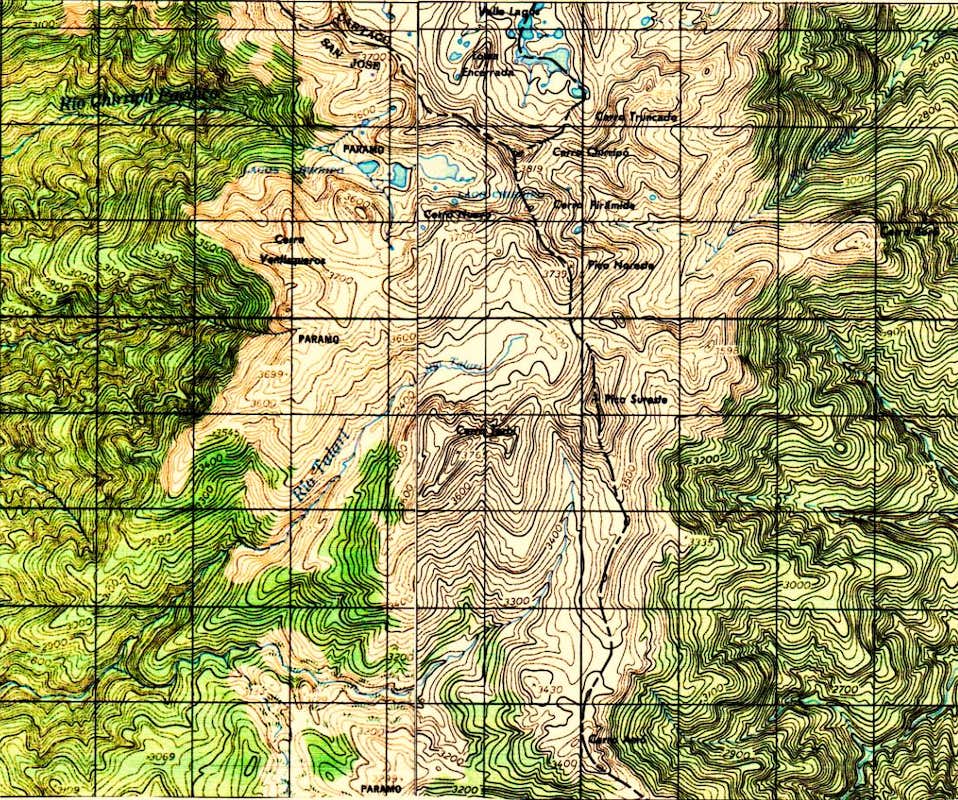 A Costa Rican topo of the summits around Cerro Pirámide. The final section of the Chirripó Trail comes up the Rio Talari and then turns north up the draw leading between Cerro Pirámide and Cerro Nuevo.