The peak makes a nice diversion from the route over Punta Santa Rosa, which is sometimes known as Paso Jurau. Thousands of trekkers or climbers of other higher peaks in the area have viewed this mountain, but apparently relatively few think of climbing it.

The peak sits on the ridge between the two passes that cross the mountains between the two campsites of Quebrada Cuyoc or Cutatambo. Most people reach this area on day 6, plus layovers on the Huayhuash Trek.

By Huayhuash standards, this is a fairly easy peak, but it does require quite a bit of class 3 and class 4 scrambling and there is some exposure.

There are actually two summits of the peak and they are both of approximately equal altitude. Using a GPS we were unable to determine which summit was higher since they are both about the same elevation.

The views from the summit will be spectacular, if you can hit the peak on a clear day. The view to the north is of peaks such as Suila Grande and Yerupaja, which are some of the most spectacular peaks on earth. Unfortunately, they were hidden on our climb, but the views were still very memorable. 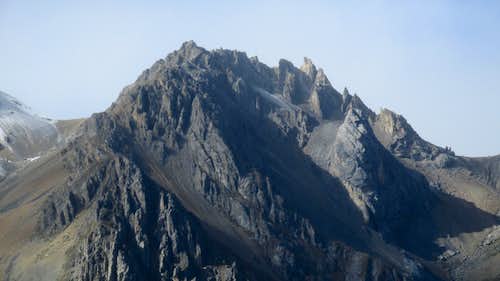 Cerro Santa Rosa from the north. Punta Santa Rosa is just to the left. 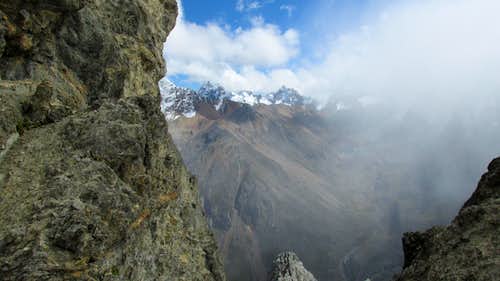 Looking north from a break in the cliffs. 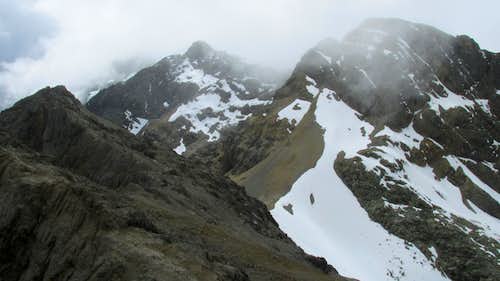 Looking north from a break in the cliffs.

Most people will do this climb as part of the Huayhuash Trek and most people now days start the trek at Quartelhuain. Quartelhuain can be reached from Huaraz by collectivo or private transportation from Huaraz. This takes about five to six hours.

Although most people will do this climb as part of the Huayhuash Trek, there is a faster way in (but you miss a lot of good scenery along the way). A road reaches the village of Huallapa, which is a half days walk to either Quebrada Cuyoc or Cutatambo. I am unfamiliar with this route however. 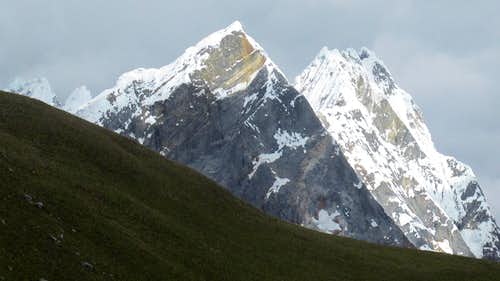 Niñashanca as seen from the trailhead.

Most people climb this peak on Day Six (plus layovers) of the Huayhuash Circuit and en-route from the campsites of Quebrada Cuyoc and Cutatambo. There are two passes that can be crossed when trekking from one campsite to the other. More than likely, the one you want is the eastern pass, known as Punta Santa Rosa or Paso Jurau. The western pass is known as Paso San Antonio. 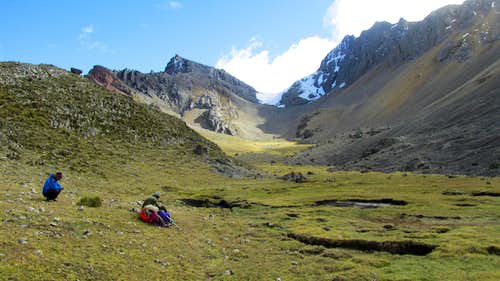 Cerro Santa Rosa, just left of center, as viewed from the south and from the trail to the pass.

The easiest route up the peak is the south ridge. It is easier to get on the ridge early and well before the pass, preferably before reaching 4600 meters. 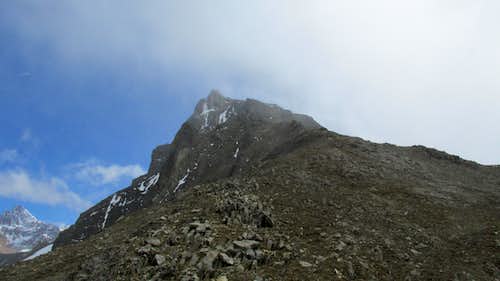 Cerro Santa Rosa from the south. 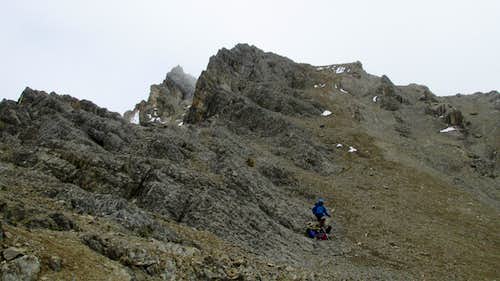 Once you are on the south ridge, follow it, with minor detours, to the summit areas. The route is steep and with some scrambling, but there are no major problems. 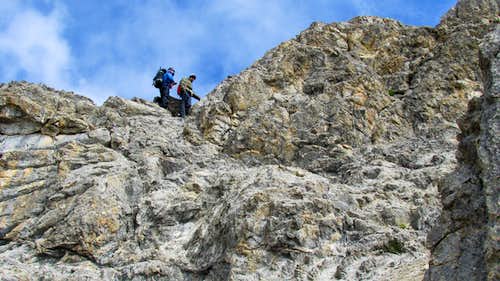 There are actually several pinnacles or points in the summit area. Two of them are contenders for the true summit.

The western summit is a steep scramble. Getting to the very point would require a rope, but it is very loose and dangerous. We were able to climb to within a point where we could reach over within two feet (less than one meter of the summit), but we didn't want to climb the last few feet because we were afraid the summit would collapse! 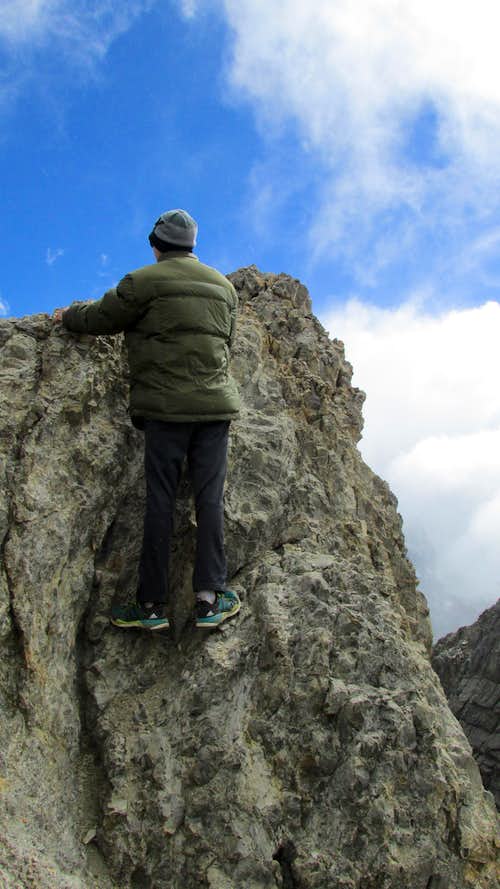 The eastern summit is also a steep scramble. We could sit on this one, but there is still some exposed scrambling required to reach it. 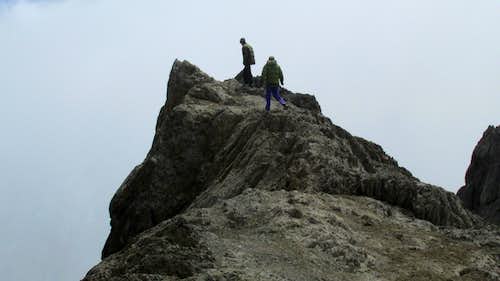 We descended the east ridge and route of Cerro Santa Rosa to the pass. There is some exposed scrambling. Shaylee and I were able to find a rope-less route by skirting around the cliffs, but the route Kessler and Diogenes took required a rope. With some careful route finding and descending to just south and below the pass, you can keep the difficulty at class 4. 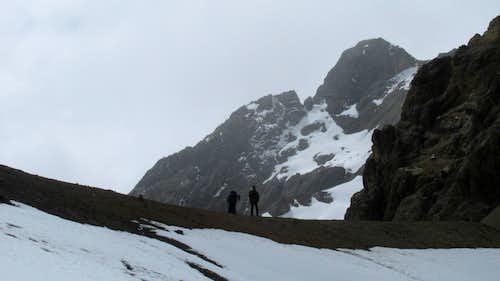 On the Punta Santa Rosa.

It may be possible to climb the west ridge of Cerro Santa Rosa from Paso San Antonio, but it looks rugged, loose, and technical.

There is a trail that descends from the pass all the way to Cutatambo, but pay close attention to the route. Make sure not to drop down too early and the best route descends to the valley floor east of Juraucocha (lake). 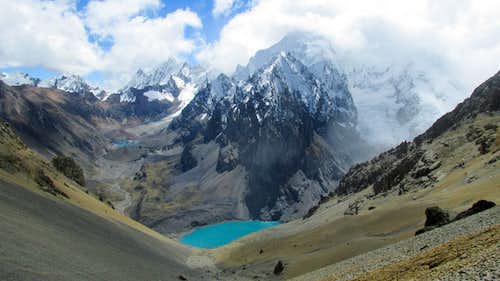 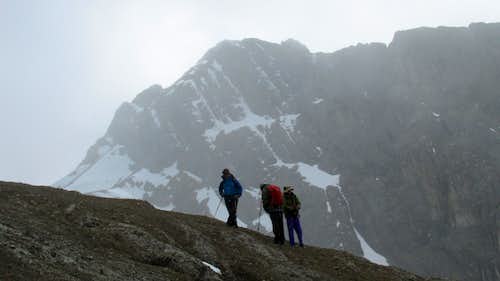 Rain and snow can still happen in the dry season. High on Cerro Santa Rosa with some light snow falling. July 1 2017. 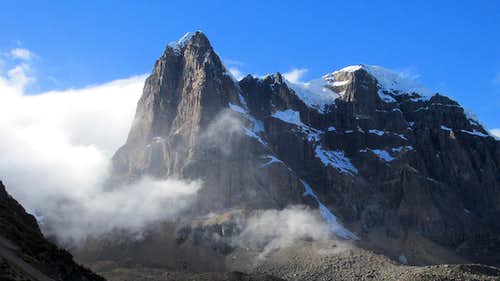 Cuyoc as seen from camp.