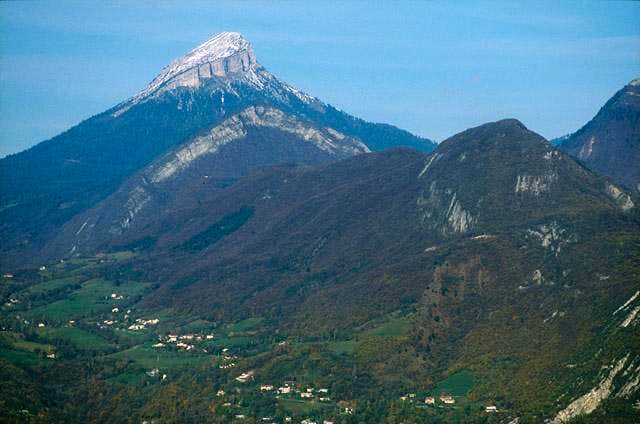 These are the mountains behind the Monastery of the same name-La Grande Chartreuse. They also inspire the well known drink which is made by the monks in their spare time. Some of the summits include Dent de Crolles, Chamechaude 2082 m, Grand Som 2026 m and Mont Granier. These are limestone mountains with rather large precipices, but appear to have walk up routes. St. Bruno founded La Grand Chartreuse Monastery in 1085 in the forest beneath the Grand Som.

[The Massif de la Chartreuse forms an elongated mountainous area some 40 miles north to south and 15 from east to west , situated between Chambéry to the north, and Grenoble to the south. The east flank falls abruptly almost 2,000 metres to the Isère valley, while to the west, the high ground falls away towards the Rhône valley. It is separated from the Vercors upland area to the south also by the Isère river, which swings round to the west at Grenoble on its way towards the Rhône Above the meadows in the valleys, wooded ridges rise up steeply towards steep limestone cliffs. Above these, may be found a hidden world of high altitude plateaus and valleys, vegetated with grassland and dwarf forest.]* The Chartreuse Monastery has been at the foot of Grand Som 2026 m for 900 years. Mont Granier 1933 m caused a huge land slide in 1248. Henri IV sent the monks a recipe for the drink in about 1600 and they have been working on it ever since.

You may reach the Grand Som by walking up east of the monastery to the Col du Frenay and then following the ridge north. The approach to the summit involves some scrambling.

Travel by air to Lyon or Geneva. From there go to Grenoble from Genoble travel a few miles or a few more Km to La Grande Chartreuse. I Thank Claude Mauguier for his good route description.

The western most peak is La Grande Sure. This rises 1 mile above the town of Voiron 6 miles further west: One can take the D-105 north from Saint-Egreve(Just across the river Isere from Genoble) toward the Col de la Charmette(1261 meters). Distance: St. Egreve to Col is about 18km. The col ol is east of La Grande Sure and one has a further 2000 ft of climbing.
Seasonal road closures for snow:
Please note that the road(D-105) is closed to all vehicles for works about 3 km before getting to the col, until the end of june 2006. This road is NOT cleared from snow above the village of Pomarey. Only hikers or skiers might then use it.

This col may also be approached north to south from the church at Saint-Laurent(about 10km distance). This road is quite narrow and one must park the car around the Tunnel of Les Agneaux about 850m. and continue south to the col on foot or mountain bike up the narrow and exciting road with the Gorges du Guier on your left(north east).

Here is Claude Mauguier's account of his ascent to La Grand Sure:
elevation: 1920 meters.

Starting from Col de la Charmette (Nat. Forest road & Hut, 1270 m.), a faint track (a few yellow stripes, not visible in winter) goes gently SW, until the first rock barrier is met. Steeper section from here - about midway - until an up and down portion finally leads to a large alpine meadow around 1600 m high. If you expect to spend a night in the little Bannettes hut, go on SSW keeping above timberline, and the little shelter is there, afoot a large limestone wall, and dominating the Isère valley around Voiron. It is strange to spend an evening in deep darkness while electrical fireworks and car lights are shining far away under your feet...!

Getting to the Col:
Col de la Charmette

May through September looks good. In the winter there is skiing.
The maps include the well known Michelin road maps. Essential are the IGN 1:25000 scale "top 25" maps :

Available almost in every newspaper/bookshop in the immediate surroundings. Grenoble, Chambéry and Lyon large booksellers are of course a good option.

The area is included in the Chartreuse Regional Nature Park.

Chamechaude has 1770 meters of Prominence

I added the altitudes in a separate altiude category. They have been removed from the prominence category.

What i added is the list of Chartreuse main summits with their altitude not their prominence.

I added the altitudes in a separate altiude category. They have been removed from the prominence category.

Please note that the road is closed to all vehicles for works about 3 km before getting to the col, until the end of june 2006. This road is NOT cleared from snow above the village of Pomarey. Only hikers or skiers might then use it.

Available almost in every newspaper/bookshop in the immediate surroundings. Grenoble, Chambéry and Lyon large booksellers are of course a good option.

In the past, I often got myself trapped into some tricky situations, having followed the "Didier-Richard" indications....But well, they perhaps made some progress...

You should move this article to the "areas & ranges" section. Chartreuse is more than a rock or a mountain, it is a "massif"

Hi guys, Could you add a link to my page on Chartreuse hikes? http://andy.bryant.name/hikes/tag/chartreuse Thanks, Andy.

Perhaps you could attach it to the Western Alps ?